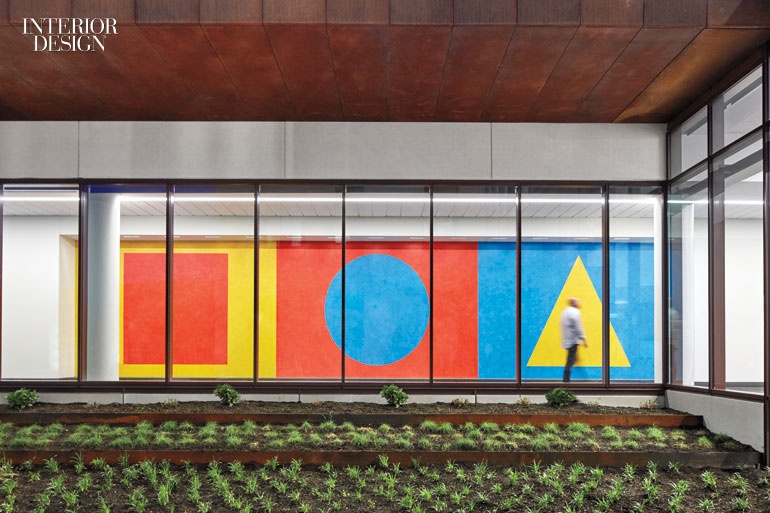 Make the unexpected happen. Embrace the notion of accelerated serendipity. Take in the entire university, indeed education as a whole, not just the MBA track. Emphasize transparency, especially following the last financial debacle. These were among the reams of ideas put forth by University of Kansas School of Business dean and professor Neeli Bendapudi. A visionary who, by the way, received her PhD from KU, Bendapudi headed up the search committee for the school’s new home, Capitol Federal Hall, seeking architects “who would push and position us for where business is going,” she says.

Preparing a proposal for Bendapudi, the Chicago-based Gensler team engaged in research worthy of a doctoral thesis. “We sat around the table and looked at this in a maverick way, as if it were our first academic institution,” principal Brian Vitale recalls. “We also studied business incubators, airports, and religious institutions.” Then came nationwide visits to universities and corporations alike. Additional inspiration came from scientist Louis Pasteur, as paraphrased by principal Todd Heiser: “Chance favors the prepared mind.” That clinched it.

“Neeli was looking for us to build the school from the inside out,” Heiser explains of the four-story, 165,000-square-foot building, which serves both undergraduate and graduate students. Her emphasis on community, connections, and sight lines is “expressed distinctly by the central atrium” he explains. “The staircase is the big gesture.” This striking form in weathering steel zigzags upward through the open space, offering views into the glass-fronted offices, tutoring stations, conference rooms, and lounges for students and faculty. What could be more different from “the typical elevator slicing through stacked pancakes,” as he puts it?

Near the base of the staircase, the atrium floor rises into tiered seating referencing Rome’s Spanish Steps. Like that beloved landmark, this is a place to hang out, see, and be seen. Maybe even more so—KU’s architecture students designed low benches that can be moved across the steps, which are fully wired up. “People congregate around the outlets,” Vitale says with a laugh. Rome reference aside, the tiers also give a nod to the university’s hilly terrain. “Cap Fed Hall’s site is the flattest point,” principal David Broz chimes in. “It used to be tennis courts.” As an alum of KU, he used to play on them.

The atrium is the connector of a plan shaped loosely like the letter K, comprising one angled wing and one straight one. Student spaces, including incubators, occupy the former. The latter, faculty-dedicated, features an office suite for Bendapudi with its own reception area and conference room. Mid-century furnishings, such as a Hans Wegner chair upholstered in KU azure blue, are welcoming and comfortable. She even has a terrace, part of the roof of a volume emerging from beneath the K. Clad in the same weathering steel as the staircase—in contrast to the precast concrete panels on most of the facade—this is an auditorium that, thanks to being partially below-grade, doubles as a tornado shelter.

Steel, concrete, wood, outside and in. “It’s an honest, minimal Midwest palette,” Heiser attests. Polished concrete is used imaginatively, in the middle of the atrium’s floor, to depict KU’s Jayhawk mascot. In fact, sports are such a major part of the school’s culture that Cap Fed Hall is positioned perfectly on axis with the field house where the basketball team plays.

“Students of all disciplines are encouraged to use the building,” Broz remarks. Med students taking an economics course should feel as comfortable as the econ majors do. To attract a diverse population in similar settings, food venues are typically the magnets, but KU already had plenty elsewhere. So Gensler turned to artwork, some of it borrowed from the university’s Spencer Museum of Art. It took two weeks to re-create a Sol LeWitt mural donated by the postage machine manufacturer Pitney Bowes. The geometric composition now transforms what would otherwise be a standard corridor in the student wing into an environment that reads positively gallery-esque. “You feel as if you’re in the middle of the work,” Heiser says, noting that the mural is furthermore painted in Jayhawk-appropriate colors, in the correct proportions. “A lot of blue, some red, a tiny bit of yellow.”

Art insures that the long corridors are places to stop, observe, and com­municate. Mere circulation routes these are not. Broz puts it best: “Learning occurs everywhere.” Consider an installation of boxing gloves, suspended from the ceiling in one of the incubators. “I’ve likened the building overall to a boxing match,” Vitale offers. “The faculty and students come together and mix it up, as if in the center of the ring. When the bell rings, they go back to their own corners.”

For Gensler’s team, the bell rang after three years at KU. The project was completed on time and, fittingly for a business school, on budget.