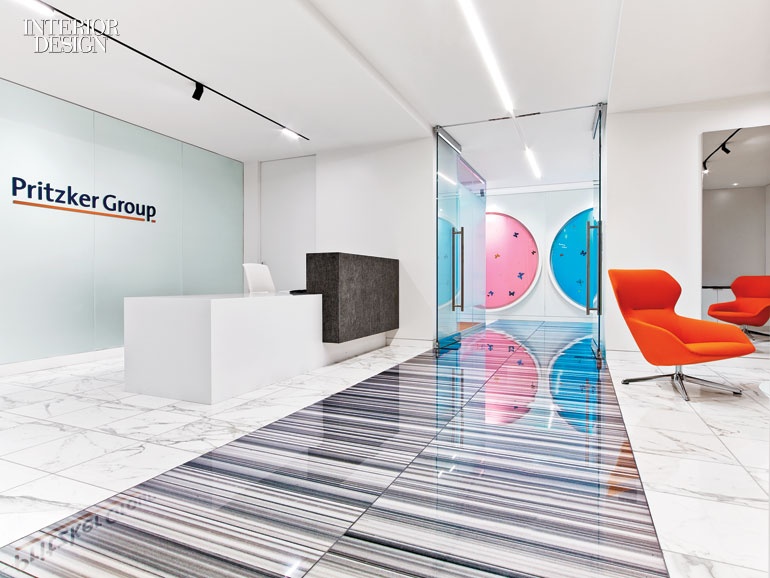 The Pritzker Architecture Prize, the Hyatt Corporation hotel chain, philanthropic efforts in support of early childhood development. Those are well known. But what actually goes on at the Los Angeles headquarters of the Pritzker Group? HOK principal Clay Pendergrast and senior designer Mike Goetz knew the answer to that million-dollar question, because HOK first designed an office for the Pritzker Group a decade ago. The space housed not only the financial services company itself but also a collection of contemporary painting, sculpture, photography, and more. Managing partner Anthony Pritzker also sits on the board of trustees at the Los Angeles County Museum of Art and the board of directors at the Hammer Museum.

When he called HOK back for new Pritzker Group headquarters nearby, a bolder look was his top request. “The art is your wow factor,” Pendergrast responded. Already well acquainted with the fabulous collection, he anticipated more the second time around. A gallery-esque environment would therefore fit the bill. The previous scheme was “50 shades of beige,” Goetz chimes in. “Now we couldn’t get it bright enough.” Gloss paint and solid-surfacing are pure white to offset splashes of the new corporate color, pumpkin orange.

It’s introduced by the wool-viscose on the lounge chairs swiveling in the reception area. And there are often orange flowers on display, though not in a conventional pot or planter. As an artful alternative, they fill a vertical niche in the Cor-Ten steel panel of a wall sculpture. “It’s an element of enchantment you typically don’t get,” Pendergrast notes.

Broad strokes of HOK’s space-planning were dictated by the Pritzker Group business model: The company handles both private equity and venture capital investments, and each operation is clustered on its own side of the 6,700-square-foot space. From reception, follow a runway of gray-and-white striated Turkish marble set into the floor. Then turn either left or right at the end—if the artwork on the wall straight ahead doesn’t stop you dead in your tracks.

Wow indeed. This Damien Hirst diptych comprises two immense round canvases in pink or blue, sporting a constellation of real butterflies and razors. The wall supporting the canvases is the front of the central conference room, used by both sides of the business.

While the Hirst was present at the previous office, albeit inconspicuously installed in a narrow corridor, new pieces are a big part of the picture now. “Seeing how they complete their respective spaces was the biggest thrill,” Pendergrast says. Consider how the quiet geometry of a row of Robert Mangold lithographs complements the clean lines of an office area’s workstations or how an Edward Burtynsky photograph of an industrial landscape explodes in the quiet of a meeting room. At current count, six works were added during the renovation process. New, too, is the furniture. Initially, Anthony Pritzker had hoped to recycle at least some. But that plan was soon quashed by HOK in favor of a different scheme. “We literally took a Pritkzer Group project manager to Chicago to walk the showrooms at the NeoCon trade fair,” Pendergrast reports.

Contemporary art and furniture notwithstanding, the layout follows a traditional scheme of glass-fronted perimeter offices. As for the office of the boss himself, Anthony Pritzker adheres to an open-door policy. And that’s not solely for financial matters—staffers stash their dressy clothes in his closet for evening events. Workstations are inboard, with casual meet-ups occurring at the benches scattered between.

No, a financial services office doesn’t technically qualify as a “creative workplace.” Nor is there any suggestion of an adult playground here—with nary a Ping-Pong table in sight. However, the Pritzker Group was looking to create the sense of community more associated with an advertising agency or a tech-start-up. A generous pantry is the heart of the space, like in a home. Yet how many homes have a kitchen that serves up a choice of bleacher seating or communal table? The message is reinforced by sections of vinyl flooring in Pritzker orange.

Team lunch meetings take place in the pantry. The ability to work anywhere being another creative-workplace tenet, HOK provided plenty of options. Employees can grab a laptop and head to those orange swivel chairs, which appear both in reception and, for private conversations, in the chic phone room. Then come the conference and meeting rooms, both so meticulously detailed that not a data port or electrical outlet is visible. “I strive to focus on every little thing,” Goetz says. “It was invigorating to work with a client who had the same appreciation.”