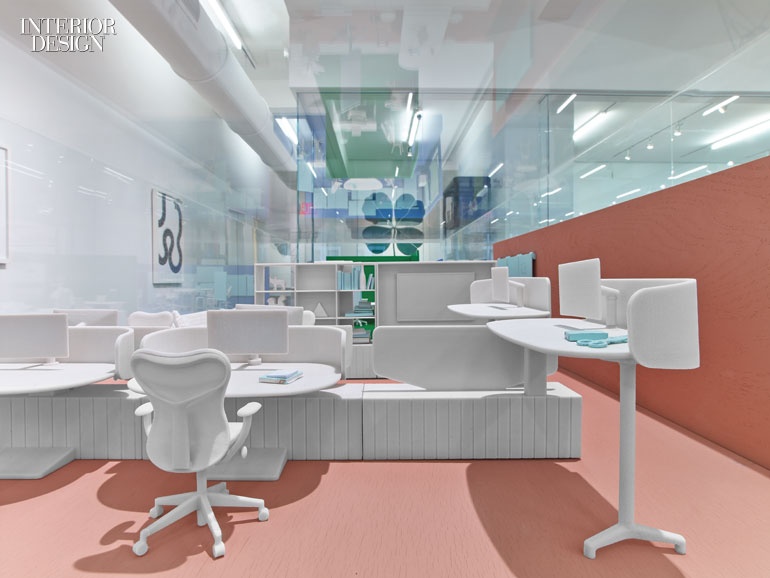 It has to be daunting to design showrooms for Herman Miller, the Michigan-based furniture giant often cited as the inventor of the modern office. But Vincent Bandy came with some impressive credentials of his own. For one, he was a veteran of Rem Koolhaas’s Office for Metropolitan Architecture. Furthermore, Vincent Bandy Architect’s portfolio already included Vitra’s highly regarded showroom in New York.

Bandy’s latest Herman Miller project, also in New York, is in the same 1909 office building where Maharam, the fabric manufacturer now owned by Herman Miller, occupies the triplex penthouse. His assignment has consisted, so far, of levels two through five, 30,000 square feet dedicated to showrooms for the parent company and another acquisition, Design Within Reach. On the ground level, he’s due to complete Herman Miller’s first permanent retail store in North America this fall. (On five, Geiger International occupies a space outfitted by a different firm, BassamFellows.)

Herman Miller executive creative director Ben Watson was previously at Moroso, and that’s how he met Bandy, then working on OMA and REX’s Dee and Charles Wyly Theatre in Dallas. The pair’s collaboration on the theater seats launched an on­going professional relationship. After Watson moved to Herman Miller, he engaged Bandy to design showrooms in Washington and Dallas.

Compared to those projects, New York presented greater challenges, among them the building itself—mostly vacant for decades and seriously out of date. The brief was to create a cohesive envelope for all five levels while still providing individual identities for each. Roughly speaking, the showroom on two highlights home design, the one above concentrates on contract clients, and DWR shares the next one up with the company-wide “brand design” studio, a kind of lab for the in-house creative team. Vertical access had to be easy, since there’s a strong connection between Herman Miller’s residential and commercial aesthetic, a look that honors the enduring influence of mid-century pioneers including Charles and Ray Eames, George Nelson, and Alexander Girard while celebrating contemporary talents.

Senior interior designer Stephen Floyd was in charge of the furnishings, either manufactured or repped by Herman Miller. “Besides displaying the furniture, lighting, and rugs, our Living Office guidelines dictated a variety of functional stations for the people who actually work here,” Floyd says.

Bandy continues, “One of the most important mandates for these showrooms was to sell furniture, not architecture.” The strategy he developed with project architect David Theisz was therefore to keep interior surfaces simple and clean, taking advantage of the massive amounts of sunshine. Cumulatively, everything suggests a blank white canvas waiting to be filled. Power and data cables are hidden beneath the raised floors to reduce visual clutter, and the old cast-iron radiators have been removed.

“There was an exceptionally eclectic mix of radiator sizes and types, remnants of past renovations,” Theisz explains. Hiding the HVAC system below the floor was considered, too, but ultimately rows of tubular ducts were installed along two walls. To help with air circulation, the enormous inoperable windows were replaced with casement versions that open.

Visitors arriving via the elevators or the stairs step onto wide-plank flooring with a chalky finish, the same product Renzo Piano Building Workshop used for the Whitney Museum of American Art nearby. The rest of each floor is covered in dove-gray carpet tile, modular to facilitate the occasional reconfiguration of display and office areas. To the side, a row of glassed-in rooms can serve variously as conference venues or offices, even serving stations for social events.

“We introduced a dialogue between the perimeter enclosure, the urbanity of the city beyond, and the color and detail of the furniture,” Bandy says, going on to stress the importance of maximum flexibility. “The spaces have to work for every single purpose we can think of now.” In ways he can’t even imagine yet.