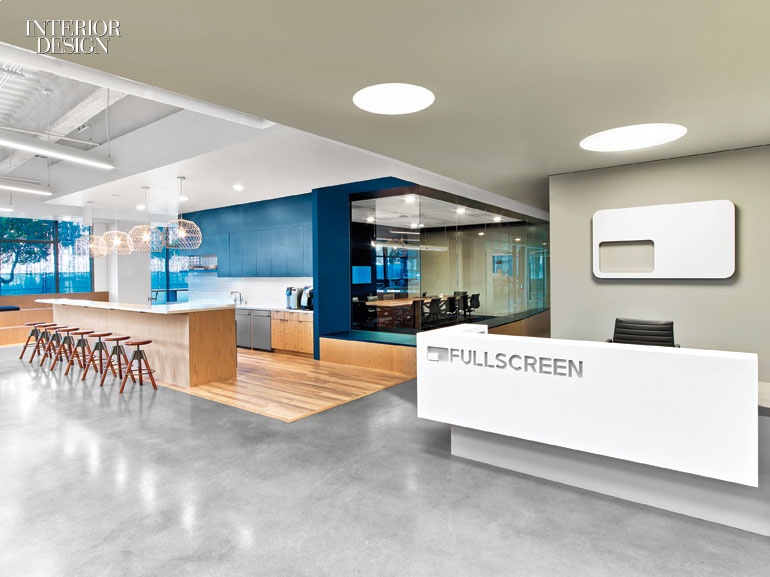 With Fullscreen virtually bursting out of its Los Angeles headquarters, a mere half a year old, Rapt Studio president and design director Sam Farhang tackled phase two, 18,000 square feet nearby. Since Farhang had devoted such care to developing the company’s visual identity at the HQ, the motto for the satellite was: Don’t stray too far out of sight. The plan for workstations remained constant, with custom versions in oak and powder-coated steel mostly lined up by the windows. Meeting rooms and private offices are distinguished by elaborate wallpaper, some with deep blue tones linking to the mother ship. “This location is all about postproduction and gaming, more male-oriented,” Farhang explains. Yet it doesn’t read overly brawny or heavy—not when he reprised such light touches as the snowy-white reception desk and wire pendant fixtures.

But the story doesn’t end there. Ever in expansion mode, Fullscreen decided it was ready to make its New York debut. “That’s where the luxury got dialed up,” Farhang says of the 14,000-square-foot space. Reception feels like a lounge, thanks to Claesson Koivisto Rune’s ample leather-upholstered sofa and the convertible pool table. The company’s signature blue still appears but in deeper tones. And the all-important pantry’s ash-veneered cabinets and blackened-steel details skew more city chic.

> See more from the May 2016 issue of Interior Design