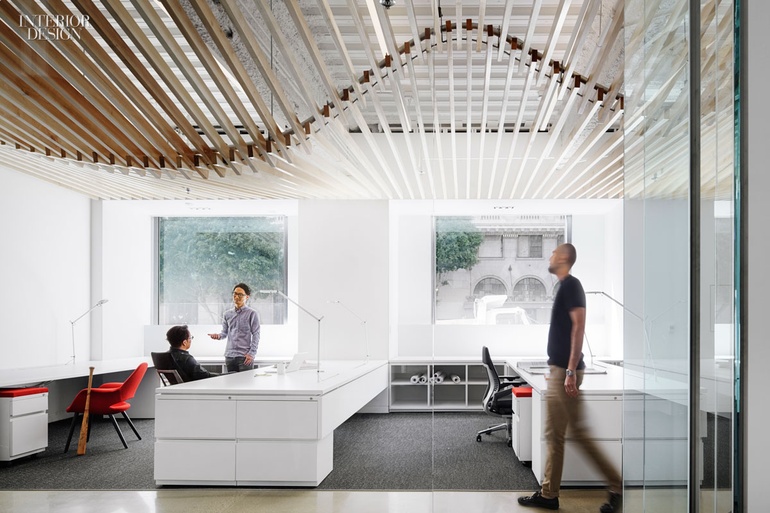 “It’s just a little project downtown,” Philippe Paré demurs. But knowing Gensler, where Paré is a design director, we suspected that said “little” office would be packed with big ideas. Suspicion became certainty when we found out that the client-collaborator was Turelk, a Los Angeles general contractor.

Turelk was fortunate to snag a street-front space in the burgeoning neighborhood. The location is furthermore only a half mile from Gensler’s own office, ideal since the two frequently collaborate. And that’s where the pluses ended. Previously a law firm’s dead-file drop, it was dark and dingy with black-painted windows and a funky split-level setup. Paré was undeterred, however.

He took the most basic element of construction, the two-by-four, and turned it into a thing of complex beauty, an eye-popping canopy that’s a sort of contemporary sculpture meets prehistoric skeleton. “It promotes what Turelk does—the love of craft and detail and the hands-on approach to its work,” he says. Steel cable was threaded through 200 planks, then attached to bent steel pipe suspended from the ceiling. LED linear fixtures above the canopy illuminate it as it undulates most of the way across the 2,700-square-foot space, flattening out over the workstations at the window wall.

Through the entry’s extensive glazing, now clear, the first sight to greet staff and visitors is not a standard reception area with a desk. Instead, there’s an open pantry. “The fridge is stocked with beer,” he says. “This is basically a guy’s space.” To one side, up four steps, the public zone can expand when the trio of glass sliders fronting the conference room stack away. That’s very useful, since the office has become an after-hours hub for the downtown design community. Cue those frosty Budweisers.