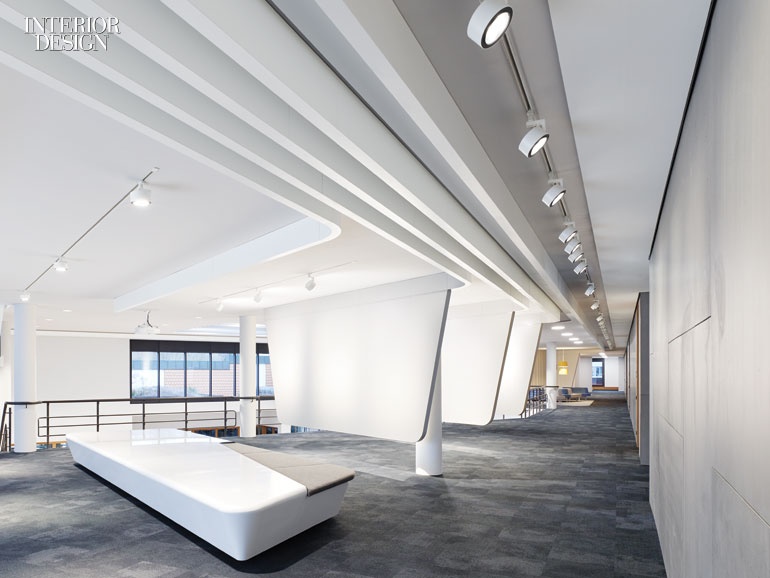 In a business that spawns start-ups by the minute, SAP is a wise old dog. The German software developer got its start in 1972, when five engineers from IBM released a program that helped put the punch-card payroll system out of business. Now SAP has annual revenues topping $22 billion. Yet while the average employee age remains on the youthful side, around 38, much of the sprawling headquarters complex in the southwestern town of Walldorf was showing signs of age. So in stepped Scope Architekten, which started out five years ago with a pilot program to reinvent SAP office space and has now completed six separate projects for the company—with four more in Walldorf and an innovation center in Potsdam currently in progress.

Notable among recent jobs tackled are the public areas in SAP’s training center, occupying 39,000 square feet in a three-story building from 1987. “SAP is a dynamic company, but the building didn’t represent this,” Scope partner Mike Herud says. His partner, Oliver Kettenhofen, adds, “It was just nothing special, really cheap.” So they presented a plan that would both reorganize function zones and introduce agility and flexibility more in line with the building’s intended population of savvy young programmers, likely to carry a laptop into any and all corners.

Programmers invited to the training center are furthermore, by definition, mainly unfamiliar with the campus and often the country—SAP client companies span 190 different nations on six continents. Way-finding was therefore particularly important. In the entry atrium, visitors are immediately greeted by a 23-foot-high multimedia screen that, with the mere swipe of a finger, provides both a floor directory and information on upcoming meetings and local events. “When you turn it off,” Kettenhofen says, “it’s a black mirror.”

The screen is located on a multi-level seating platform where people often lounge. Herud calls it “a little park in the city,” giving a central focus to a space that was previously, in Kettenhofen’s words, “only a really big room.” The platform’s contrasting stripes of pale ash and darker oak also serve as a low-cost cover-up for part of the granite floor, which budget limitations didn’t allow for replacing throughout. A skylight had to stay, too—white fins installed directly beneath now temper the “greenhouse” glare, Kettenhofen says.

Overhead planes received special attention almost everywhere, he continues: “We really utilized the ceiling, because it is the biggest unobstructed surface in a room.” Ceiling-mounted ribbons of white solid-surfacing help to define two mezzanine spaces, a gallery for local artists and a lounge. And the 350-seat cafeteria has become a popular alternative work space, thanks to an acoustical ceiling that wiped out a debilitating noise problem. Swaths of plasterboard, either black or perforated white, are installed at two different heights, thus visually zoning the seating options—with the help of the cheerful greenery topping partitions. He and Herud paid particular attention to the varying degrees of privacy in the seating areas. “It’s a huge space we needed to make small, otherwise people get lost,” Herud says. The low booths are more intimate, versus freestanding tables that seat up to eight and, most public, a coffee bar that forms an island in the middle of the cafeteria. Drawing all eyes is the coffee bar’s cluster of existing Poul Henningsen pendant fixtures that have now been lacquered in teal. “Like a car,” he notes. Espressos are consumed at a V-shape counter-height table.

Some spots at the coffee bar offer a glimpse of sky blue, across the room. This splash of bright color, recessed into a black wall, turns out to be upholstered panels cladding the back wall of a seating niche. It’s perfect for visitors making phone calls back to home base. “People used to eat and leave. Now they often stay the whole day,” Kettenhofen says. How’s that for reprogramming?