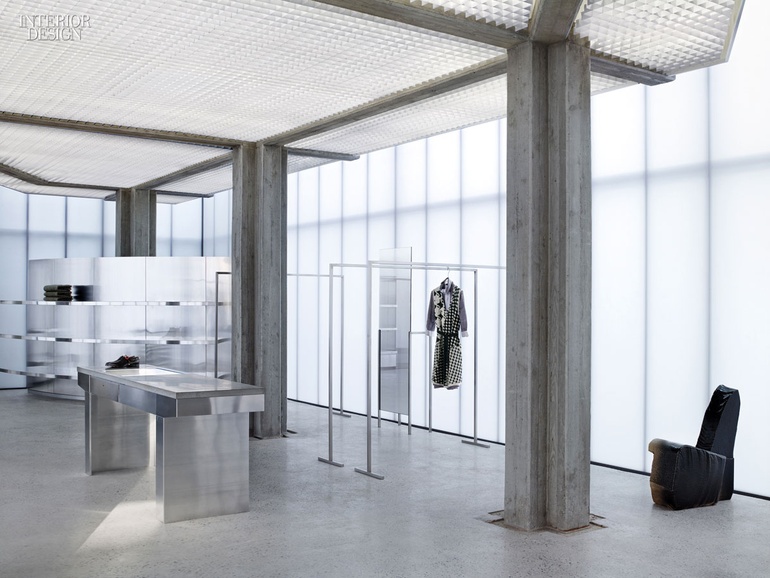 The Gangnam district of Seoul was single-handedly catapulted into the world’s consciousness by the horse-trot dance moves and universally catchy beat of Psy’s self-deprecating video for “Gangnam Style.” Four years later, this poke at the lavish lifestyle of the toniest district in the South Korean capital holds tight to its position as the most popular YouTube video of all time. Satire or no, style there certainly is in this luxury retail wonderland, home to boutiques for Chanel, Christian Dior, Gucci, Prada, Louis Vuitton, and more.

A glimpse of signage beckons shoppers down a side street near the river to find still another label, Sweden’s ACNE Studios. (That’s an acronym in English: Ambition to Create Novel Expressions.) ACNE creative director Jonny Johansson brought in Sophie Hicks Architects from London to design the freestanding building after admiring the firm’s worldwide Chloé boutiques, paneled in raw plywood. To set off ACNE’s bold, multicolored clothing for both women and men, statement pieces that Sophie Hicks calls “very punchy and, at the same time, forward-thinking,” she envisioned a two-story structure resembling a ghostly light box with “very little outward expression.”

From vision to completion, the project took just one year. “There’s almost no planning or heritage permission required in Seoul,” she notes. So there was no pushback to her idea of making the rooftop an explosion of steel ducts and pipes, the exposed innards of the HVAC system. “It’s my little joke about the chaos on the roofs of Asian cities,” she says. Below the roof, the facade is fiercely minimalistic, clad in translucent white polycarbonate. During the day, the polycarbonate combines with the city’s heavy smog to impart a misty quality to the sun filtering into the 2,500-square-foot interior, making its spareness immediately striking. The sensation of solitude is extremely rare in this city of over 10 million, its population density furthermore nearly four times that of Stockholm.

Concrete board-formed to evoke wood weathered by sea air, like a boardwalk in the Stockholm archipelago, appears throughout starting with the 13-foot-high slab that stands at the entry to display the ACNE name. A sharp Swede might notice  something curious about the plantings at the foot of this brutalist signage. Carefully curated, all are Swedish plants or types very similar—including wild strawberries. “The only thing they have to do is survive the really hot summer,” she says.

Also concrete are interior walls, structural columns, and, spiraling around one of them, a staircase linking the separate women’s and men’s levels to a partially subterranean level with additional fitting rooms, an office, and storage. It was quite a challenge to make the stair stand out as a contrasting element while using the same heavy material, she says: “It had to be light and airy. Look, no hands!” Deconstructing the concrete balustrade into free-floating chunks helped to accomplish that.

Display fixtures introduce brushed aluminum to the materials palette. It appears in the form of three table bases—the tops are concrete—as well as a unit with drawers for the jeans that were ACNE’s first claim to fame, the cash-wrap desk, and two curved volumes that combine fitting rooms and storage. These volumes support curved shelving, and clothing hangs from equally understated, slim racks nearby.

An absence of typical furnishings contributes to the atmosphere of serenity and escape. The only other furniture is a collection of seating by a fellow Londoner, Max Lamb. “Clever, lumpy little pieces,” Hicks deadpans. Lamb carved the irregular forms out of polystyrene, then used an industrial sprayer to cover the surfaces with rubber in muted colors. This treatment makes an otherwise flimsy material extremely durable without concealing the interesting nooks and crannies.

Virtually unheard of for retail environments, the store does not have a single spotlight. The ceiling’s white powder-coated steel grid creates an even wash of illumination similar to daylight by making the light from fluorescent strips, installed above, bounce back and forth. “We specified a system where all framing is invisible, held from behind on little hooks,” she says. “And the panels are quite big, so you don’t have too many joints.”

The clean ceiling planes and the interior’s stripped-back state overall are of course facilitated by piling mechanicals on the roof. (All architectural in-jokes aside.) Exceptions, at both end walls, are the banks of aluminum diffusers. Unabashedly displaying the manner in which hot and cold air is supplied, the system could almost be an art installation. And that impression is only deepened by the slightly disorienting music that’s perceived at varying decibel levels—the speakers are hidden behind the structural columns. “You walk into sound, then out of it,” Hicks explains. We’re worlds away from a horse-trot, Gangnam-style.