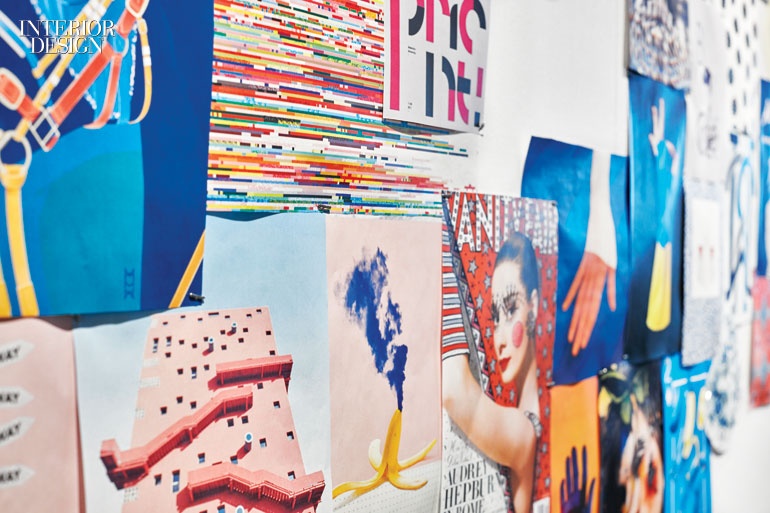 A scion of the Edelman Leather family, Sam Edelman also counts Ralph Lauren, Calvin Klein, and Kenneth Cole as mentors. Sam & Libby, the namesake footwear company that Edelman founded with his wife as creative director, was their joint entrance into the fashion world. Then came a more diversified label, simply Sam Edelman. Add to that accessories and more footwear, called Circus by Sam Edelman, and it was time to consolidate all three brands, now owned by shoe manufacturing giant Caleres, under one New York roof.

“We had a wonderfully eccentric Old Woman Who Lived in a Shoe office,” Edelman recalls fondly. “With chandeliers.” Not to worry. The new Gensler-designed headquarters—a 1989 Kohn Pedersen Fox Associates office tower’s former mechanicals penthouse, 15,000 square feet, plus 3,000 square feet of design studios below—still embodies the “irreverent spirit of the Sam girl,” he says.

Gensler principal Jean Ander­­­son also made references throughout to Edelman’s love of barns. (For horses. He even buys and sells show-jumpers.) Recycled oak veneers the box beams suspended in the elevator lobby on the main level. A partition is constructed from blocks made with recycled wood scraps. Reclaimed planks conceal the concrete floor slab both in the three separate brand showrooms and in his corner office.

The oak tops of executive desks incorporate decorative butterfly joints. “Sam & Libby shoes are very detailed, so we got out in front of the interior detailing, too,” Anderson explains.

Much of the seating came from Design Within Reach, where Edelman’s brother John is CEO. There are exceptions, however. Various white slipcovered sofas used to inhabit the Edelmans’ country house. And Edelman found the kitchen’s rustic stools, pulled up to an island in figured walnut, while he and his wife were visiting their daughter in Idaho. All in the family.