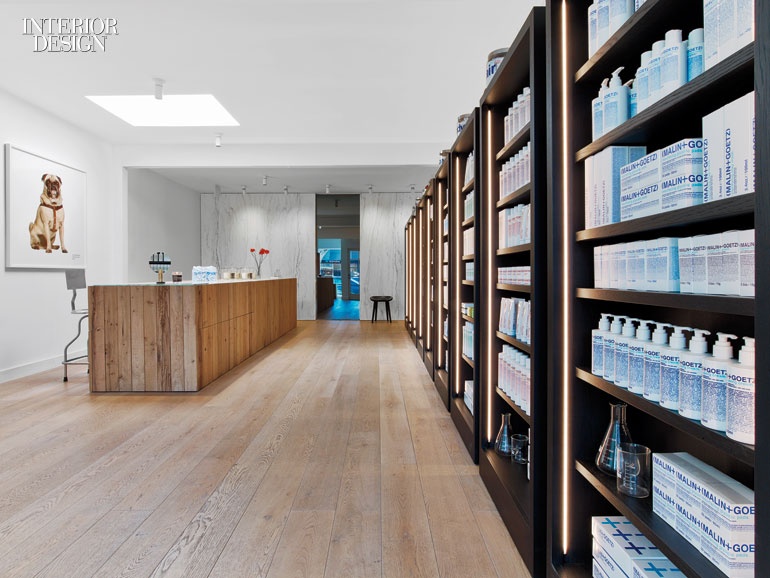 Call it an anomaly. Instead of jumping on the bandwagon of exponential retail expansion, with flashy branding and multiplying arrays of product lines, Malin + Goetz founders Matthew Malin and Andrew Goetz—partners in life as well as business—have continued to opt for restraint, sticking to skin-care and hair-care products with a vaguely “apothecary” feel, plus brightly packaged scented candles. Brian Messana and Toby O’Rorke should know. Their firm, Messana O’Rorke, has designed a trio of Malin + Goetz shops since 2014, one in New York and two in Los Angeles. This could be a case study on controlled yet steady growth.

“Each space feels unique. That’s important for us,” Messana says. Motivation to establish clear differences grew stronger during the conception of the two L.A. projects, built simultaneously in Santa Monica and downtown, when he and O’Rorke took a trip to Paris. “Walking through the Marais, we saw these little stores where I could buy stuff I couldn’t find elsewhere,” Messana continues. So while every Malin + Goetz setting features certain components for brand recognition, each is also an individual response to a particular location and customer type. The store in Santa Monica occupies a charming cottage, clapboard siding, dormer windows, and all.

The store downtown, aka gritty DTLA, is part of a sprawling mixed-use complex completed just last year by Michael Maltzan Architecture. The New York site is a tiny storefront in a residential neighborhood near Central Park. Taken together, they offer a complexity of vision tempered with subtle consistency.

Most challenging was the Santa Monica project, even though it was a homecoming of sorts for Messana. “I grew up there and went to SaMo High,” he says. In addition to the notoriously difficult local permitting process, the problem was what to do with the relative surfeit of space, 800 square feet. “Compared to the others, it was huge,” he continues. “We eventually decided that the beauty would be to let the space be space.” Crisp white paint and pale oak floorboards are light and beachy. The floor is almost completely bare except for the freestanding cabinets forming a row parallel to one sidewall. Though the cabinets aren’t double-sided, customers are inevitably drawn into the narrow space behind—perhaps fascinated by the glow from fluorescent tubes affixed vertically to the wall. If they look like a Dan Flavin light installation, that’s intentional: Messana and O’Rorke are both admirers. Also mounted and lit with care worthy of a museum is a cheeky photographic portrait of the owners’ pug, Mr. Greenberg.

While the Santa Monica space is a typical rectangle in plan, downtown presented a tiny right triangle. Its hypotenuse is formed by the angled path of a covered passageway leading from the street to the central courtyard of the complex. Along this walkway is the store’s entry, announced by elegantly restrained backlit aluminum signage, but there’s also a street-facing window wall, so Messana and O’Rorke filled it with a display fixture dynamic enough to catch the eye of people in cars. Gleaming in white powder-coated steel, this tall unit then snakes its way around the perimeter of the 400-square-foot shop, never quite touching the walls except where anchors are required for seismic reasons. Other elements are suitably industrial, playing to the anticipated hipster clientele: concrete floor, exposed ceiling slab and mechanicals, fluorescents again.

The latest New York store, also 400 square feet, packs in much more luxury. A stunning slab of book-matched Italian marble stands 16 feet high at the rear of the space—a towering presence made possible by the removal of a mezzanine used by the previous tenant, a dry cleaner. Set into the marble is a brushed-aluminum unit displaying candles in a colorful grid. In front of the slab sits the cash-wrap desk found at the three locations: a hefty and straightforward volume built from reclaimed oak planks and topped by marble. Beauty products, meanwhile, fill freestanding cabinets super-tall like the city’s skyscrapers.

Though Messana hails from Santa Monica and O’Rorke from Scotland, it’s in New York that the architects and clients are all based now. In fact, everyone but Messana used to live on the same block. Their fateful first meeting took place one day when O’Rorke was walking his Jack Russell terrier, Agnes, and Malin and Goetz were out with Mr. Greenberg’s predecessor.