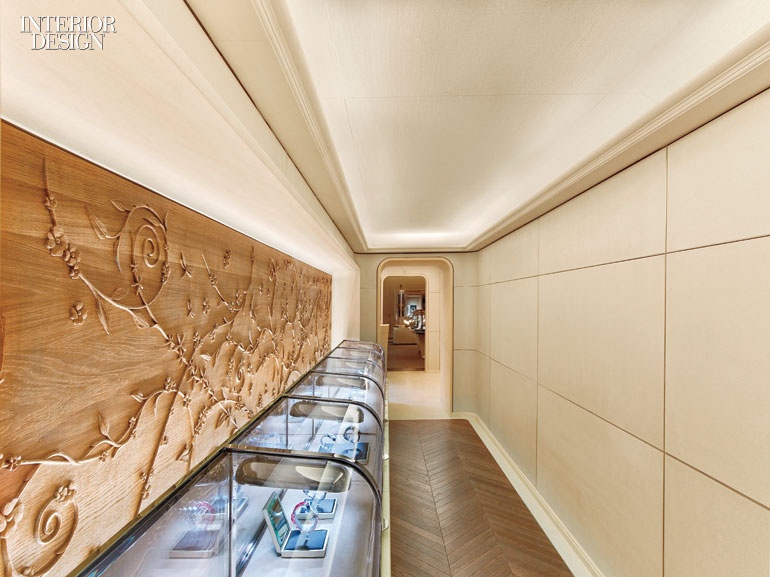 Astonishing staircases have become signature elements for the firm of Jouin Manku. The stair for a Van Cleef & Arpels boutique, the latest in Paris, is a witty wink at the grandeur of France’s ancien régime staircases. While one balustrade is typically contemporary waist-high glass, the other is a towering wrought-iron latticework composition based on the crisscross tracery of a butterfly wing. “Working on that staircase was a gigantic joy, like being a kid in a candy store,” Interior Design Hall of Fame member Patrick Jouin says.

The design is also a technical tour de force. Seemingly afloat, with no visible means of support, the cantilevered steps sweep sinuously upward, reflected in mirrored walls. The basic structure is composed of limestone blocks CNC-milled, pierced, and threaded with steel cable. “Then we tightened the living daylights out of them—until they were virtually a single piece,” Sanjit Manku explains. All that occurred off-site, after which the stair was trucked in, squeezing through the entrance by a hair. Jouin sums it up with a grin: “Completely crazy!”

Jouin’s collaboration with Van Cleef & Arpels began in 2006 when he renovated the original store, founded in 1906 on the Place Vendôme, a showcase for the world’s great jewelers. He and, later, Manku went on to design the company’s boutiques in New York and Hong Kong and jewelry ex­hibitions in Paris, New York, Shanghai, and Singapore. The new Paris boutique is right next door to the original.

Though formerly occupied by another jeweler, Mauboussin, the two-level, 3,000-square-foot space was ill-suited to the purpose. “There were different sizes and proportions everywhere. Nothing was beautiful or comfortable,” Manku says. There was certainly no stunning staircase. The old stairs had been removed years ago, and the upper level was not open to the public. So he and Jouin reconfigured the layout to accommodate a staircase in addition to removing a column that would have obstructed the new front salon upstairs.

Elements of previous Van Cleef projects are incorporated here, including arrays of display cases in dome or bread-box shapes. Installed in a corridor, an oak panel delicately carved with vines and dragonflies is a visual quote from the boiserie that dominates next door. The most important inspiration for the new premises, however, was the Place Vendôme itself. When this splendid public square was completed by Louis XIV’s architect Jules-Hardouin Mansart, the limestone buildings were mansions, and Jouin Manku’s goal was to recapture the rarefied elegance of their cosseted salons. As Manku says, “We kept everything on the scale of a kind of fairy-tale residence, a privileged space.”

He and Jouin restricted their color palette to white, cream, beige, gray, brown, and burnished gold and the materials palette to limestone, oak, polished nickel, glass, plaster, and silk, often used in un­expected ways. Plaster wall panels are textured to resemble linen. The leaf-patterned plaster of the first jewelry salon’s ceiling panel is echoed in the “heritage” salon, displaying vintage pieces, by a ceiling panel surfaced in silk exquisitely embroidered with leaves.

Dark-smoked oak not only appears in the form of parquet but also turns up backing display niches and paneling the walls in the VIP salon.

The limestone, although Portuguese, is very similar to the pierre de Paris quarried to construct much of the city, including the Cathédrale Notre-Dame and the Pont Neuf. At Van Cleef, the stone is finished with an extraordinary silken sheen, setting the standard for the boutique’s remarkably sensuous appeal. Almost everything is rounded, curved, spherical, smooth, and soft to the touch.

That goes for furniture, too. Ample armchairs are padded and leather-upholstered. Desks have boomerang-shape tops with leather set into creamy solid-surfacing that resembles lacquered wood yet offers the greater durability crucial in avoiding unpardonable signs of wear and tear. A long display table—topped with black plastic laminate so sleek it cries out to be stroked but never shows a trace of finger markings—can double as a dining table for corporate events.

A onetime ugly-duckling space, the long and narrow passageway upstairs, is now a showpiece library. That’s thanks to smoke and mirrors—or rather smoked mirrors. They back the glass cases that line both sides of the corridor, displaying books, drawings, photographs, and other company memorabilia.

Jouin and Manku “completely understood the essence of Van Cleef & Arpels,” president and CEO Nicolas Bos says. “They are always concerned with craftsmanship and artistry.” Just like jewelers.