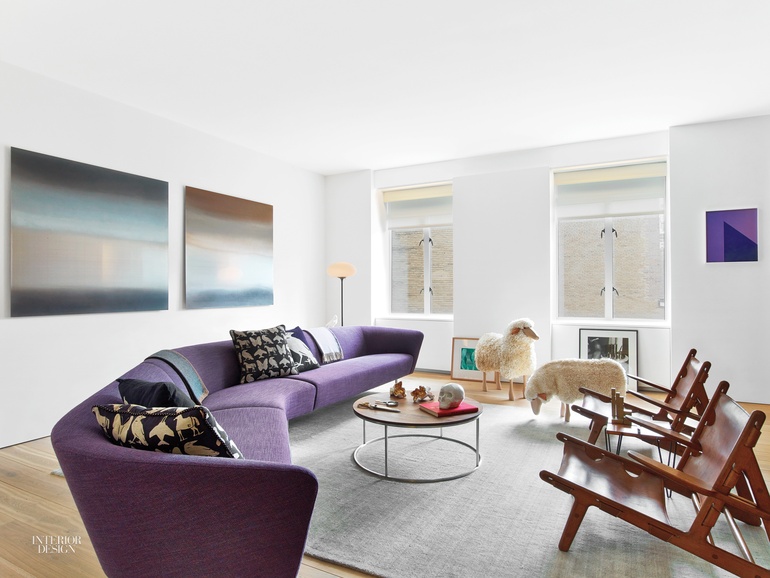 When a project goes bust, it’s sometimes a blessing. At least that was the case for Brian Messana and Toby O’Rorke, partners of the New York firm Messana O’Rorke. The architects had just completed the schematics for the redesign of Kevin L. Ramza’s Upper West Side one-bedroom…only to learn he’d decided to sell the place. The next-door neighbor, itching to expand, had made an offer he couldn’t refuse.

But then Ramza found a new place that was superior in nearly every way. True, the 1,150-square-foot apartment was a wreck when he bought it: largely untouched since a 1970s remodeling, with worn and outdated fixtures and finishes (think shag carpeting in the bath). A gut renovation would be necessary. But the L-shaped one-bedroom was located in the Majestic, an Art Deco landmark fronting Central Park, and boasted glorious light and generously proportioned rooms. It was also almost 300 square feet larger than his old place. And when Ramza circled back to the architects, he was ready to start afresh—really ready this time. “His mind was clear,” notes O’Rorke. “He had no preconceived ideas about the new space because he’d never lived in it. The design process was much more fluid this go-round.”

The architects kept the basic flow of the original layout. The living area forms the heart of L-shaped space, with the entry and kitchen on one side and the bedroom on the other. But rooms are now separated by what the architects call “containers”: sleek, high-efficiency enclosures concealing, well, just about everything—from bathrooms to books, clothes to flat-screen TVs—behind sliding or touch-latch doors.

A container between the entry and the kitchen holds a coat closet, refrigerator, and pantry. Another container mediating the kitchen and living room cleverly integrates an office, enabling the client to check emails and pay bills, and then—presto—close the door to hide the computer and stacks of papers and magazines. A third container, clad in black walnut, buffers the bedroom from the living area. It houses the master bath as well as a powder room with hidden, stacked washer/dryer—not to mention a Murphy bed. Ramza initially desired a second bedroom as a landing pad for weekend guests. But the architects, known for their calm, minimalist designs, argued against chopping up the space for the sake of occasional company.

As is always the case with Messana O’Rorke interiors, there’s a lightness to the design. With storage relegated to the containers, there’s nary a sideboard, bookcase, or dresser in sight. Doors hover ¼ inch off the floor. Walls appear to float, thanks to vertical cove lighting recessed invisibly in the corners. Seven-inch-wide planks of ethereal European white oak cover the floor. For continuity, the walnut slats paneling the main container share the same profile.

The rich walnut gives the apartment a woodier look than is typical of Messana O’Rorke interiors. “We’ve always been known for being all about white,” says Messana, who admits to having mellowed somewhat now that their firm has reached the two-decade mark. “With each project, we try to do something a little different. We’re constantly developing from the last project, constantly investigating.”

However, lest the living room’s aubergine sofa suggest the architects have gone gaga for saturated color in their maturity, rest assured: That piece was Ramza’s choice, with input from his partner, a literature professor who maintains a  residence in Montreal but comes to New York regularly. Art was another client-led effort, with an assist from advisor Lauren Levin Bender. “I realized early in the renovation process that I would need to buy art to complement Brian and Toby’s architecture,” says Ramza, whose acquisitions included Pae White sculptures and a Josef Albers print. “Every piece I bought has had an emotional impact on me.”

Another must-have for the couple was the sheepskin-covered stools basking in the sun near the living room’s south-facing windows. A decade ago Messana O’Rorke used the sheep—designed by Hanns-Peter Krafft—in a knockout Upper West Side apartment. Since then other clients, scrolling through project photos on the firm’s website, have fallen for the creatures.

Although Messana O’Rorke certainly never intended to spawn a flock of sheep, scattered throughout New York apartments, Ramza felt that the Krafft designs would harmonize with his walnut paneling and other “organic” touches. Besides, there’s a precedent for the wooly mammals in this particular part of Manhattan: A century ago, real ones used to graze on Central Park’s historic Sheep Meadow, just steps from Ramza’s new home.