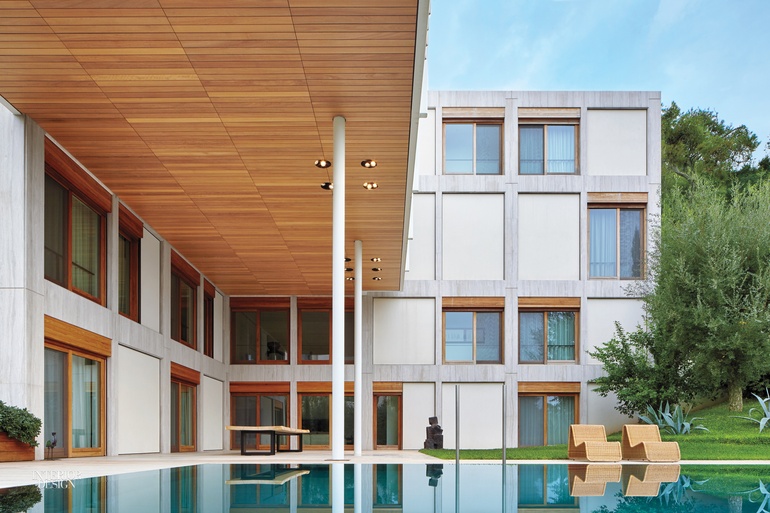 Last year, Ali Tayar completed a house on a mountainside on the edge of Beirut. His clients, a couple with three children, two of them young adults, had been living in an apartment crowded not just with family members, but also with a large collection of furniture and art, much of it French and Italian mid-century. Those pieces included a silver-bronze light fixture by Hervé van der Straeten, a Paul Frankl console, a Le Corbusier chaise, and a pair of geometric lounge chairs by Tito Agnoli. He visited the clients’ apartment, photographed each item, and began imagining rooms for them in the new house. For Tayar, who passed away in March, that didn’t mean just accommodating their dimensions—it also meant designing details that would echo their materials and style.

“Ali’s design process was completely different from that of any other architect I know of,” says his longtime associate, Alejandro Cabrera. “Most architects start at a really big scale and then fill in the details,” Cabrera explains. “Ali was the opposite—he would start with a detail,” sketching in his Hermès notebooks, until he was satisfied that he had gotten it just right. Then he’d go on to the next detail. And the next. To Tayar, who thought additively, a building was the sum of perfectly realized parts.

His clients wanted a very large house, some 9,000 square feet. But Tayar took advantage of the site they had bought, which slopes at almost 45 degrees, to avoid making the building appear bulky. He put the main entrance on the uphill side, where visitors would see a modest, two-story facade.

From the back, the house reveals its full height of four stories—and its surprising geometry. Projecting out from the L-shape main volume, which partially encloses the backyard, is the glass-enclosed third-floor living room. In most cases, the windows have beautiful teak mullions; in others, sheets of glass are joined, almost invisibly, with silicon. It’s a kind of yin and yang, the largely opaque balancing the nearly transparent.

By working with—not against—the topography, Tayar avoided significant amounts of earth-moving, a process he knew would have destroyed the very thing that made the site so special. Instead, he used the shape of the house and the contours of the land to create a yard and pool area enclosed enough to feel private, but open enough to offer views of the city and the sea. Part of the yard, below the living room, is sheltered by the warmth of a teak “ceiling.”

Typical for Tayar, the house follows a grid, which is revealed strategically. The columns and beams are spaced 6 meters apart, a pattern traced on the facades in travertine. Wherever the travertine meets stucco—the other main exterior material—Tayar inserted bronze C-channels, less than an inch wide and deep. The channels create shadows, giving the facades rhythm and depth. And those shadows change throughout the day, an effect Tayar studied carefully.

The other exterior elements—doors, windows, canopies, adjustable teak louvers—were designed by Tayar; nothing was off the shelf. In many cases, they were made in Italy, which is fitting. One of his main points of reference was Italian 1930’s architecture, including the villa by Piero Portaluppi at the heart of the 2009 Tilda Swinton film I Am Love. (Tayar started working on the Beirut house in 2010.) Still, it’s hard to place the style of the house. “Ali was always original,” says Cabrera. “He never followed architectural trends; it was important to him that his buildings be timeless.”

Inside, the rooms are “generously sized, but never too big or too grand,” says Joshua McHugh, who photographed the house—and, in fact, shot the majority of the architect’s projects. Naturally, he focused on Tayar’s extraordinary details, including several remarkable stairways. Two are spirals, with continuous, curved rails in powder-coated steel. The main stairway, connecting all four levels, has an astonishing Tayar-esque detail: The first three steps seem to rise out of the travertine floor before giving way to cantilevered flights that almost float. It is another display of contrasts, this between solid and ethereal. The rails are made of teak and bronze, echoing the materials of the clients’ furniture and art.

Dina Kamal, a London-based designer, completed some of the interior details. She took inspiration from Tayar’s geometry, which made finishing the house a labor of love. “It was,” she says, “a continuation of Ali’s ideals.”

> Watch a video retrospective of the architect's work