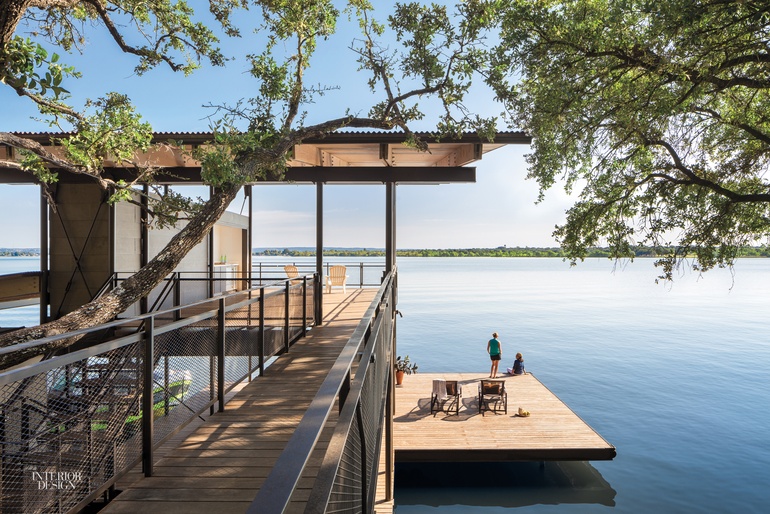 Talk about a perfect-case scenario. The program was clear: an easygoing contemporary vacation home with accompanying boathouse. The site—near Marble Falls, Texas—was spectacular if complicated, with a lake on one side and, on the other, a granite hill dotted with boulders and oak trees. Not to mention the design team was, well, something of a dream team. Architect Ted Flato, a partner of the San Antonio firm Lake Flato, was a longtime friend of the client couple. So was Houston-based designer Hilary Crady of Plus Two Interiors: she’d actually introduced the husband and wife to each other almost 20 years ago. Crady and Flato, an Interior Design Hall of Fame member, were also well acquainted, having collaborated on three previous projects.

Flato proposed a scheme that played up the site’s steep topography with a series of pods stepping up the hill. But the wife, with razor-sharp design instincts honed by her architect father, sent Flato back to the drawing board. “She wasn’t afraid to say, ‘Try again’,” he laughs. His second design was much simpler: a single three-story main building poised midway up the rise, 120 feet uphill from the boathouse at water’s edge. “The main house is nestled between the peak and the lake, both of which weigh equally in this scheme,” Flato explains. “The configuration celebrates the land as well as the water.”

The initial impression is of a tree house nestled among the oaks. The structure is all about movement and connections, with a freeflowing dialogue between indoors and out; only 2,700 of its 4,900 square feet are interior. “There’s more porch than house,” notes architectural project manager Gus Starkey. Even the entry hall (if you can call it that) is a largely al fresco experience: The double-height volume is exposed to the elements, with neither a roof nor a proper floor—just a walkway of concrete pavers set in gravel. There’s a seating area with a boulder for a cocktail table, and, for freshening up post-swim, an open shower backed by a panel of rusted steel.

All circulation—vertical included—is exterior. Anchoring one end of the structure is a grand stair tower enclosed solely in perforated painted steel. Set between the tower and the house proper are covered porches on each level. The topmost one extends out toward the water, forming a cantilevered sky deck. Poised above the tree line, and thus enjoying the best views of the lake, this level houses the living and dining areas plus the kitchen (bedrooms are located on the lower two levels). Swinging doors offer easy access to the exterior, creating an uninterrupted flow of indoor/outdoor space.

Regarding materials, says Flato, “We used what made sense for the location.” This is Texas Hill Country, after all. Reinforced concrete comprises the base. Framing is mostly steel. Durable western red cedar clads the northern facade, which is protected by deep overhangs. The hill-facing southern exposure is sheathed in utilitarian corrugated rusted steel. Douglas fir beams support an angular roof of galvanized aluminum; decks and patios, meanwhile, are cumaru—aka Brazilian teak.

Inside, a cohesive palette creates spatial continuity and instills an informal air. Flooring throughout is oak, as is the cabinetry in the kitchen and adjacent dining area. “She likes every-thing clean and fresh,” says Crady of the client. “So except for the glossy, dark-green powder room, we used one paint color throughout.” The
silvery-white hue—flat-finished on the ceilings and eggshell on the walls—derives from the bark of the surrounding wild persimmon trees.

Furnishings were chosen with practicality in mind. “This is a house meant for wet bathing suits,” says Crady. “And since it’s a weekend home, we couldn’t break the bank.” Accordingly, the living room’s large sectional was “neither expensive nor precious,” but decidedly sturdy, covered with an outdoor textile. There were a few splurges, though, among them the dining room’s integral-colored foam chairs and the accompanying white glass-topped extruded-aluminum table. Other pieces date from the 1950s, including the Tadao Inouye lounges in the entry. “The client loves mid-century modern design, which is what she grew up with,” Crady continues. Mid-century in spirit, if not provenance, are the sky porch’s low-slung lounge chairs, with brass frames intended to tarnish with exposure.

The 2,500-square-foot boathouse is a sort of mini-me of the main structure, a virtual carbon copy in form and materials. Even more engaged with the elements, it’s almost entirely without walls. It stands on partially submerged slim steel legs—“yep, they’re sexy,” says Flato. Here, though, the deck comes down to earth, floating just two feet above the azure stretch of lake.