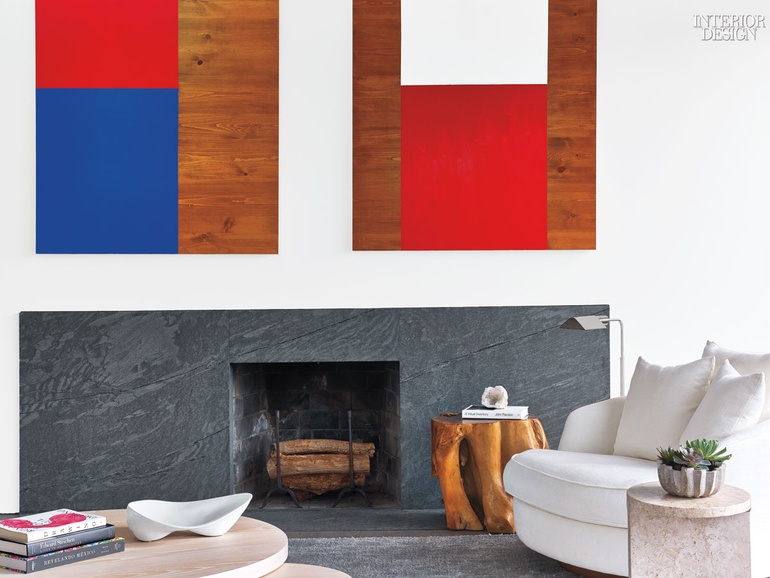 Will Meyer had passed the “for-sale” sign for many weeks before curiosity finally led him down the long driveway to a waterfront house in Springs, New York—the artsy hamlet once home to Jackson Pollock and Willem de Kooning. At 1,930 square feet, it was quaint, especially by East Hamptons standards. But the designer, a principal of Meyer Davis Studio, recognized the angular two-story structure’s modernist pedigree. This was the real deal, not one of the area’s ubiquitous knockoffs, built by Hugh Newell Jacobsen in 1971 for an artist couple. Meyer decided to rescue the three-bedroom home from the fate that befell many such period gems. “The very few authentic modernist beach houses in the area are often torn down and replaced by some big Dutch Colonial,” the designer laments.

That the house had remained untouched for 40-some years proved a double-edged sword. It hadn’t fallen victim to a bad renovation, but it did need a lot of work. Meyer repaired and enlarged the structure, adding roughly 500 more square feet to better accommodate his family of four. “I’m glad I was the one to rehabilitate it, because I understand that era so well,” says Meyer. (Indeed: After college, he spent seven years working for Charles Gwathmey, who made a distinctive mark on the Hamptons in the late 1960s and ’70s.)

The designer’s light-handed approach updated yet honored Jacobsen’s vision. Meyer made few exterior alterations other than replacing tongue-and-groove cedar siding with cedar shingles that match the roof, and eliminating one of the front doors—inexplicably, there were two. A new entry gate crafted from mahogany slats offers approaching visitors a peekaboo glimpse of the house and the Accabonac Harbor beyond. Meyer framed his  add-ons—a new bay window in the rear, a new guest room in front—in white, rendering his interventions easily discernible from the original structure. Jacobsen’s signature white chimney was left intact, of course.

Wherever possible, Meyer strengthened the connection between the house and the verdant 2 ²⁄³-acre property. One of the first tasks was enlisting his contractor to punch an expansive aperture into the living room’s formerly windowless south-facing sidewall. “Pushing open that sawed-off piece of wall was like this big exhale,” Meyer recalls. “It was the view I’d wanted to see since I bought the house.” The room’s pair of sliding-glass doors was replaced with stacking panels that allow the interior to segue seamlessly into the adjacent deck. “With the glass wall opened up, there’s a really incredible flow to the house,” Meyer says.

He reshuffled the layout to improve sight lines and suit the family’s casual lifestyle. The kitchen is now in the front of the house, freeing up space to place a dining room in its stead. Separated by a floor-to-ceiling curtain, the two spaces now overlook a lap pool, surrounded by a sheltered patio with low-slung lounges and raked steps. He also enlarged the look-through between the dining and living spaces, creating an even greater feeling of airiness. The home is now a more inviting place in which to entertain, notes Meyer. “We don’t like going out to restaurants and parties. For us, the Hamptons is more about seeing friends. So we carved out lots of places inside to plop down on and made the outdoor spaces livable.”

Though Meyer liked the home’s arty provenance—and the town’s link to Abstract Expressionism—he had no need for the lofted painting studio that anchored one end of the L-shaped floor plan. So he converted the studio into a bathroom for the ground-floor master suite, and borrowed square footage from the art-storage space above to expand a cramped upstairs bedroom. It’s now a combination sleeping quarters, play space, and reading nook for his 10-year-old daughter, Lily, and 7-year-old son, William.

Respecting the period design didn’t mean making the decor a specimen of ’70s mod. The interior’s limited palette of white and grays conjures a kind of Nordic iciness, creating a muted backdrop for brighter furnishings. For instance, above the fireplace, freshly clad in dark-gray Pietra Cardosa sandstone, sit two boldly colored abstract paintings. They’re by Argentinian artist Enrique Batista, the stepfather of Meyer’s wife, Kerstin. The furniture is highly edited, in keeping with the designer’s penchant for tailored spaces that, he says, are “energized by being pared down.” Many pieces are of mid-century modern vintage, including the living room’s Isamu Noguchi paper ceiling pendant, swiveling Milo Baughman barrel lounge, and pair of Kaare Klint armchairs.

Asked whether he would change anything in retrospect, Meyer demurs. “I could completely redesign it all over again tomorrow if I had to, because that’s what I do. But we turned this house into just what it needed to be, reinventing an artist’s retreat as a family retreat.”