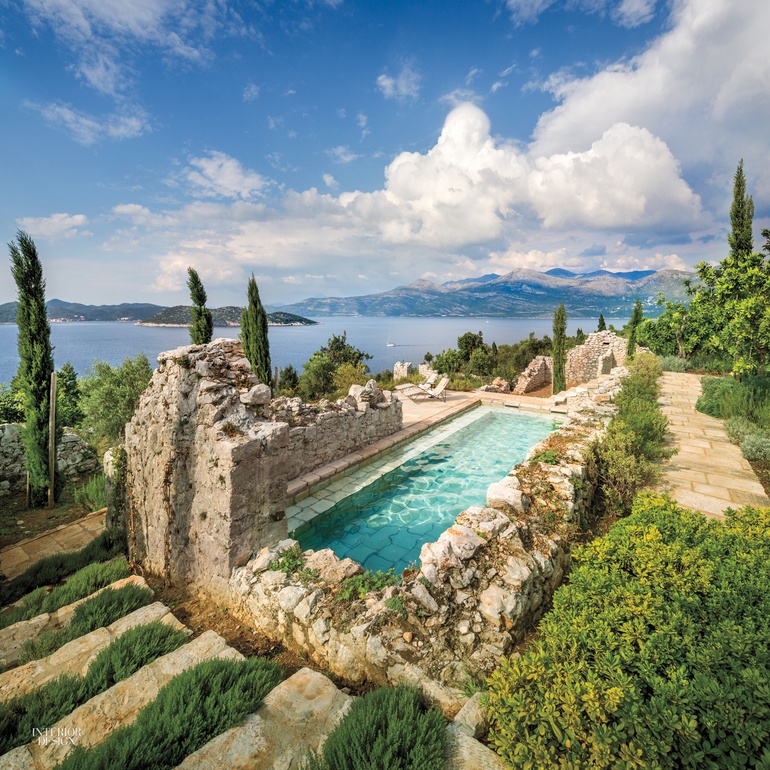 No one can say New York designer Lucien Rees Roberts doesn’t look out for his friends. He and architect Steven Harris—Interior Design Hall of Fame members and partners in life and work—already had their own idyllic island retreat off Croatia’s Dalmatian coast, a ferry ride from Dubrovnik. They’d created it by restoring and expanding a compound of hillside structures dating from the 15th century. Among the guests they frequently hosted there was a certain long-time friend and sometime client: a resident of Cape Town, South Africa, who seemed to love the island as much as they do.

So when Rees Roberts learned the owners of the neighboring property might be interested in selling, he alerted his good friend. And after protracted negotiations—including an agreement to construct a snug cottage in the site’s ancient olive grove for the elderly siblings who’d resided in the house—the place was his.

Not that it looked so promising at the start. The limestone walls of the house—parts of which date to the 1400’s—were structurally sound, but terracotta tiles had fallen off the roof and water had seeped in, rotting the timbers. The rooms were tiny, dark, and damp. And the grounds were surrounded by high walls and so overgrown—vines thickly entwining trees—that there were absolutely no views of the water.

But the client was in excellent hands. Rees Roberts was on the case, and so was David Kelly, who heads the firm’s landscape department. A third collaborator was Chilean-born architect Antonio Zaninovic, who’d worked for Harris and Rees Roberts in the early 2000s (and had introduced his former bosses to Croatia, where he has relatives). Zaninovic now ran his own firm in Cape Town, and had worked with the client before. “We all have a history together,” he says.

At first, everyone thought the client would need a two-story house to capture a glimpse of water. But as the high walls were removed and the underbrush cleared, the elegant shapes of mature carob and olive trees were revealed—and so was a breathtaking view of the Adriatic. Ruins discovered buried under rubble were repurposed as the foundation for a swimming pool, lined with stones salvaged from the Roman emperor Diocletian’s palace in Split, Croatia. Also found on site, an ancient limestone cistern once used in olive oil production became the sink basin in a powder room. “We were functioning almost like archeologists,” says Kelly, “uncovering things as we went along.”

Zaninovic worked with Tomo Djakovic, a local builder well-versed in the area’s historic architecture. Modifications included weather-proofing the walls, adding a new roof (using the same kind of handmade tiles original to the house), converting an oddly placed doorway into a window, and creating another door facing the sea. Interior walls were torn down until there were just two generously proportioned rooms left: a living room and an eat-in kitchen, previously used for storage and for smoking hams. They removed the old smoking oven and built an angular fireplace, modeled on one in Harris and Rees Roberts’s own living room.

Bedrooms are housed in separate structures. A shed tucked in a carob garden was expanded to create the master bedroom. The guest house, which overlooks the sea, was newly built using salvaged limestone ferried from the mainland. Kelly stitched together all the structures with paths and plantings in a soft palette of silver and green.

Throughout the interiors, which tally about 2,200 square feet, Rees Roberts introduced a sophisticated mix of furnishings. When he and Harris had designed their own home, they decorated it for summer, assuming that would be the only season they’d use the place. But the duo soon discovered that spring is a lovely, quiet time to be on the island—though it tends to be rainy. So here Rees Roberts added cozy touches, such as the living room’s Overman swivel chair, upholstered in curly lamb’s wool, and the goatskin throw covering the kitchen’s built-in bench. “In April when it’s raining and there’s a fire going in the fireplace, the kitchen is where everyone hangs out,” says Rees Roberts.

Typically, though, all the homeowners on the hill are in residence in summer. An international group that includes denizens of Venice and Paris who are involved in the fashion and design worlds, they go for walks together and boat to other islands for lunch. Although the pool technically belongs to the man from Cape Town, it has come to be regarded as communal property. The surrounding terrace is the place to be at dusk. The house that started with no view at all now has a prime vantage point for watching the sun set over the water.