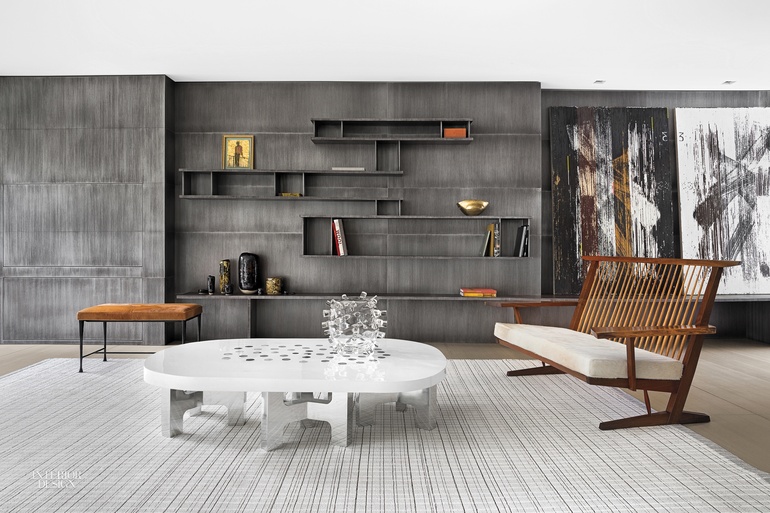 The owner of this triplex, located in the chic Parisian suburb of Neuilly-sur-Seine, professes to have three passions in life: his family (he and his wife have three children); sport (he is a former tennis champion); and racehorses (he owns and breeds them). But one look at his gallerylike home—where iconic pieces by Jean Prouvé, George Nakashima, and Serge Mouille comingle with contemporary creations by India Mahdavi and Christian Liaigre—suggests that modern design must be a close runner-up.

The client owns not only this 6,000-square-foot apartment but also the entire five-story building. For a time, he and his wife debated whether to build an apartment with a roof terrace on the top floor or to live at ground level and enjoy garden access. They eventually opted for the latter. “What really tipped the balance was the possibility of creating a wellness space in the basement,” the husband explains. (Today, the bottom floor is home to a 36-foot pool as well as an eight-seat cinema and a spa, complete with a hammam and treatment room.)

When it came to their choice of architect, the couple displayed rather less indecision. They had long admired the sleek, clean-lined style of Olivier Dwek. The Brussels-based founder of Dwek Architecture + Partners got off to a flying start when he was commissioned at age 28 to design a Louis Vuitton boutique in the Belgian capital; his practice, now well established, tends to attract devout minimalists, discerning collectors, and the fashion set.

The brief was to link the three floors and open up the interior’s succession of small rooms. Dwek’s design achieves both aims right from the get-go: A double-height entry hall offers an uninterrupted view from the front door to the second-floor landing, with glass balustrade. The sight line also extends some 90 feet through the open-plan living/dining area’s full-height glazing to a wall anchoring the far end of the garden. Window frames throughout are ultra-thin—just ¾ inch—to invite the impression of a continuum between indoors and out.

As for furnishings, the client had one very specific request: a table that could accommodate at least 14 for family gatherings—without having to be extended. He set his heart on Belgian designer Ado Chale’s Goutte d’Eau (French for “drop of water”); its cast aluminum top is patterned with radiating ripples that mimic the effect of a pebble dropped in a pond. Dwek happens to share a passion for Chale. “I’ve known Ado since I was a child,” he explains. “My parents bought tables from him in the ’70s, so I grew up surrounded by his creations.”

After an introduction by Dwek, the client asked the octogenarian visionary to produce a special 10-foot version of his 1960’s design. The initial response was no: Chale’s foundry decreed it impossible to cast such a large top in one piece. Another craftsman, however, was willing to take on the challenge, and two months later it was delivered safe and sound. “It’s unique,” declares the owner with unconcealed pride. “The only one in the world!”

That table was the starting point for the decor of the living spaces, says Dwek. “We experimented with various gray-toned materials and with lines that echo the curved pattern of its top.” Flooring throughout the main level is slabs of lightly veined stone extracted from the bottom of a riverbed. Throwing a curve is an India Mahdavi Jelly Pea sofa upholstered in a lush, smoky-hued velvet. Dwek also designed a custom brushed-aluminum shelving unit whose edges were hand-carved, “like an old jewel.” Adding a note of warmth are a George Nakashima credenza and a Mira Nakashima bench, both crafted of walnut, and Christian Liaigre stools with ponyskin seats. A coffee table with mirror-polished aluminum legs, also by Chale, completes the composition.

For the master suite Dwek envisioned a dramatic dressing room–cum–bathroom dominated by wraparound cupboards coated in a specially developed matte-black paint. Aesthetic inspiration for the stone-clad double vanity came from photos he had seen of Giorgio Armani’s Milan apartment. The initial impression is of a minimalist sculpture. “When you walk in, you don’t at first understand you’re even in a bathroom,” notes Dwek.

Real art is also very present. Among other works, the living/dining area is home to a gestural Jean-Michel Basquiat painting, a Jean-Michel Othoniel sculpture (in the form of an oversized necklace), and a pair of abstract canvases by Gregor Hildebrandt that incorporate cassette tape. One of the couple’s most recent acquisitions is a George Condo painting; they also commissioned a piece from the Brooklyn artist Kaws that will soon take pride of place in the garden.

It was Dwek who encouraged his clients to delve into the world of contemporary art, and it would seem they have very firmly caught the bug. “My wife has become an avid collector,” admits the owner. “She now attends international fairs, regularly visits galleries, and travels around the world to see exhibitions.” Chalk it up to another burgeoning passion.