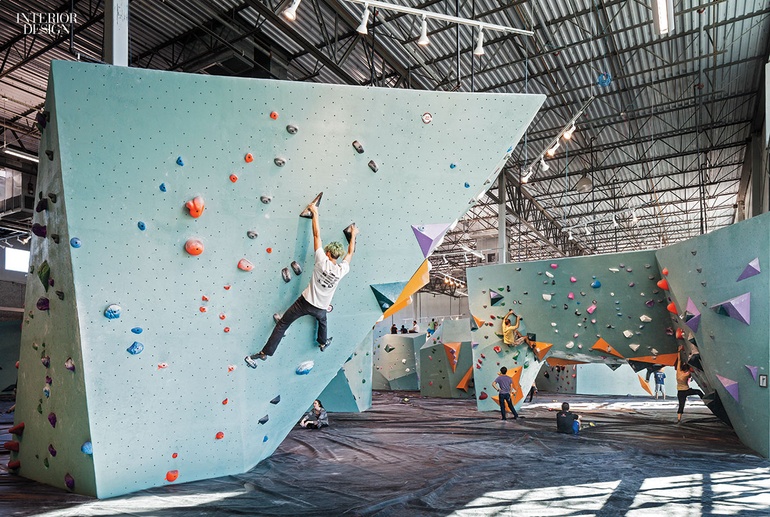 Even before crowds of Texans began wrapping their fingers around the brightly colored climbing holds, the Austin Bouldering Project by Dylan Johnson Associates Architects and Lilianne Steckel Interior Design was a hands-on operation. Putting her own muscle into the project, Steckel painted turquoise numbers on the lockers in her quest to create a “welcoming industrial” look on a budget. Meanwhile, owner Zach Olschwanger and his staff built furniture.

Friendly turquoise and yellow pop throughout the climbing facility, conventional gym, and yoga studio, which all share 50,000 square feet in a building formerly occupied by a produce-processing plant. In the showers, sunflower-yellow ceramic tiles in a herringbone pattern look as if they’re climbing a wall, too. Benches are painted that same color.

On the industrial side, C-channel steel from the plant’s storage racks has been repurposed for a check-in kiosk and the mezzanine lounge’s balustrade and table bases. For a touch of nature, red oak appears in the form of paneling, stadium seating, and the reception desk. And don’t forget about art: a graffiti-inspired mural placing the Austin Bouldering Project on an abstract world map.

“Climbing gyms are known for being grungy,” Olschwanger says. “But I think the design-minded people in Austin really appreciate what we did here.”