At a Boathouse by Rand Elliott, Sports and Arts Go Hand in Hand 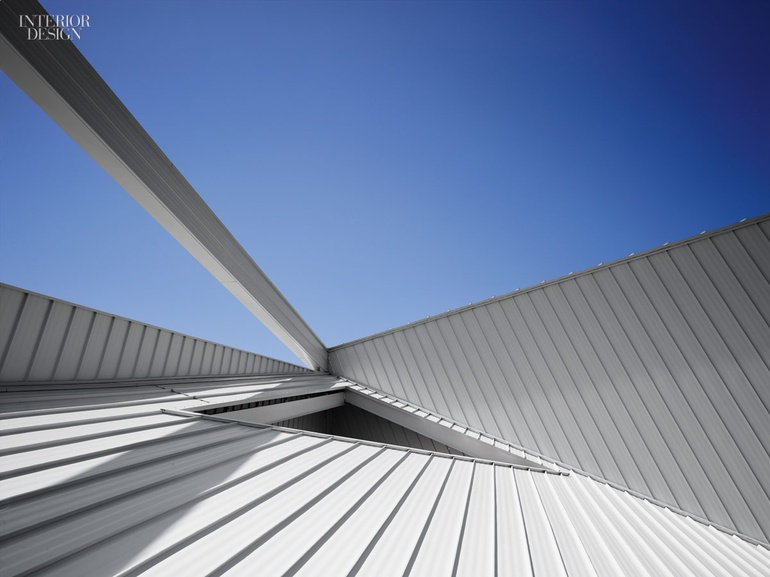 If this stunning white object on the bank of the Oklahoma River resembles public artwork, that’s no coincidence. Anyone familiar with Interior Design Hall of Fame member Rand Elliott knows that art is always part of his intention. This time, his sculptural structure is actually the CHK Central Boathouse, not only a facility for the University of Central Oklahoma women’s crew team but also a cultural amenity, including an art gallery and a theater for the school and the city. “What you need to know,” he begins, “is that this combination is something unique in the world.”

You may be wondering: What do the arts, specifically music, share with rowing? “A sense of rhythm,” he replies with the assurance of someone deeply immersed in the sport of crew. Elliott + Associates Architects, celebrating its 40th anniversary, has in the past 10 years completed a total of five boathouses on this mile-long stretch of river—one so straight that it’s an Olympic Games training site. While all the boathouses are white-painted steel, each has a singular shape.

CHK Central’s overall form is a two-level, 18,000-square-foot triangle with, he explains, “the nose along the river’s edge,” a literal connection to water. The exterior defines no further ordering of “front” or “back” or “side.” All elevations are weighted equally. “This is 360-degree exposure,” he says. Among other things, that meant carefully concealing the mechanicals. Who wants to approach this elegant building, all dressed up for an event, and encounter a battery of condensers and plumbing pipes? Interiors, however, follow a precise procession. The downstairs is split between cultural space for the public and storage for shells, while the upstairs encompasses the training room and offices.

The music emphasis makes itself apparent starting right at reception. Backdropping the desk, nearly 400 stainless-steel wires are strung taut from floor to ceiling—the intended allusion being to piano, guitar, or violin strings, although the cumulative effect is analogous to water. Beyond reception stretches the long, wide gallery, meant as a social space as well as one for rotating exhibitions by students and local artists. One show, “The Architecture of Dance,” featured black-and-white portraits of members of the Oklahoma City Ballet, which occupies a building that Elliott renovated 26 ago. On permanent display, through slot windows that extend down one gallery wall, are the boathouse’s chief raison d’être, the shells on racks in the storeroom.

At the far end of the gallery, guests enter the theater, with its soaring glass walls, and experience another aqueous moment, a floor that might be mistaken for the surface of a lake. “It’s no accident,” Elliott says, laughing. “We made it happen with concrete so highly polished that it looks like you’re standing in water.” Here’s where senior project architect Mike Mays, an accomplished musician, takes over. “The building’s shape also helps with the theater component,” Mays explains. “Usually, theaters have four walls. We have three, none of them parallel, which makes for spectacular musical performances.” Other acoustical aids include panels floating below the 30-foot ceiling and accordion-folded sections of wall.

Outdoor performances can take place in the shelter of a V-shape indentation created by adding an otherwise unnecessary wall to the opposite end of the building. The huge triangular aperture at the top of this wall serves a primarily aesthetic function. Elliott carefully calculated the position of the opening to frame a view of downtown’s glass towers, 2 miles away.

Outside and in, golden accents gleam. Windows on two facades are glass laminated with gold-colored film, so a glow filters into the theater and its green room, boat storage, and a long corridor. Most dramatic is the lighting treatment saved for the “nose” created by the theater’s two window walls. Seen from the river, golden yellow LEDs running horizontally across the glass planes form chevrons. Could there be a better spur for the rowers, with their gold-and-blue jerseys, to go for the gold?

Sports and the arts clearly go hand in hand. But what about commerce? That became yet another element of the program when a benefactor requested an on-site ATM. Elliott and Mays obliged, designing an angular kiosk in the same white-painted steel, a miniature version of the boathouse. If you consider the kiosk a separate project, it ups Elliott’s riverside count to a half dozen—until he gets the official go-ahead to dip his oars in the water again.