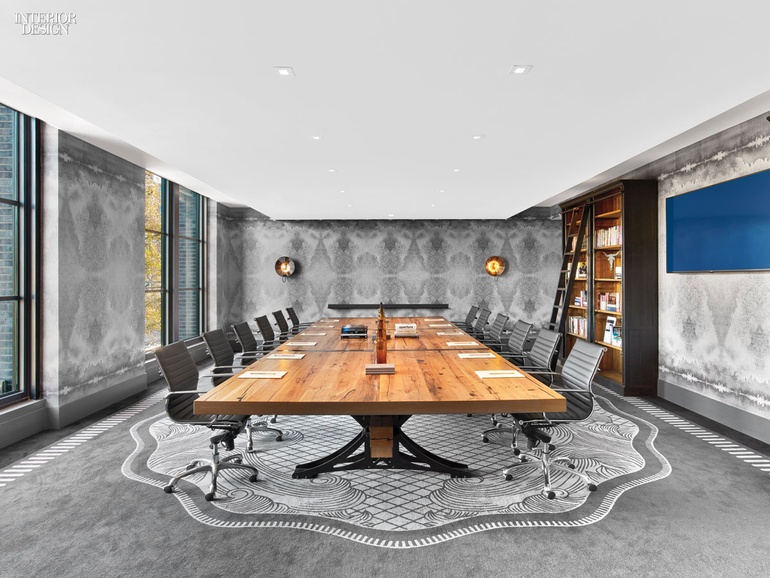 The soulful folk rock of the late Townes Van Zandt has been an inspiration to Bob Dylan, Neil Young, Norah Jones, Garth Brooks, and scores of other musicians in Van Zandt’s native Texas and beyond. His reach has now extended to design—in the form of the Hotel Van Zandt on the shores of Austin’s Lady Bird Lake.

As the self-proclaimed Live Music Capital of the World, the booming intersection of hipsters and honky-tonks, techies and tequila, Austin had obvious attractions for the Kimpton Hotel & Restaurant Group, a company that prides itself on letting local ethos drive a design. “Culturally, the city is a great fit for Kimpton, which is also wildly independent with an eclectic mix of our own,” creative director Ave Bradley says. The firm chosen to deliver the goods, transforming the interior of a new 16-story gray brick tower, was Markzeff, which had previously worked with Kimpton on restaurant projects but had never tackled a commission in the Lone Star State.

Born in South Africa and based in New York, Mark Zeff sampled barbecue, bought cowboy boots, a classic pair of Luccheses, and listened to music in some of the city’s 200 venues, offering everything from Western swing to alt rock, as part of his reconnaissance. “Van Zandt’s music is very poetic,” Zeff says. “It speaks of freedom.” That’s certainly something that runs in the family. An ancestor, Isaac Van Zandt, was a founding father of the short-lived Republic of Texas, and Van Zandt County, near Dallas, is also called the Free State of Van Zandt because of a rebellious streak in the citizens, who have twice attempted to secede from the rest of Texas.

Zeff looked to the Austin music scene to lay down the baseline for the hotel. His homage plays out in the lobby lounge with an installation of exuberant birds, made from vinyl records, that flutter out of an old phonograph and, elsewhere, as curated collections of found objects such as vintage radios and microphones. The gig posters in the 319 guest rooms reflect the Austin club scene in the ’60’s and ’70’s, when Van Zandt made his name. His final album, No Deeper Blue, symbolically thrums through the color palette as a moody teal. Riffs on blue are found everywhere  from the lounge’s tufted velvet-covered sofas and chairs to the guest rooms, where the wall covering evokes dreamy watercolor brushstrokes.

But this isn’t, um, one-note design. “It’s elegant cowboy with a sense of humor,” plucking the Western string gently, Zeff explains. That’s manifest in the reception area’s swath of floor tile in wax-treated leather—like a picnic blanket for a cattle baron. Barnwood clads the walls of meeting rooms, and tooled leather upholsters chairs in various locations. It’s even possible, in a way, to see the ballroom’s wall covering, a mesmerizing pattern of inky Rorschach splotches, as the skin of a huge mutant rattlesnake.

The rakish streak in the design suits the city motto, Keep Austin Weird, as well as Kimpton’s MO. “We like to have fun with our hotels, and we’re always looking to do that in a smart and disciplined way,” Bradley says. As an antidote to the cliché of the walnut-paneled library, Zeff styled an events space as a library but gave it high-gloss peacock-blue walls and alcove shelving lined with red-covered books, all about Texas or by Texas authors. “We freaked out the faux library,” he says with satisfaction.

This bit of nose-thumbing fits well in the neighborhood, the Rainey Street Historic District, a pocket of bars and restaurants in stripped-down bungalows. On early visits, Zeff noticed a wild guinea fowl, affectionately known to locals as Geraldine, roaming the streets. The hotel restaurant is now called Geraldine’s, complete with a guinea fowl for a logo. Other characters are represented in artwork by Van Zandt’s son JT, who creates his images by boring holes in slabs of wood. There are two portraits of Van Zandt, senior; one of a  stern-looking Comanche chief; and another of a 19th-century boy with a cigarette dangling from his mouth.

A photograph of Van Zandt’s friend Willie Nelson hangs just outside the restaurant. Inside, the arched ceiling joists strung with marquee-esque lights suggest the magical setting of a Texas dance hall, and live music is played every night. It’s not hard to imagine Van Zandt himself onstage.