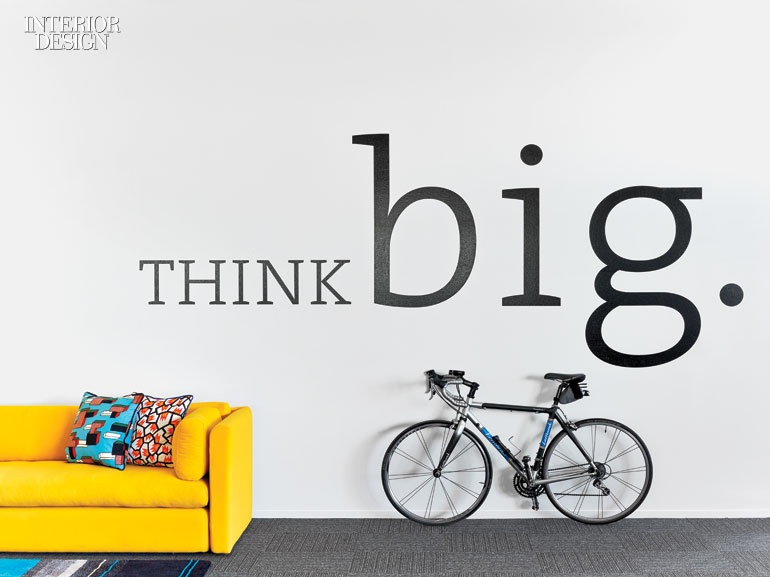 You’d think that EDG Interior Architecture + Design, being ranked on Interior Design’s list of Giants firms specializing in hospitality, would have a studio that’s, well, hospitable. Given the mantra Think Big, there’d be plenty of space, you’d think, too. In reality, EDG was wedged into a small 1960’s bank in San Rafael, across the bay from San Francisco. The firm needed to spread its wings.

Initial credit for finding the current location goes to EDG partner and vice president of development Patrick O’Hare. “The day we started looking for a new home, I took a tour of Marin County commercial spaces,” he recalls. “Our main criterion was pretty straightforward—break away from the expected.” O’Hare had last been to the decommissioned Hamilton Air Force Base in Novato in the 1970’s, before the city took over ownership of the site. Now it’s been redeveloped as a creative campus called Hamilton Landing, and he was particularly taken by one converted 1930’s hangar’s sheer raw space, not to mention the views from the attached air-traffic control tower.

“I couldn’t get my two partners up here fast enough,” he says. One of them, though, had other thoughts. President and CEO Jennifer Johanson, also his wife, admits that she was reluctant to move farther from San Francisco: “He had to talk me into going to see it.”

Eventually, the couple and partner David Barth saw eye to eye. A key factor was that almost nothing had to be done in terms of structural intervention. The 30-foot ceiling, its exposed steel trusses and framework—they were right there. With the wide-open 17,000-square-foot expanse, half the hangar’s top level, EDG could also show off another favorite catchphrase, Space: The Final Frontier. Johanson and O’Hare could concentrate on planning both to meet internal needs, making the environment more open and collaborative, and to create a built-in marketing tool, narrating the firm’s story to clients--existing or potential--and vendors alike.

Visitors enter via a reception area where the desk is an impressive construction of oak planks. Surrounding it, furniture arrangements can be changed based on need. Move chairs in front of the flat-screen monitor to review projects with clients. Slide a stool or a bench near a sofa for the Monday morning all-hands meeting. (One seat, however, never moves. That’s Patricia Urquiola’s mesh egg shape hanging from the ceiling.)

Beyond reception, a conference room occupies a level of the former air-traffic control tower. As such, it’s surrounded on three sides by full-height windows with views of San Francisco Bay. The space can furthermore be used as a mini showroom, where vendors can set up vignettes and designers can test-drive solutions.

As for the studio proper, it’s primarily open with just a few perimeter offices. Strolling between the two groupings of workstations, staff members can stop by the materials library or kick back in the lounge, blowing off steam at the Ping-Pong table. “We aspire to capture the soul of the Eames studio,” Johanson says, adding, “We love immersing the entire team. We love to do charettes.”

A primary order of renovation business was therefore “project rooms” for meetings. These three plywood boxes form a row delineating one side of a central circulation route that doubles as a gallery for staff to present to colleagues or to outsiders. One of the gallery’s collaborative worktables, lit by an enormous pendant dome, is dedicated to reps showing their wares.

Alongside the gallery, the exteriors of the meeting rooms are covered with linoleum to function as pinup surfaces. “It’s our own Pinterest,” Johanson says. After the final room, the smallest, turn the corner to find a niche carved out of the end. The niche contains a banquette and, above it, framed collages by the late Eric Engstrom, who founded EDG as the Engstrom Design Group.

Perhaps the most communal space is the kitchen. “It all happens here,” Johanson says of the full-fledged chef’s facility, complete with not only two refrigerators but also a range and an oven. That’s because, besides specializing in hospitality spaces, EDG develops food and beverage programs for Wolfgang Puck and Gordon Ramsey restaurants and Four Seasons Hotels.