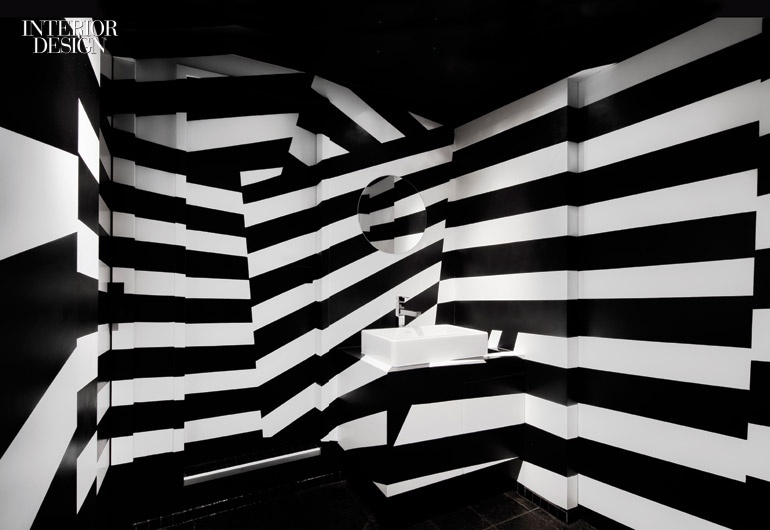 As longtime bartenders at a Berlin institution, the Green Door, Torsten Bender and Sebastian Mathow knew that several of its hippest competitors had been designed by the same small firm, Hidden Fortress. So when Bender and Mathow decided to open their own place, they immediately asked the firm’s three partners, Jan Maley, Björn Meier, and Ingo Strobel, to help. The partners, in turn, enlisted frequent collaborator CollignonArchitektur.

“We requested a bar without an obvious concept,” Bender says. “People should come in, order a drink, and only then start noticing unusual details.” And there are plenty at Bar Zentral, especially considering that it consists of just 390 square feet tucked under a brick arch of the S-Bahn rail viaduct.

One of those unusual details pertains to the bar proper. “Generally, a bartender mixes his drinks below the guest’s eye level,” Strobel explains. “But we raised the floor, so people can watch.”

Meanwhile, the back bar, typically a glowing parade of what Meier dismisses as “vanity bottles,” is instead a cabinet fronted by sliding doors except where open compartments display an old turntable and vinyl records. It was essential that the wall behind would be reachable when the transportation authority arrives to inspect the brick every three years, so movable brass disks were strategically installed along the back of the cabinet for improved access. Elsewhere, the wall is surfaced with a temporary mural of palm trees.

When it came to walls in the restroom, concealed behind plain black curtains, Hidden Fortress started by using razzle-dazzle British navy camouflage, composed of intersecting black and white stripes, to distort perceptions of the unisex wash area. “If you still feel sober after one drink at the bar, you open the curtains and feel immediately disoriented,” Strobel says. “The sink just seems to float.” In the four rooms where the toilets and urinal are, tile murals that appear abstract reveal themselves, at a distance, to be faces of characters from Blade Runner.

Speaking of movies, the firm’s process is similar to that of director George Lucas. His first Star Wars was heavily influenced by a 1958 Akira Kurosawa film called The Hidden Fortress.