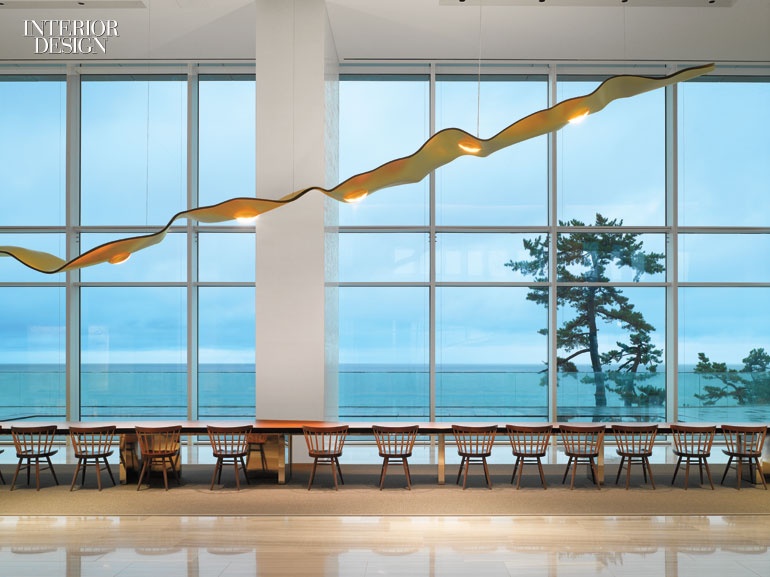 As a Pritzker Architecture Prize winner, not to mention an Interior Design Hall of Fame member, in the business for 50-plus years, Richard Meier might be hard-pressed to come up with things he’s never done before, professionally speaking. But the completion of the Hotel Seamarq marks a trio of them: first project in South Korea, first ground-up hotel, and first large-scale commission to encompass architecture and interiors. Other things, meanwhile, were familiar. “The interiors relate to some of my early houses in the U.S. in terms of openness and transparency,” Meier says. “Many of the cues for the hotel’s design came from the site—its light, its topography.” Set on a hillside in Gangneung, a city directly across the Korean peninsula from Seoul, the 15-acre site faces the East Sea, also known as the Sea of Japan, in one direction and a panorama of mountains and a lake in the other.

The Seamarq is owned by a Hyundai Heavy Industries, which, despite its name, owns seven hotels. With the 2018 Olympic Winter Games taking place an hour’s drive from Gangneung, Hyundai razed an existing small hotel, built in the 1980’s, to make way for the Seamarq. It’s envisioned as a draw for international sports enthusiasts, retreat-seeking Koreans, and corporate conferences. Meier was commissioned to construct the hotel’s main building, a banquet hall, and an amphitheater, all strikingly contemporary.

“We made every effort to preserve the landscape while giving almost every room a sea or lake view,” Richard Meier & Partners Architects associate partner Dukho Yeon says. Ergo the main building’s distinctive form. Above a glass-wrapped base, a tower, roughly a parallelogram in plan, rises to contain the guest accommodations. Equally noteworthy is the tower’s construction. The crisp facade is primarily self-cleaning concrete panels, immense at 7 by 13 feet, with a porcelain-white finish. Meier’s trademark powder-coated aluminum panels form balconies, canopies, louvers, and fins.

The base, totaling four stories, organizes the public and amenity spaces. In the double-height lobby, connection to the outdoors is immediately apparent. What’s not is the reception area, tucked away at one end. “We kept the space as open as possible,” Yeon explains. That way, almost nothing interrupts the luminous taupe marble floor or the window wall and the sea view beyond. Taking full advantage is a long table lined with George Nakashima chairs on one side, facing out of course. An enormous yet graceful lighting sculpture by Ingo Maurer swoops overhead like an abstracted golden albatross. Around the corner, anchored by a fireplace, a lounge boasts an assortment of mid-century furniture—Ludwig Mies van der Rohe, Franco Albini, and Eero Saarinen are all represented—while sofas by Philippe Starck add a contemporary edge. Looming above the flames, a wall of black granite is punctuated by an orderly grid of holes to let LEDs shine through.

Curves enter the picture with the main staircase, a swirl of snow-white Venetian plaster. The stair descends to the restaurant level’s entry gallery, with its floor-to-ceiling wine rack and granite reception desk. Another level down, in the entry corridor for the spa, vertical slats hug the sidewalls. “The slats mimic traditional Korean screens,” Yeon says, adding, “Spas are very much a part of Korean culture.” This one offers indoor and outdoor hot tubs and whirlpool tubs for both men and women. Full swimming pools, similarly of the indoor and outdoor sorts, can be found up on the roof of the building base, where the deck also serves as a venue for social events.

From here, the tower rises 11 stories. Yeon describes its 149 guest rooms and suites as “spacious, open, airy.” Even the standard versions are 500 square feet with 10-foot ceilings, full-height windows, and balconies. He and Meier devised two palettes, “ocean” and “mountain.” They differ primarily in terms of wood—maple for the former, ash and oak for the latter—and fabric in cooler versus warmer neutral tones. The presidential suite is another story. At 5,000 square feet, it occupies the entire top level and comes complete with three roof terraces, two bedrooms, a kitchen, a dining area, and a living area with a fireplace in bronzed stainless steel. Olympic bronze, silver, or gold not included.