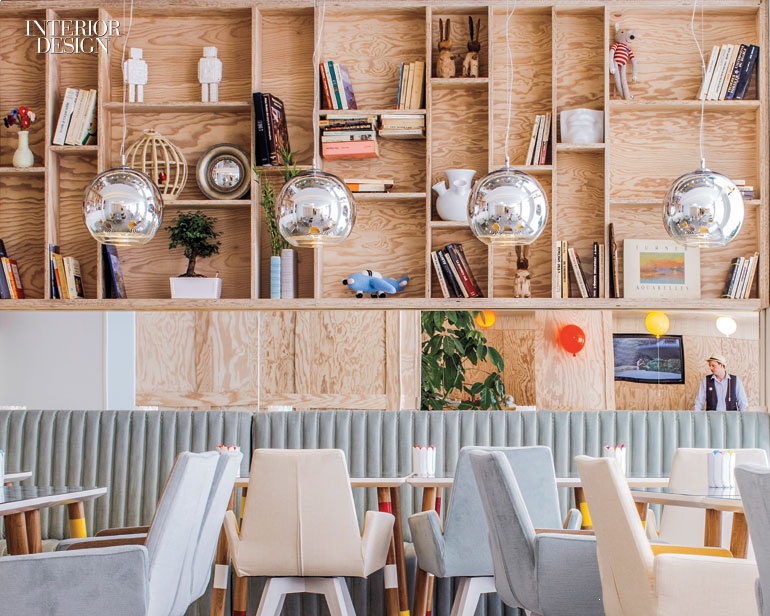 Cross the street from Paris’s famously naughty Moulin Rouge, walk past the sex shops and strip clubs of the Pigalle red-light district, then take Rue Blanche down the hill to number 69. It’s the one with the facade framing small glass cases that contain cute stuffed animals and a toy robot, partly illuminated by balloon-shape lamps that glow behind the curtained windows. Amid the neon and sleaze, this childlike wholesomeness feels like a jolt—or a joke. And the Hôtel Joke is, in fact, having the last laugh. Bursting with candy colors, nostalgic school references, optical illusions, and interactive toys, Maidenberg Architecture’s 15th project for the Astotel group offers tourists the chance to relive the French childhood they never had.

Silliness erupts from the moment you check in. A flat-screen behind the reception desk shows an endless loop of video clips depicting hilarious everyday accidents and people being fooled to comedic effect. The hotel’s own gags start almost immediately thereafter. The 2 euros on the lobby’s floor? Good luck picking the coin up: It’s embedded in one of the tiles, porcelain tinted to resemble wood and concrete triangles arranged in a pinwheel pattern. And do you notice something strange about that bookcase in the breakfast room opposite? Some of the books cling to the underside of the shelves, seeming to defy gravity. Up in your room, one of 44, be careful sitting on that tree stump. Made of a cushiony material, the stool squishes underneath you, possibly sending you tumbling over. Indeed, few things are as they seem at the Hôtel Joke. The vaguely checkerboard pattern of the carpet turns out, on closer inspection, to be composed of Eiffel Towers placed tip to tip. The grass on the balconies? Fake.

When designing or choosing furnishings, Philippe Maidenberg didn’t do external research, per se—no trips to toy stores, no revisited family photo albums, no playlists packed with “Frère Jacques.” Rather, he recounts, pointing to his own head with a grin, “Everything came from here.” Desks in the guest rooms have glass tops beneath which he placed either oversize puzzle pieces or a maze for marbles. The game of darts, meanwhile, provided the bull’s-eye motif that adorns many surfaces. It’s most visible on the tops of the breakfast tables—their thin, sharp legs, furthermore, recall pickup sticks.

Above the breakfast tables, shiny pendant globes reflect the scene, like fun-house mirrors. The chandelier in reception is an installation of red cable and bare light bulbs spelling out the word joke. The bulbs illuminate expanses of plywood paneling meant to evoke packing crates and associated ideas of travel.

Parked nearby, a miniature electric car awaits kids who want to go for a spin. For guests of all sizes, keen to play with toys and games, the hotel is fully interactive. Stuffed animals, toy robots, and a set of Connect Four beckon—on the ground level alone. In the guest rooms, the marquee attraction is the headboards. Some are covered in jumbo poetry magnets, allowing guests to spell out verses and sentences as the mood strikes. Others feature a game-show wheel divided by words and phrases in addition to numbers. After a spin, the pointer might end up on anything from “Read a Good Book” to “Breakfast in Bed” to “Champagne.” Guests occasionally get deeply caught up in the outcome, Maidenberg reports with a chuckle: “People are just big kids sometimes. So much the better.”