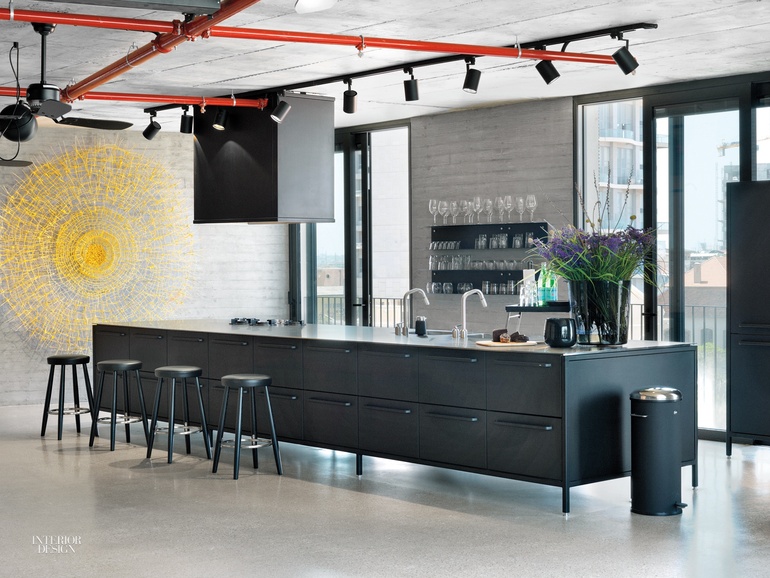 If mid-century minimalism had a West Coast godfather, it was Pierre Koenig, who built two Case Study houses and lectured at the University of Southern California. “He changed my life, showing me how the modern style works,” his 1980’s student Uri Michael Palan recalls. Now practicing as UriMichaelPalan, he carries the torch for clean-lined modernism in Tel Aviv, and his design for this apartment draws on Koenig’s DNA.

The apartment belongs to newly minted real-estate developer Oren Yonayov, a former media entrepreneur with advertising experience. He and his partners hired Bar Orian Architects to design the six-story building, keeping two adjacent units for his own family. Palan then broke down the wall between to create an efficient 2,000-square-foot plan. “Koenig didn’t waste time or space on corridors,” Palan notes.

Yonayov essentially served as the creative director. “I can tell you that 50 per­cent of the result is due to his excellent taste,” Palan says.

One major feature is the Danish kitchen system. Its modules in stainless steel powder-coated black were assembled to form a tall cabinet and a long island—so long, in fact, that its stainless-steel counter had to be craned in via a balcony. The finished island integrates two sinks as well as gas burners set directly into the stainless.

A tabletop that retracts, at the touch of an iPad, into the rough concrete wall at one end of the island is likewise black. On the same wall, virtually the only bright color appears. It’s the yellow of a wire sculpture—think a giant abstracted dandelion.

Tones return to gray in the bathrooms. The master suite’s is an open-fronted box completely clad in varying sizes of marble tile. It continues in the children’s bathroom though not to quite the same extent: The front wall here is actually a set of frosted-glass sliders.

Also gray is the apartment’s exposed concrete ceiling. To keep it neat, Palan hid mechanicals underfoot instead. On top of the floor slab, he poured sand in which he hid conduit before topping everything with polished concrete. So what are those ceiling pipes painted red, as if to feed fire sprinklers? Though some pipes serve as raceways for electrical wire, most are purely decorative. That’s Koenig with a smile.