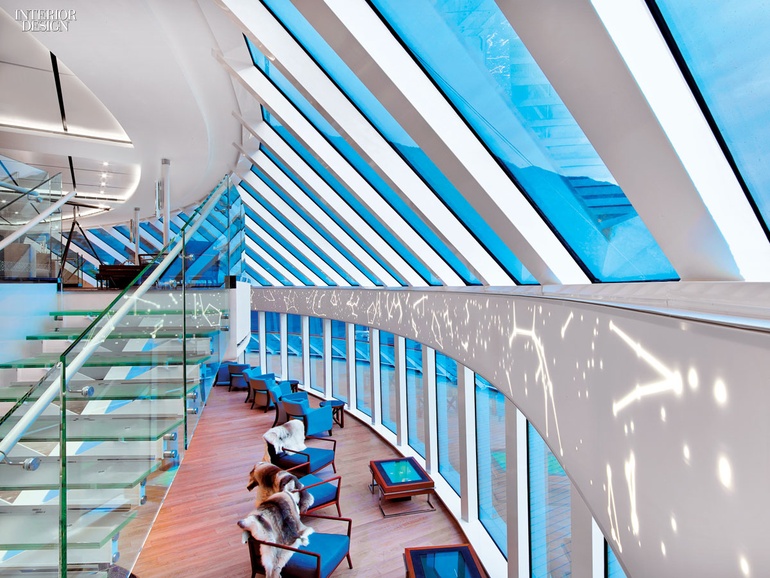 Ocean liners are floating hotels. Interior Design Hall of Fame member Lauren Rottet knows all about hotels on solid ground. Ships, however, were quite another story, given their steel-only construction, weight limits, balance requirements, strict fire regulations, and high ratio of public to private spaces, just for starters. Designing the Viking Star also meant creating a brand, as the ship represents Viking Cruises’s big move from rivers to oceans. Because the Viking Star is considerably larger than the river-going ships that gave principal Richard Riveire his introduction to Viking, he teamed up with nautical expert SMC Design to complete the 465 staterooms and the 105,000 square feet of public space.

The three-level main salon is “based on an old Viking ship—with wood finishes, ribs on the ceiling, and window screens in macrame, like rigging,” he explains. Another “living room,” as he terms it, is the Explorers’ Lounge, where entry is via a walnut-veneered tunnel twinkling with inset light fixtures configured as constellations. Midship, the charming Wintergarden tearoom features a bentwood canopy, conceived as the stylized trees of a forest from Norse mythology, and two perching raven figures, said to be Huginn and Muninn, the god Odin’s eyes on the world.