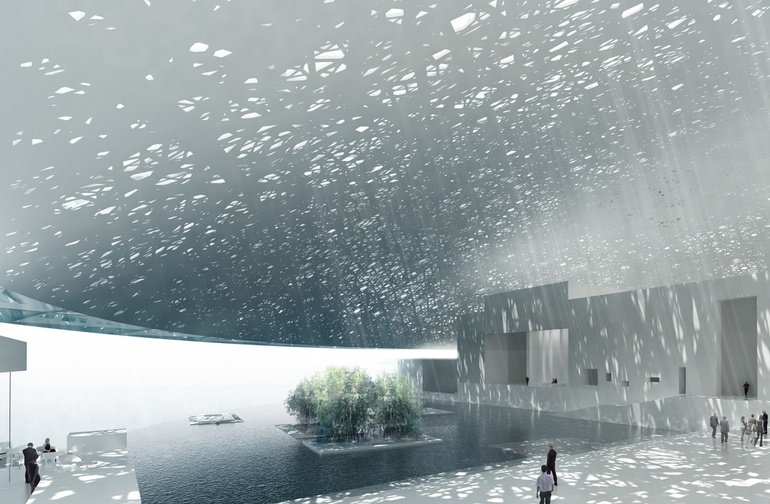 Most of us have heard tell of the Apple Campus 2 in Cupertino, California, which is steadily rising from the ground like a giant metal doughnut. But there are plenty of significant new builds to look out for in 2016, with top architects engaged in projects across the globe. Notably, a spate of cultural institutions are set to complete in the coming year, including two new additions to Abu Dhabi’s Saadiyat Island Cultural District and OMA’s Performing Arts Center in Taipei. London’s Design Museum will move into the converted Commonwealth Institute building later this year and SFMOMA’s Snøhetta-designed extension is also almost finished.

Beyond museums, you'll also want to keep an eye on Santiago Calatrava’s much-delayed transportation hub at the World Trade Center in New York. A couple of additions to the top ten tallest buildings in the world are also likely to complete in 2016, including the Lotte Tower in Seoul, South Korea and the Ping An Financial Center in Shenzhen, China. Keep reading for an overview of some of the key projects due to launch over the next 12 months.

Standout: Louvre Abu Dhabi is a satellite of the renowned Paris museum set to open this year on the city’s Saadiyat Island. Designed by the office of French architect Jean Nouvel, it features a domed roof inspired by interlaced palm leaves. The dome’s surface will allow light to filter through to an interior that references the shaded passages of a typical Arabian souk. The museum is one of three buildings designed for the island by Pritzker Prize-winning architects, alongside Frank Gehry’s Guggenheim Abu Dhabi and the Zayed National Museum by Foster + Partners, which is also scheduled to complete in 2016.

Standout: London designer Thomas Heatherwick is transforming a disused grain silo in the South African city of Cape Town into a museum to house an important collection of African art. Heatherwick Studio is slicing through 42 vertical concrete tubes that originally stored grain to create a void housing galleries and a central circulation space. The tops of the five-metre-diameter tubes are covered with glass to allow light to reach the levels below. Pillowed windows will be inserted into existing openings on the upper stories, transforming the building into a glowing beacon at night that will attract visitors to the regenerated Victoria and Albert Waterfront.

Standout: The Taipei Performing Arts Center will provide a high-profile addition to the Taiwanese capital’s cultural scene. Rem Koolhaas’ studio OMA is responsible for the design of the building, which incorporates three autonomous theatres that will share front-of-house and backstage support areas housed in a central cube. Performance spaces including the spherical Proscenium Playhouse each intersect with the cube and are individually identifiable from outside. Raising the main structure above the street will encourage visitors to enter the building, where they will be able to witness activities taking place within the production areas.

Standout: One of the most eagerly anticipated additions to Manhattan’s skyline in recent years, this development at West 57th Street is a 450-foot tower with one corner reaching skywards to form a pointy pinnacle. Described by Copenhagen architecture firm BIG as “a hybrid between the European perimeter block and a traditional Manhattan high-rise”, the building’s rectangular plan encloses a central courtyard that will be visible from the street. The sloping roof will incorporate south-facing terraces and is intended to create a feeling of transition between the low-rise buildings to the south and the residential towers flanking its north and west edges.

Standout: Occupying the last available plot on the National Mall in Washington, DC, the National Museum of African American History and Culture is set to bolster the city’s panoply of cultural institutions. It will accommodate exhibition spaces, offices, a theatre and storage for the NMAAHC’s collections. The design by London architect David Adjaye is based on the shape of a crown and is clad in ornamental bronze lattice panels that reference African American craftsmanship. Visitors entering from the Mall will pass under a large porch that extends towards the landscape. Over half of the building is below ground, where contemplative spaces will be illuminated by an oculus.

Standout: Sixteen years on from the completion of its conversion of the Bankside Power Station into the Tate Modern art gallery, Swiss studio Herzog & de Meuron’s new extension is set to open this year on London’s Southbank. The building located to the south of the existing gallery will double Tate Modern’s exhibition spaces, as well as providing new learning and social areas. Faceted brick facades interrupted by horizontal apertures reference the materiality of the original power station. The brickwork also incorporates perforated sections that allow light to filter in during the day and create glowing bands when illuminated from within at night.