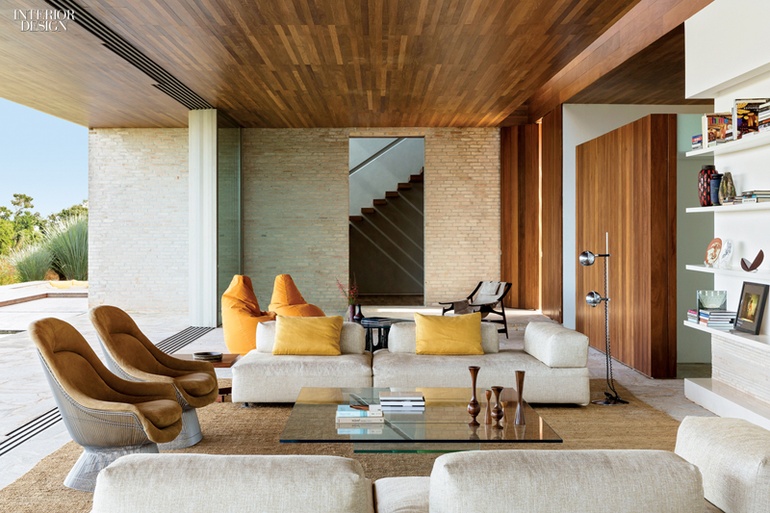 Not the least bit formal, even at 10,600 square feet, this vacation house by Interior Design Hall of Fame member Arthur Casas is imbued with ease and openness, warmth and elegance. But attaining those qualities required careful planning. That’s partially because the site—just under an acre in a hill town above São Paulo—presented several dichotomies.

The north-facing street side had the sunlight. Meanwhile, the rear, overlooking a golf course and woods to the south, was relatively dim. Arranging the plan on an east-west axis therefore allowed for both light and carefully framed views. Casas then configured that long volume in two sections.

One contains the public space, where glass sliders stack away to blur the inside-outside boundary, and the floor’s rough granite and the ceiling’s cumaru wood extend to become the pavers and canopy of a terrace. It’s wrapped on two sides by a man-made pond, part of it deeper for swimming. At the opposite end of the ground level, four bedrooms accommodate guests including the owners’ grown daughters. A floating staircase ascends to the master suite.

Furnishings are largely American modern classics by Warren Platner, Richard Schultz, and the like. But the Italians also put in an appearance with the living area’s orange beanbag chairs by Piero Gatti, Cesare Paolini, and Franco Teodoro and the pool’s ample chaises by Francesco Rota.