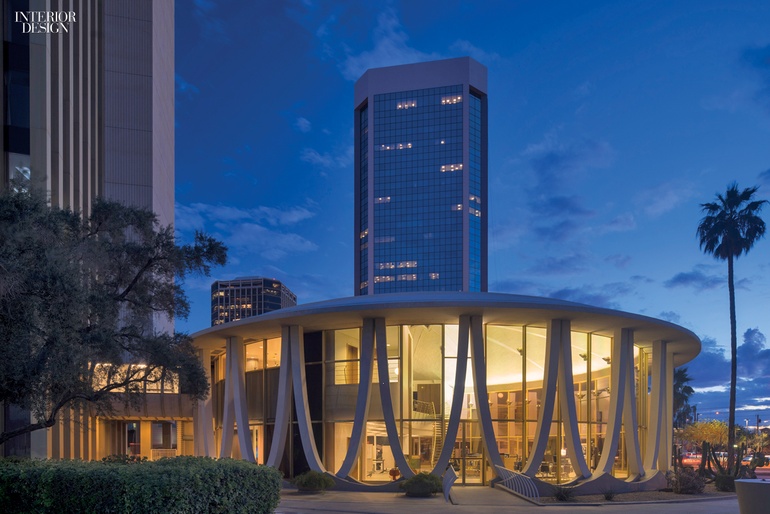 Victorian superstar H.H. Richardson established his architecture practice in Brookline, Massachusetts, in 1874. Across the U.S., in the desert, Oscar Niemeyer’s Peruvian acolyte Wenceslao Sarmiento built the glassy drum-shape pavilions of the Phoenix Financial Center in the mid-20th century. Though their modernist style could not be further removed from Richardson Romanesque, the contrast was exciting to Joe Herzog, principal at Richardson’s successor firm—which is why he took a 10-year lease on one of the two pavilions and adapted it for a Sun Belt satellite. “I came to work here,” he says, “because of the lack of limitation and the willingness to experiment.”

To prepare the 9,000-square-foot pavilion for its new life, Herzog gutted accretions such as partitions to allow desks to stand free in an open plan. The 22-foot-high curtain wall, with its gold-anodized aluminum framing; an arched glazed tunnel; and the blue leaded glass set into a starburst at the apex of the rotunda’s dome are original. Ditto for the pendant globes, long stashed in the basement and now rehung. The flamboyant floating-surfboard staircase, with its gold-tone railing, gained cork-surfaced treads. While the walnut-paneled mezzanine became the library, the marble-walled bank vault safeguards something precious, gallery space.