Radical restraint. That’s what Interior Design Hall of Fame member Patrick Jouin and his partner, Sanjit Manku, opted for when renovating the very first restaurant opened by their longtime client, multi-star chef Alain Ducasse. “We had no desire to erase its history,” Manku says of the mythic belle epoque surroundings—notably a frieze of portraits said to portray Louis XV’s many mistresses and a ceiling fresco of a nymph and frolicking angels in an azure sky.

The answer was to frame and highlight the ceiling fresco by suspending, directly beneath it, an immense halo composed of 800 pieces of Murano glass aglow with LEDs warmed to an amber honey by foil. Below that, in turn, Jouin and Manku placed a waiters’ station partially enclosed by curving screens in cherrywood and treated steel. The whole thing rotates on a black granite disk resting on an ebony base, creating an effect that Jouin compares to a “theater” where diners seated at the up-lit linen-draped tables can watch a “ballet” of staff completing dishes about to be served.

With the renovation came a name change: from the Louis XV, like that frieze, to the chef’s own. As his flagship, perhaps it should be called just Ducasse I. 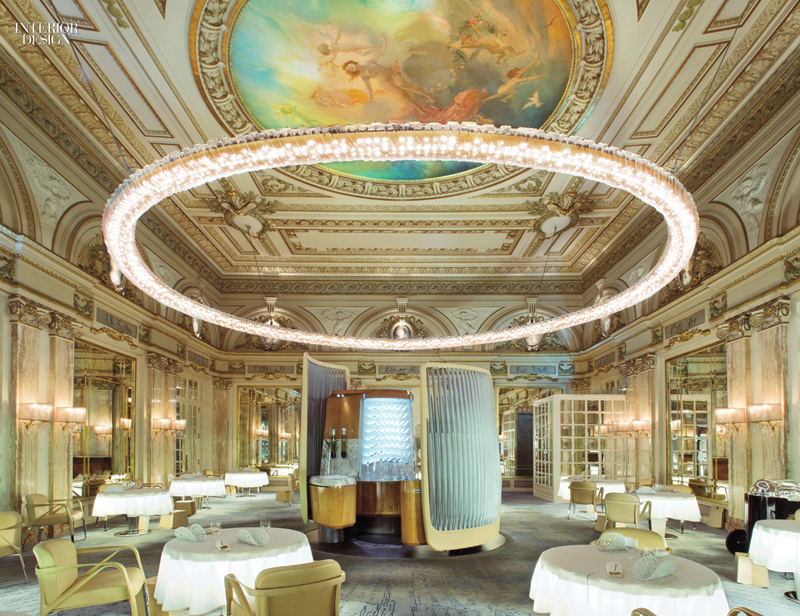