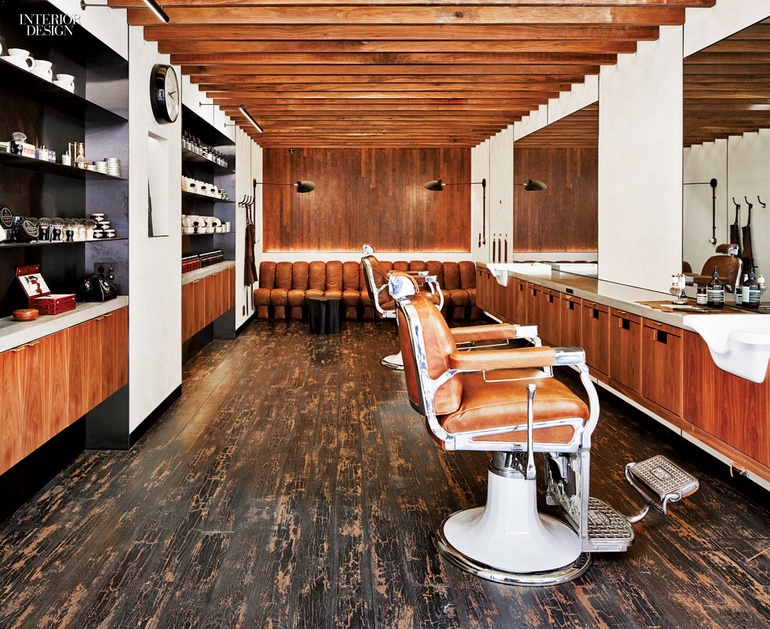 To attract and retain bright young executives, competition in Seoul is fierce. So the consumer-finance arm of Hyundai Motor Group called on design director and principal Philippe Paré to provide a highly unusual employee perk as a corporate recruiting tool. “Other companies’ amenities are buried deep inside the office,” Paré says. Whereas this one, right at street-front, is “all about drawing people’s attention.”

Composed of a barbershop, a nail salon, and a broadcast studio, named Cut, Polish, and On Air, the conjoined storefronts, totaling 1,600 square feet, look more like a row of independent businesses than a break-out space. Each of the three is different. Dark and masculine, Cut is defined by distressed walnut, cold-rolled steel, and vintage leather—there’s even a pair of 1950’s barber chairs from New Jersey. Bright, feminine Polish is the antithesis, with surfaces that gleam in brass, marble, lacquer, and ceramic mosaic tile. During treatments, male and female colleagues can connect through a peephole in the dividing wall. Fully pampered and primped, they look as glamorous as the talent at On Air, where cultural and corporate programming is recorded in a futuristic setting glowing blue from LEDs.