Room On The Roof: 2015 BoY Winner for Budget 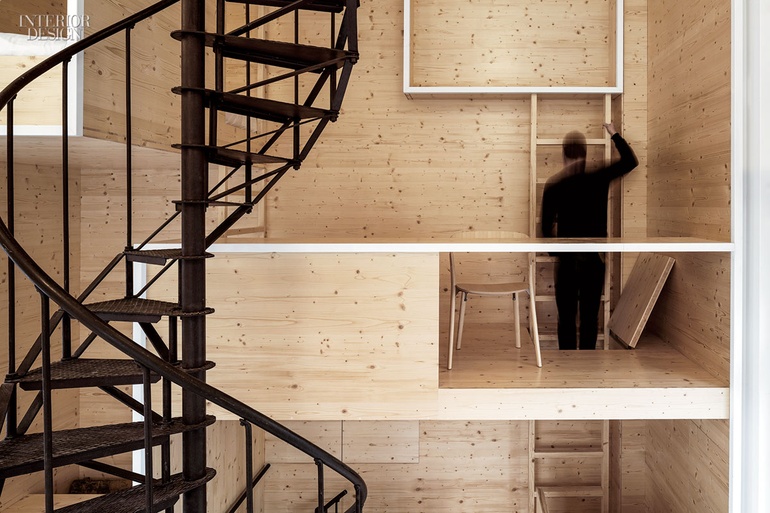 Rapunzel had no choice. But there are actually volunteers to reside in the tower capping the neoclassical flagship of this chic department store chain. That’s because Room on the Roof, as the structure has been christened following a reinvention by Jeroen Dellensen and Jaspar Jansen, now hosts short-term artist residencies in collaboration with the Rijksmuseum.

The envelope is simply painted white, with epoxy flooring. Then the unusual proportions, only 175 square feet of floor space but a 26-foot ceiling, suggested a topsy-turvy scale play in the form of a three-level built-in. Constructed from clear-finished pine, a kitchenette, an office, and a sleeping loft stack up against one wall, linked by ladders. Furnishings, which take their cue from the stripped-down architecture, include little more than Ronan & Erwan Bouroullec’s armchair in molded ash and Jasper Morrison’s glass pendant globes. The partners also provided a white telescope for gazing through the existing arched windows, perhaps at the royal palace across the city’s central square. Likewise existing were the black-painted wrought-iron stairs spiraling through the center of the room. Emphasizing the ceiling height, Dellensen says, “They add to the fairy-tale atmosphere.” And they give maintenance workers access to that piece of equipment so indispensable to today’s princess: a mobile phone tower.