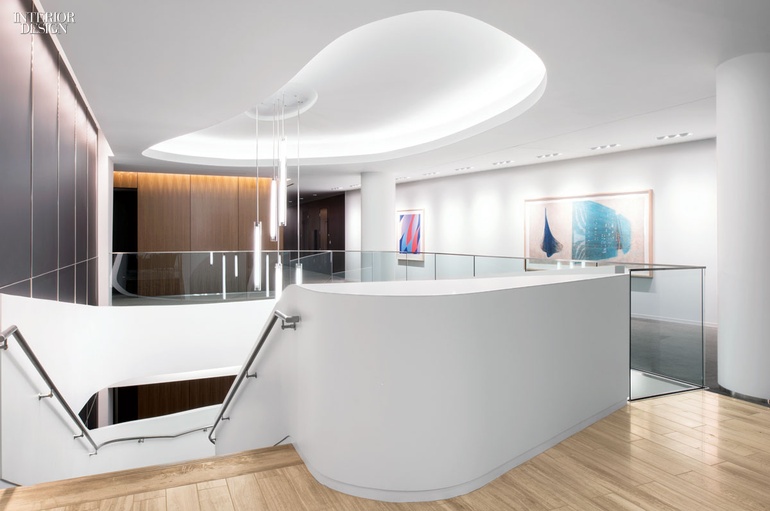 Prior to being renovated, the Kansas City office of law firm Stinson Leonard Street was “very Colonial Williamsburg,” says Gensler design principal Todd Baisch. “It was dark, closed, and traditional, with lots of antiques and gilt-framed oil paintings.” Well then, surely the redesigned space, now a paragon of clean-lined modernity, met with some resistance? “No!” he clarifies. “They were so ready for the change.”

Stinson’s radical reinvention from old guard to vanguard mirrors an industry-wide shift to spatial transparency and openness. Here, that meant abundant interior glazing, low workstation partitions, only two sizes of private offices, and on the reception floor, a perimeter now open to 360-degree views of downtown and beyond. These features also helped address the client’s request for a more efficient and more community-building layout. Gensler’s savvy space planning and operational improvements, including a 75 percent reduction in records, helped Stinson shrink square footage by about a third (to 131,800), which, in turn, allowed them to stay put during the renovation.

Just as important, scaling back brought staff members together, literally and figuratively. “The practice of law is still very much about individual work; it’s not so team based,” Baisch explains. Compounding that, “lawyers are tethered to their phones and computers, and may never meet their clients face to face.” Or, for that matter, their coworkers. “When you’re so hunkered down, it’s hard to build the type of relationships that are vital for growing business and sparking collaboration.”

Creating connection in a more concrete way is the feature stair that stitches together the main conference and amenities levels. (There are eight floors total.) Stone treads pop against a spine of dark-bronze backpainted glass, creating a dynamic centerpiece. “The staircase was conceived as a sculptural object, reflecting that Stinson is very much a patron of the arts,” says Baisch. Subtle contours are a recurring theme, from the cove lighting above the stair to the cafe?’s wavelike ceiling baffle. “We were very intentional with the use of curves,” says Baisch, “adding elements that relate to the stair without distracting from it.”

The relaxed cafe? is a deliberate foil for the more refined office proper. Reclaimed white-oak wall cladding backdrops a living-room-esque lounge area and the dining room, where sunshine-yellow seating nooks lend verve. Between this eatery and a series of art-filled meeting and conference rooms, “Stinson can now entertain, get more clients and public figures in the space, and host board meetings and legal education events for the public,” says Baisch. Community minded indeed.