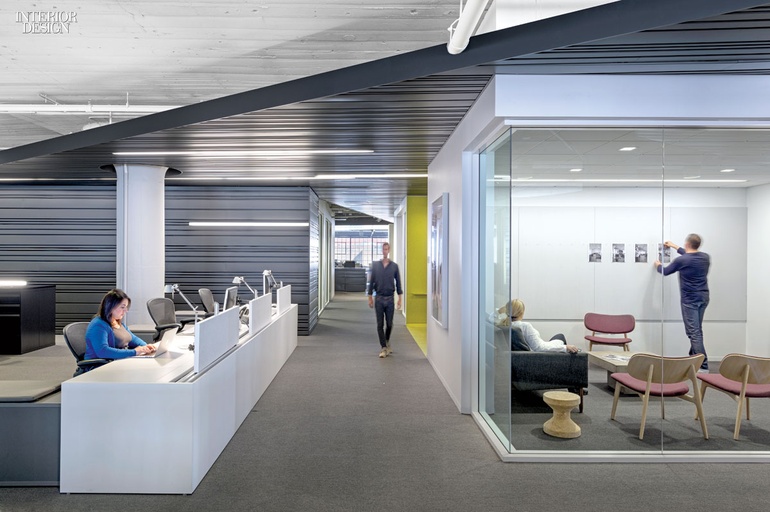 Journalists are notorious for coining catchphrases. “Crowdsourcing,” for instance, first appeared in the pages of Wired. Staffers at the publication’s San Francisco headquarters hatched another sly moniker, this one for the cavernous corridor that divided the print and digital teams: the Berlin Hall. At one time, the arrangement made sense, as separate entities owned the magazine and website. When the two united under Conde Nast and the leadership of editor in chief (and former creative director) Scott Dadich, the members needed to bond, though. “That hallway symbolized separateness,” says Gensler principal Lisa Bottom, who oversaw the renovation of the 30,000-square-foot space. “We were told very clearly to tear it down.”

A second unification issue bedeviled the revamp: The early 19th-century SoMa warehouse long occupied by the company was actually two. A strategic gesture brought spatial and organizational harmony: a monumental ceiling system of aluminum slats painted a custom mid gray. Assembled from a kit of parts with an artist’s eye for detail, the feature segues diagonally from the entry across the floor plate,  thrusting through column bays, folding down onto walls, and otherwise orienting foot traffic to social and meeting areas. The idea, explains design director Karyn Gabriel, was “to ‘paint’ the architecture with this strong, dimensional element.”

The canopy’s origamilike folds also conceal much-needed cabling. Ironically, this company on the cutting edge of technology had almost none before the office renovation. “With half our staff in New York,” Dadich says, “we had a huge need for videoconferencing.” That activity now occurs in the so-called context room, partitioned from the entry lounge via retractable glass walls and boasting three flat screens with a custom Adobe touch interface. “Think Minority Report, with Tom Cruise moving things around on that glass screen in real time,” Bottom says. “Having that space has changed the way we work,” Dadich adds, noting that editors meet daily in the context room to design article layouts.

There’s no overt branding save for the cover logo rendered in painted MDF on the coffee bar’s backpainted-glass backsplash and the pigmented hues that punctuate the restrained grays. “The palette creates contrast and tension, which is just what Scott does in the magazine,” Gabriel notes. Indeed, Dadich has a penchant for inserting a rule breaker in an otherwise perfect layout—say, a headline at the end of a story. Of course he’s coined a name for this contrapuntal note: the Wrong Theory. The term stems from a garish neon rectangle Dadich placed on one cover as a “designerly eff you” at being asked by bigwigs to “just add more color” to a monochrome scheme. To his surprise, he grew to love the effect. Now that errant stroke of color finds its architectural equivalent in the off-key stroke of orange that electrifies the mostly neutral library. Turns out the Wrong Theory was right on.