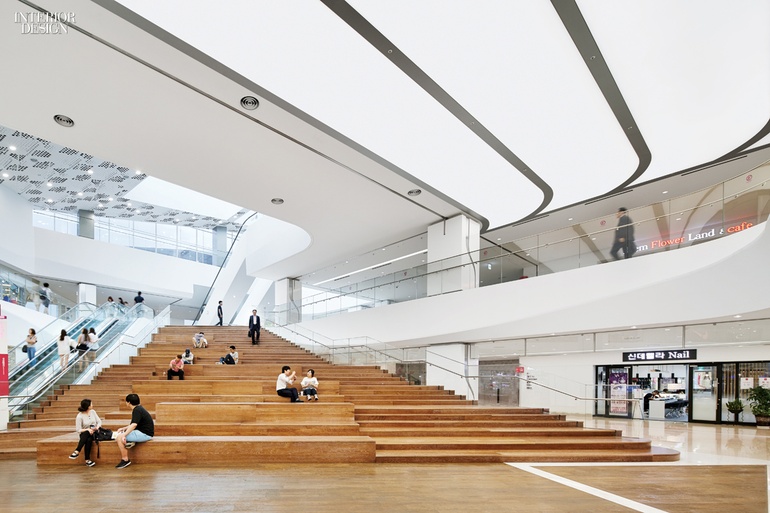 When is a mall not a mall? When it’s COEX, in Seoul, a sprawling 21-acre subterranean public arena housing retail destinations, movie theaters, almost 100 restaurants, and even an aquarium. Tucked below a convention center in the affluent Gangnam district, the 915,000-square-foot complex also serves as a pedestrian concourse between office high-rises, an apartment building, hotels, an airport terminal, and two subway stations, one brand new. In fact, that soon-to-open station provided an impetus for the megamall’s overhaul.

Another factor was the facility’s decrepitude. While the underground site had offered shopping since 1979, the most recent renovation occurred in the late 1990s. “Over time, the facility had been expanded and remodeled by probably 20 architectural firms,” explains Gensler Los Angeles principal Duncan Paterson, head of the firm’s Mixed-Use practice area. “What it needed was not an update so much as a complete transformation into a grand multiuse public space akin to New York’s Rockefeller Center.”

Paterson’s mission was twofold: to radically reorganize circulation and to connect the sky to the sublevel space, maximizing natural illumination and airiness. The ceiling heights varied from 10?½ to 12 feet, which according to Paterson is “wildly low” for a mall. “Everything we did was about slicing, cutting, and molding the streetscape upward and outward to allow light and air in,” he explains.

Raising the roof could also help establish a street-level presence where only a shallow glass pyramid had existed. To create a sense of occasion, the team replaced the pyramid with an undulating 168-by-170-foot aluminum grid, held aloft by corner pods whose free-form curves nod to Richard Serra sculptures. “Each pod is a different shape, with no right angles,” says Paterson. The zinc-clad structures also house covetable retail space. “Drawing high-end tenants was as important as making the space feel good.”

The team also excavated below the buildings in some spots to gain vertical space. Inviting the illusion of even more headroom are drop ceilings whose geometric cutouts are coffered with maple-veneer “beams.” Material choices are all about lightness, from perforated metal panels to pearly floors of sandstone, limestone, and granite. Shapes are organic, evoking—as Paterson puts it—“an unfolding white ribbon,” and spaces interconnect fluidly, drawing traffic between them.

The designers were attuned to both looks and longevity. “We designed something with greater flexibility for the future so it should really last,” says Paterson. The new COEX, he adds, is a “lovely, organized, smart, walkable experience.” For the hundreds of thousands of visitors now arriving weekly.