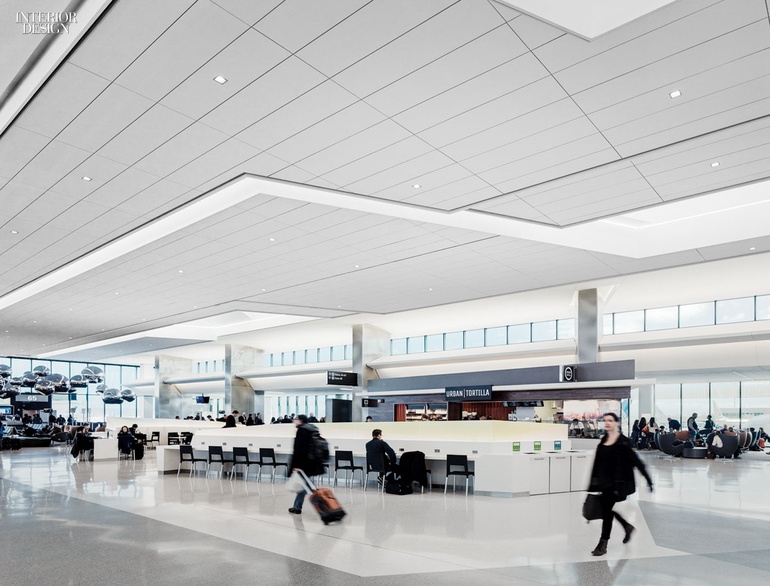 Before Gensler started renovating San Francisco International Airport’s Terminal 3 Boarding Area E, design team and client met for a vision session. It took place in the existing space, recently vacated by American Airlines for new digs and slated to be United Airlines’ future home. Built in 1979, the boarding area had low ceilings and no sight lines. “It was really dark,” recalls Gensler design director Melissa Mizell. “And when you looked toward the end of the terminal, all you saw were gate podiums. We started to imagine what it could be. We wanted people to walk in and feel this moment of joy.”

Joy is not an emotion typically associated with commercial air travel. But as plane seats grow ever more cramped and onboard amenities dwindle, Gensler is designing airports that are unexpectedly spacious and comfortable—that is, more enjoyable to hang out in.

That experience begins with arrival. As travelers enter the redesigned boarding area, the floor slopes down and the ceiling—now 23 feet high—floats upward in an expanse of white. Two rows of structural columns that once ran down the middle of the space were torn down, granting views to the far end of the terminal. The idea was to increase passengers’ sense of control by letting them take in everything at a glance.

For the main space, one of Gensler’s organizing principles was topography...with a twist. “We inverted the idea of terrain, creating ‘tectonic plates’ in the ceiling plane via a series of skylights and clerestories,” explains interiors design director Jeff Henry.

Also putting control in the hands of travelers is the “flight deck” near the entrance. There, a large glass projection screen is accompanied by six touchscreen kiosks that travelers can tap for details about the airport’s history, shops, and restaurants as well as its museum shows and public art.

Yes, you heard that right: the airport has its own accredited museum, billed as the first and only of its kind, with rotating exhibitions throughout the space. Gensler ensured the new boarding area gave pride of place to blue-chip works, such as major pieces by Bay Area–affiliated artists like Wayne Thiebaud, Robert Bechtle, and the late Jay DeFeo.

Gensler worked with several artists— Eric Staller, for one—to install specially commissioned pieces. On the wall and floor of Spyrogyrate, Staller’s interactive play area for children, large acrylic-coated metal discs covered in plate glass feature psychedelic spiral patterns; when stood on, the discs revolve and light up in a sequence of colors. “We love the Summer of Love feel to it,” says Henry.

Much attention was paid to illumination throughout. Some ceiling fixtures provide circadian adaptive lighting, which by simulating natural light helps bleary travelers maintain a natural sleep/wake cycle. At gate areas, floor lamps lend a living room–like touch. “You don’t expect flattering lighting in an airport,” Mizell points out, “and there’s something nice about having sources that are a little lower,” to supplement the overheads. Seating options go far beyond standard issue, too, including Arne Jacobsen’s iconic Egg and Swan chairs.

Restaurants and retail destinations are scattered throughout the boarding area. To mix things up for frequent flyers, two concession spaces host pop-up boutiques for six months to a year each. The airport supplies the space and shelving sys- tems while allowing tenants (all small local businesses) the flexibility to create their own look and vibe.

New extra-large restrooms feature private dressing rooms where travelers can change and freshen up. Even here, floor- to-ceiling windows, though screened, let in natural light: a rarity in airports.

Gensler opened up the end of the boarding area by installing floor-to-ceiling glass that offers panoramic views of taxiing planes. “Often seating areas just have a ribbon window, so you’re a bit disconnected from the airfield,” says Henry. “We wanted to get people excited about flying and to bring in as much daylight as we could.”

In the area by the picture windows hangs a commissioned artwork by Merge Conceptual Design. Dubbed Sky, it features 27 stainless-steel globes with circular openings; thanks to LED edge lighting, the interiors seem to glow softly as they subtly change color.

If all that isn’t relaxing enough, travelers can chill out pre- or post-flight in the yoga room, the second Gensler has de- signed for the airport (the first was in Terminal 2, which the firm renovated in 2012). Other airports, O’Hare and Heathrow among them, have followed suit. Boarding Area E’s is a calm, neutral space, with a full-height fissure on a wall lit from within. “It’s about getting into the right frame of mind,” says Mizell. With a boarding area this zen, the days of mourning flight delays may finally be over.

When San Francisco International Airport’s Terminal 2 opened in 1954, going through security was a piece of cake. Today, not so much. Gensler’s 2012 revamp of the terminal aimed to reduce travel stress through art- and hospitality-inspired strategies, now percolating through the firm’s subsequent renovations at the airport.

Local and organic dining options, like the Napa Farms Market gourmet deli, lend the space the air of a marketplace, akin to that of the city’s Ferry Building. “We didn’t want the area to feel like a traditional food court: one big hub with Conestoga wagons around it,” says interiors design director Jeff Henry. “The idea was to pull the restaurants apart and have them adjacent to your gate so you could linger and see your plane coming.”

Sustainability was a big mandate. To minimize plastic-bottle waste, Gensler designed hydration stations so travelers could refill bottles post-security. Skylights and clerestories flood the terminal with sunshine, and fixtures with daylight sensors adjust illumination levels throughout the day. Terrazzo flooring incorporates recycled glass chips. And displacement air ventilation saves energy while sending out cool air at human level rather than from above.