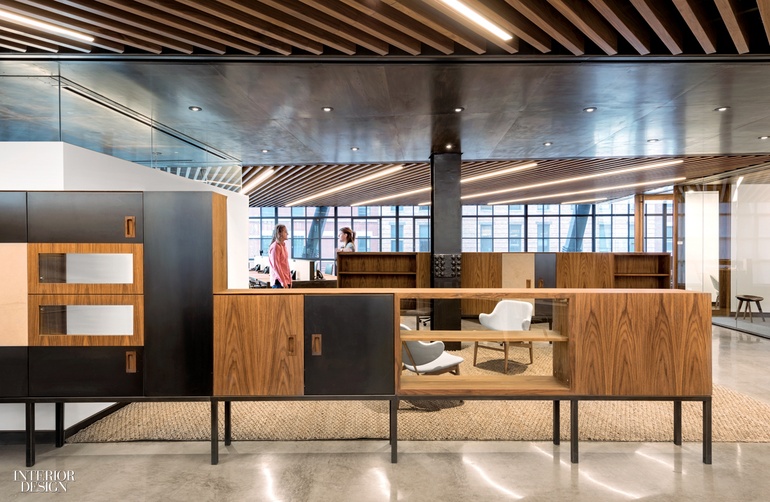 Few Manhattan neighborhoods have undergone as rapid a rebirth as has the Meatpacking District. Over the past 15 years, the erstwhile butchering hub evolved from edgy countercultural haven into a locus of high-end retail and hospitality. Now corporate entities are making their mark, seeking the street cred such an address confers.

Case in point: both Facebook and Ferrari angled to secure space in Morris Adjmi Architects’ iconic torqued glass-and-steel edifice on Washington Street, kitty-corner to the new Whitney. But South Korean megabrand Samsung prevailed in the end, leasing the entire building for its first Manhattan outpost: a combination office and experiential showroom masterminded by Gensler. “Samsung does amazingly creative work, which I think they don’t get enough credit for,” says San Francisco–based principal—and Interior Design Hall of Famer—Collin Burry. “This was to be their stake in the sand, so to speak.”

Spread over three floors, the 12,500-square-foot space bears an angularity that references the building’s twisted form and the neighborhood’s oblique collision of street grids. “Instead of sticking to classic orthogonal planning, we cranked everything askew,” Burry explains. Walnut ceiling slats and runs of workstations are arrayed diagonally, directing eyes to Hudson River views through full-height glazing. Said workstations are height-adjustable via a hand crank that the designer says “had the right industrial feeling so it doesn’t look like typical corporate-tech office furniture.” Leaning more residential is the wedge-shaped lounge bordered by mid-century-esque custom cabinets at every floor’s center.

Although the company’s technological wizardry is omnipresent, from key cards to multimedia, you won’t find the brand name anywhere but the lobby. And there are no kicky hues either. “We wanted to make the space feel like Samsung,” says company retail designer Eslam Khalil, “without slapping the logo everywhere, or deploying supercrazy colors or features like slides. That’s just not Samsung.”

The office is, however—to a T.