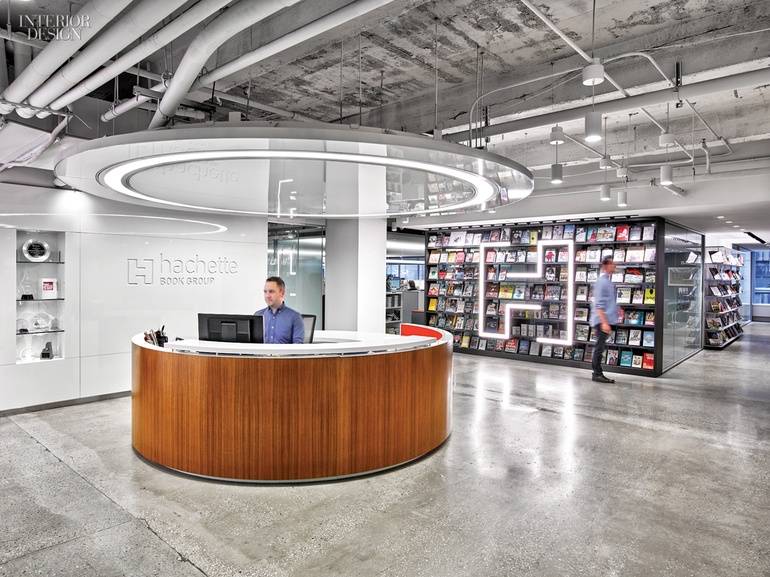 When Michael Pietsch, Hachette Book Group’s CEO, announced to his staff that their new Midtown office would be open plan, there were gasps. How would editors negotiate high-stakes book deals, regale famous authors, and edit meandering manuscripts without closed-door offices? And what would become of their books, piled nearly to the tipping point?

A year after the move, no gasps are heard among Hachette’s 435 employees, all of whom sit in hushed, low-wall cubicles spread throughout the 140,000-square-foot space. The coveted private offices are gone, replaced by a bright, expansive headquarters designed by Gensler to foster the kind of impromptu collaboration that the tech industry heralds. But this 100 percent open-plan publishing office—the first of its kind in the country—balances interaction with the need for intense quiet. At the same time, the plan honors the distinctive imprints that make up the Hachette brand.

To unite the space’s two vast floors, the designers created a double-height opening and a spiraling staircase. “The client had a really tight budget, so we knew that it was a little risky to propose cutting big holes in the floor,” says design director Mark Morton. “But they got onboard quickly.” While building physical linkages, Gensler wanted to ensure that individual imprints—from Grand Central Publishing to Little, Brown —weren’t subsumed by the newly unified company. The most explicit branding nod to Hachette is the glowing neon H on a hulking bookcase behind the reception desk. Everywhere else, imprints get their due though displayed logos, book art, and a corner library. Structural columns feature select best-sellers and quotes, covers of such titles as Donna Tartt’s The Goldfinch and Jerry Pinkney’s The Lion & The Mouse enliven game-room walls, and picture frames highlight a rotating collection of book spreads. “While the office feels more open and community-driven,” says design director Brian Brindisi, “you always have designated space where you can feel connected to your imprint.”

Carpeting underfoot and white-noise machines overhead dampen ambient noise. Still, editors must occasionally escape their colleagues for some heads-down work in a phone booth, an empty conference room, or a six-person “quiet car.” However, those hideaways haven’t been in high demand, and so far, nobody has tried to colonize one. “Some people had 300-square-foot offices in the old space, so we thought they would camp out in them,” says Hachette vice president of operations planning and corporate facilities Mark Kent. “To us, that’s a big win.”