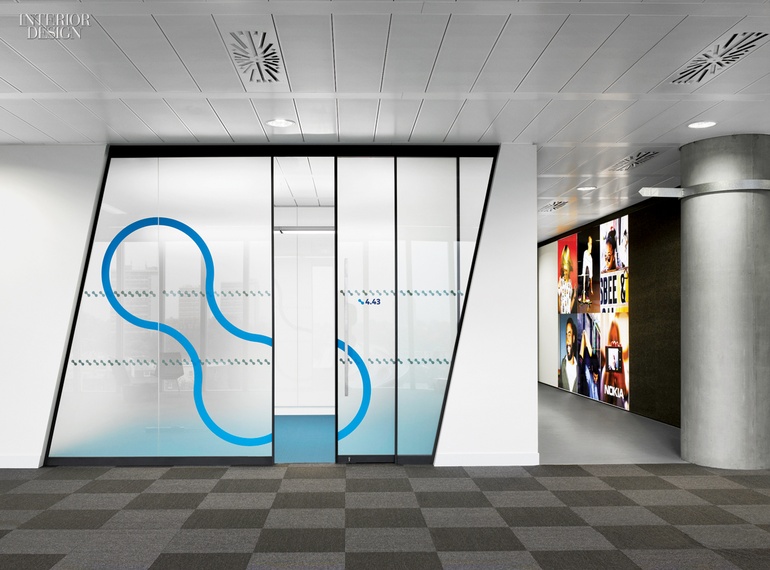 With a cell phone, people can work (almost) anywhere. But even a multinational cell-phone maker knows there’s an upside to in-person collaboration. So when Nokia decided to move its U.K. head office from the town of Farnborough to central London, with an eye toward attracting urban-minded millennials, the company radically changed its work space and work style. The goal was to make the office a magnet for staffers who’d grown accustomed to largely working from home—or as Gensler design director Matt Jackson puts it, “Bringing everyone back to the mother ship.”

The first floor sets the tone with a sci-fi feel, “almost as if a spaceship landed there,” Jackson says. In the multistory atrium’s retail area, customers can browse Nokia’s latest offerings beside an indoor reflecting pool that mirrors the lights of the surrounding displays.

On office floors, wayfinding had to be extra clear so visiting employees from around the world could orient themselves. To mark each zone, Gensler worked with the company’s branding division to reinterpret each letter of “Nokia” as a large, brightly colored abstract shape: For example, the blue N resembles a bone, the black I an apostrophe.

Only two weeks after the move, Jackson reports, office occupancy had skyrocketed to 65  percent, more than double what it had been in the old location. “The ’90’s campus was very much of its era,” he notes. “This space is designed more for the new generation.” And, indeed, the future.