One Firm Masterminds 5 Projects For Hyundai 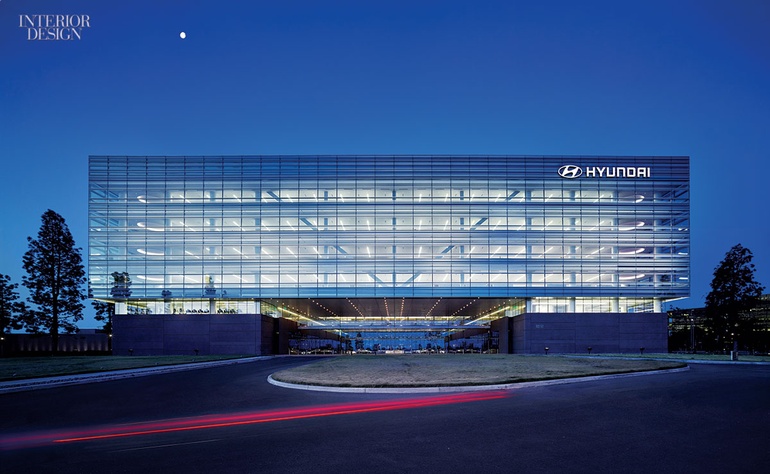 One firm, one client, many spaces: Gensler’s L.A. office masterminds five projects (and counting) for Hyundai. A longstanding relationship between the car company and Gensler principal and design director Philippe Paré has resulted in projects that span the globe. Despite the variety, one factor pervades all: “An expectation about the level of detail and craft,” says Paré.

Description: From outside, this Fountain Valley, California, structure reads as a shimmery glass volume atop an obsidian-hued precast-concrete base. “A diamond on a pedestal,” is how principal and design director Philippe Paré describes the 475,000-square-foot LEED Gold headquarters. Indeed, Angelenos traversing the 405 Freeway throughout the 21-month construction period have been privy to that diamond’s polishing.

The real beauty, however, lies within. A completely empty interior courtyard pays homage to a Korean ceremonial procession; that’s right—no landscaping, sculpture, or fountain. The contemplative void, according to Paré, “heightens awareness of shadows and light and creates a strong relationship with the sky.” The project, he explains, is “about the power of space, not lavish materials.” Soaring through four floors of offices is an airy atrium, livened by a kinetic play of suspended switchback stairs.

Also designed for movement is the workplace. Workstations are inboard, freeing the perimeter for a terrazzo circulation path that skirts the fritted-glass window walls, culminating in a loop around the atrium. (The goal: no dead ends.) Further inboard still are private offices fronted in glass. Boundaries almost vanish; nothing blocks the sunlight.

At 10,000 square feet, reception is immense and almost empty, too. Sparse seating and a freestanding solid-surface desk leave plenty of room to celebrate the main event. New Hyundai models are driven right in, creating a de facto showroom.

Paré designed it to achieve literal and figurative lightness, but attaining those aims was a structural challenge. Two layers of ¼-inch steel, pressed together and welded, form the stair walls. The 16 prefabricated panels were assembled on site and lacquered (in the field) with automotive paint. The inner glow of pristine Thassos marble treads and risers is augmented by an LED ribbon within the handrail.

The project was far from a single-element phenomenon, however, and each floor possesses its own personality. Procession starts with a sense of compression in the moody elevator lobby and expands as you move into the crisp white workplace. Arrival comes on the middle level—“Meisian and spare,” Paré notes. One flight up is a game room, its Dutch foosball table anchored by dimensional-looking geometric tile flooring. The lower, library level intermingles textures and materials: a herringbone-pattern English oak floor meets lacquered cabinetry backed by ceramic tile resembling folded paper.

On all levels, workstations align with pilasters of operable windows, and each seat enjoys a glimpse of the black-on-black core, where cabinetry and painted drywall delineate storage and copy areas. It’s a little like looking into the mysteriously dark interior of a bone-white seashell.

Description: Not just about cars and consumer finance, Hyundai is increasingly focused on providing exclusive amenities to its credit-card holders. A recent case in point is this four-story structure in Seoul, an all-encompassing tribute to music and the artists who make it. Front and center is a library featuring a colossal collection of books and 10,000 vinyl albums. There is also a café, rehearsal studios with adjacent musicians’ lounge, and a double-height concert hall.

Built into a steep hillside, the 11,000-square-foot building sits on a plaza. In addition to overseeing interiors, Gensler helped recast the exterior with more expansive glazing and Cor-Ten cladding. Its showpiece library is highly visible through the glass front. So is the oblong café opening onto the plaza, which hosts al fresco performances.

Throughout, Gensler went for “gritty, real, and authentic,” says Paré, pointing out that the library shelving, for example, is cold-rolled steel, “welded in place so imperfections show.” Rehearsal rooms are shipping crates, their insides a crimson cocoon of carpet tile and fabric-covered panels.

The firm also collaborated with two street artists, JR and Vhils, on site-specific installations. On the underside of the canopy, “photograffeur” JR’s mural of the Rolling Stone’s infamous 1969 Altamont, California, concert epitomizes sex, drugs, and rock ’n’ roll. The back wall spanning the rehearsal- and performance-hall levels features a textured work by Vhils. A digitally created composition was projected on the wall, traced with paint, and partly jackhammered in the plaster for a nice ’n’ rough effect.

Description: How did Open Studio get its name? The film and recording facility snaking through the lobby of one of Hyundai’s three Seoul headquarters buildings is, well, transparent. And it may just be the first amenity of its kind. “I’ve never seen anything like it,” affirms Paré.

The structure, a mere 610 square feet, is the antithesis of most recording studios—generally black boxes tucked away in the far reaches of corporate space. While the see-through pod’s primary function is a venue to film corporate communication pieces, high visibility was equally essential. “The building is one block from Parliament, and the lobby can be seen by white-collar workers passing by,” Paré notes. “Hyundai thought of it as a hiring and retention tool.” Plus a way to profit from typically underused space.

Of course such visibility meant the effect had to be stunning. “We conceived it as a precious object floating in the center of the lobby,” says the designer. Curvy and sculptural it would be, but the details—bending 11-foot high glass panels to create the form—proved tactically problematic. So the team researched aquarium technology and discovered that chunky 2-inch-thick acrylic would fit the bill. The 12 panels recess into floor and ceiling channels for a thoroughly seamless look. Inside, an electrified grid ceiling accommodates lighting and rigging, while sheer acoustic drapery can be drawn if needed. A ribbon of LEDs outlines the studio, its sinewy line continuing across the ceiling to the reception desk. “It’s gestural,” says Paré, “turning anything into design.”

Description: In tech talk, UX stands for user experience. Hyundai’s UX Lab was conceived to enhance that of its credit-card holders. “We thought about ways to merge the digital and analog worlds,” says Paré. He chose materials to reflect that concept: “We took digital to mean man-made and sleek.” The second, analog, would correspond to their natural, tactile counterparts.

Unfolding just past the entrance, the 8,400-square-foot open-plan facility is predominantly a collaborative-social area. It’s analog, thanks to bleachers, flooring, and an elaborate baffled ceiling, all stained oak. “But it’s not warm and fuzzy,” Paré notes. Crisp X geometry derived from the project’s name takes care of that.

The adjacent workplace is digital. Backpainted glass, an expanded mesh ceiling, and a super-reflective, polished stainless-steel shelving unit express that part of Gensler’s conceit. The bookcase, in fact, is a bit James Bondish: Activated by a foot pedal, the mobile unit slides from right to left to open (or conceal) a brainstorming room. “We see so many tech spaces that go for a playful and childish look,” Paré notes. “We took the opposite approach, embracing a sci-fi, futuristic aesthetic.” The aim? The highest of hi-tech.