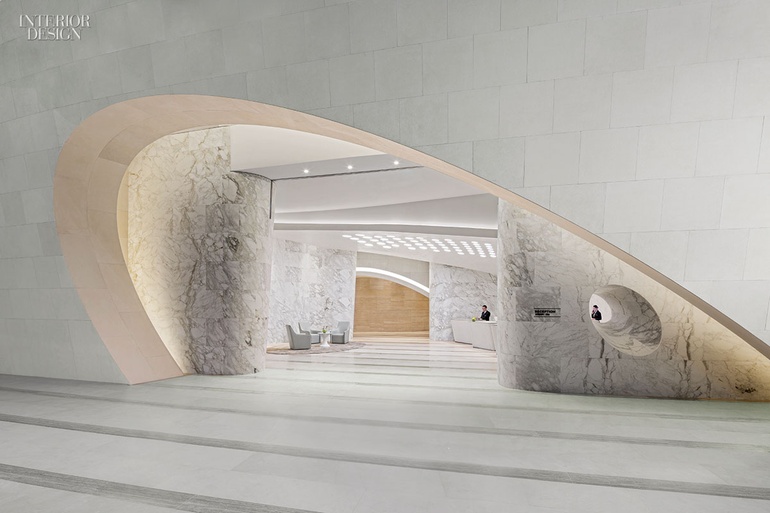 The 522-room Hyatt Regency hotel at the Incheon International Airport, a 40-minute drive from downtown Seoul, was already a thriving business and leisure destination. It was so popular, in fact, that the owners of the property, KAL Hotel Network, decided to expand by building a new tower. The plan was to house an additional 500 rooms for short- and long-term stays as well as banquet, conference, and recreation facilities.

The client retained Gensler based on its sterling reputation in international hotel design: the firm has envisioned more than 100 top properties across the U.S. and in 20 other countries—from Kuwait to the U.K.—for brands including the Four Seasons, Ritz-Carlton, Marriott, and Westin. Gensler’s hospitality division was founded two decades ago by architect Tom Ito when the firm was hired to renovate the Beverly Hills Hotel. Ito himself served as project principal for the Incheon Hyatt, overseeing a team that included Kap Malik, a fellow principal in the Los Angeles office, as the primary architectural designer.

The program for the 785,000-square-foot tower was developed holistically, explains Malik. “When we are overseeing both architecture and interiors, we have a very integrated process”—especially when it comes to hospitality projects, he explains. “The two teams come together from day one.” Ito elaborates: “We are involved in all aspects of the building, from siting and sourcing to landscaping, acoustics, and selection of carpets, furniture, and art. Decisions are driven by how the hotel functions, from an operational perspective and from the vantage point of the guests.”

The Hyatt Incheon was no exception. The team began by conducting an analysis of the site, located on a manmade island just off the South Korean coastline. The overarching design concept sprang from that investigation: the interplay of air and water, of movement and flight, guided everything from the facade to the finishes. “The blue tones of the granite and glass exterior are inspired by the ocean and the sky,” notes Malik. Adds Ito, “Fluidity even informed circulation through the hotel, which is all about motion.” That plays out in public areas, with complex-curved walls that evoke airplane cabins and open vistas offering sight lines into contiguous spaces. The notion of fluidity also drove efforts to harmonize indoors and out, for instance, opening up the restaurant and indoor pool to their adjacent terraces. The palette, too, reflects the surrounding landscape, with an emphasis on muted tones and organic materials like the soothing limestone that clads reception. Totems of Korean culture—such as the crane and the pearl—inspired carpet patterns in public spaces and the motifs of etched glass that appears in guest rooms. (The new tower, in plan, is a play on the classic yin-yang symbol, from which KAL’s own logo is derived.)

The chairman of KAL was also keen to obtain LEED certification, and Gensler was up for the challenge. “It’s not the easiest thing to achieve when working on a luxury property,” says Ito, “because guests expect nonstop comfort as well as visual appeal.” All environmental decisions entailed weighing options and balancing sustainability against cost and practicality. Gensler embraced myriad strategies, including siting the building for sun orientation and wind dynamics, both of which influenced the bowed shape of the curtain wall. “We even considered how construction waste was disposed of and sourced locally as much as possible,” adds Malik. The hotel ultimately achieved a LEED Gold rating, making it one of the first such structures in the country.

The success of the West Tower—and its integration with the existing building via a sky bridge at terrace level—also impressed the client, which then raised the standard of the hotel to its Grand Hyatt designation. A renovation of the original East Tower is currently being planned, and Gensler is now helping expand the Incheon airport itself.