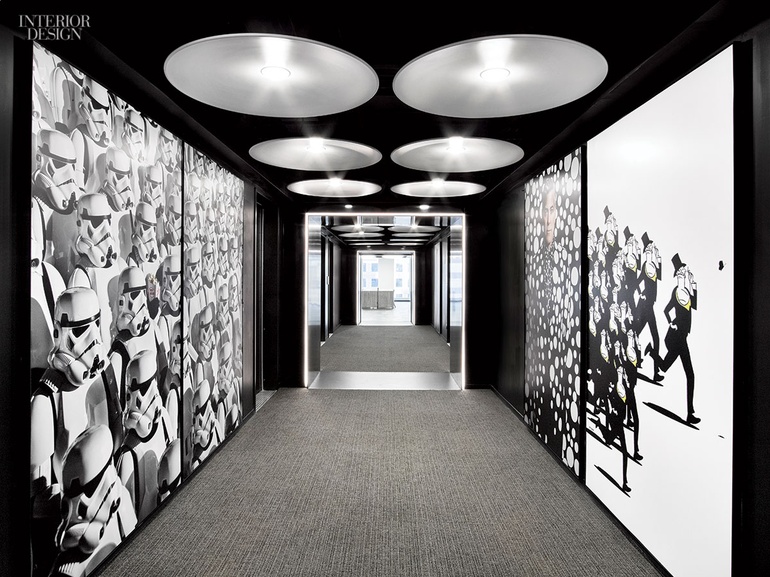 At the dawn of the 20th century, a patch of Midtown Manhattan better known for dodgy music halls and razzle-dazzle electric lights received an auspicious new tenant: The New York Times , in a building of its own and with an imprimatur on the neighborhood now known as Times Square. Since then, other publishing entities flooded in, rendering the area the de facto hub of the industry. Time-Life erected its own skyscraper a few blocks north, in Rockefeller Center, in the 1950’s, countless smaller outfits soon nestled in behind the square’s increasingly riotous neon and digital displays, and Condé Nast took over a glossy new-build tower on 42nd Street in 2000.

Condé was again on the move 14 years later—this time to one of the world’s most symbolic sites, One World Trade Center. The decision to move legendary properties like Vogue , the New Yorker , and Bon Appétit into the 1,776-feet-high totem signified another rebirth, not only for a neighborhood still recovering from 9/11 but also for the embattled media industry itself. Who better to tackle the assignment than Gensler, which weathered the economic downturns of the early aughts and bounced back even stronger with major projects like the Shanghai Tower?

The project’s vast scope proved a perfect demonstration of the firm’s dexterity at grappling with a complex program: an estimated 1.3 million square feet spread over floors 20 through 44, encompassing 16 print titles and 20 websites with hugely varied desires and requirements—not to mention intense security mandates. Now that the editors, writers, food stylists, and art directors have settled into work spaces with jaw-dropping views, Gensler’s genius is on full display.

Regional managing principal Robin Klehr Avia, managing director and principal Rocco Giannetti, and design director and principal Mark Morton, all based in Gensler’s New York office, repeatedly referenced the skyscraper’s beveled corners throughout the interior, from the guest lobby’s diamond-pattern rug to the diagonally oriented veining of the marble slabs in the 55-foot-high main lobby. Even ceiling grids, scored with linear LEDs, are turned askew to ensure they work with the building’s geometry. Angular shapes serve as a unifying theme, says Morton, who calls the motif “a kind of iconic Condé Nast look.”

That look—aspirational but not gauche, hospitable but still cool—is bolstered by the minimalist-chic palette of stark white (note the cafeteria’s terrazzo flooring), dark gray (tufted leather seating in elevator lobbies, perfect for impromptu meetings), and glossy black (almost everywhere else). But, crucially, such details as coffered ceilings and 5-foot-wide office doors don’t detract from the main event: the company’s famed cultural production. Images culled from its titles are omnipresent. Elevator lobbies boast elongated digital screens programmed to display magazine covers and upcoming events. Conferenceroom walls and fashion closets are cloaked in vinyl reproductions of published photography by greats like Irving Penn. And each floor has a long central throughway that’s equal parts runway, gallery, and sneakily disguised utilities room. “All services in the building face inward, creating an east-west corridor on every floor, with pipes spanning the ceilings,” Morton explains. “We made something of it so every brand has the opportunity to express itself and change the installation to keep things fresh.”

Speaking of fresh, there’s the 35th-floor cafeteria—accessed from the guest entrance and library via a cable-hung spiral stair—where chefs prepare kale and quinoa lunches at freestanding food stations. “We wanted the space to feel like a marketplace,” Klehr Avia notes. That meant building in varied seating: enclaves of banquettes separated by smoked glass, café chairs around intimate four-tops, and communal tables topped with Calacatta marble. The adjacent coffee bar is a hot spot for caffeinating as well as holding meetings, interviews, and even parties (a shade descends over the glass display case to hide menus and equipment). “We had another client visit and he was floored by the amount of people utilizing the space,” Klehr Avia adds. “We’re now doing a full coffee bar for that client.”

Those people utilizing the space are networking and creating, of course, but also enjoying the view. Seemingly every corner has a stunning vista, whether of the Statue of Liberty or everyday downtown hubbub, the slowly-but-surely revitalized financial district included. As Morton says, “All the views are different. And each is great in its own way.” Sort of like the city itself: always changing, always riveting.