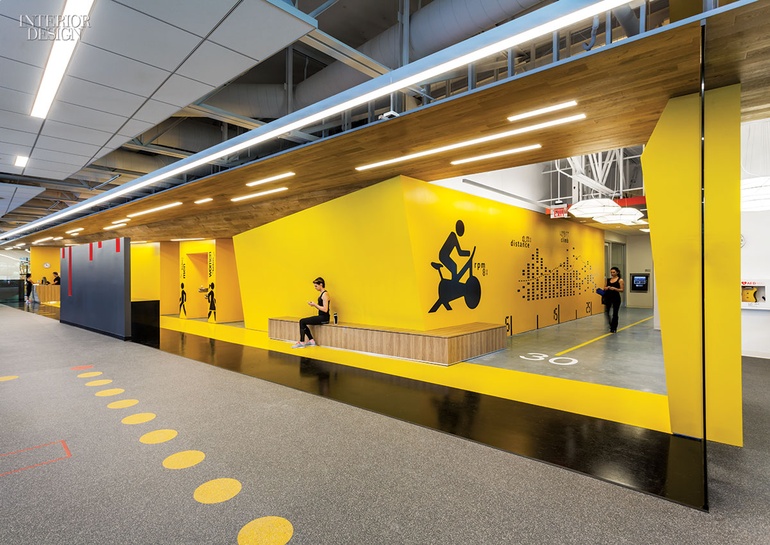 Game rooms. Espresso bars. Stocked pantries. The tech titans of Silicon Valley are famous for providing employees with top-notch perks in an effort to lure and retain top-notch talent. Also part of the amenities race are so-called wellness programs, from lunchtime massages and meditation sessions to full-on gyms. Gensler’s San Jose office has designed its share of on-site workout facilities for such clients, but, in a recent project, went the extra mile. The firm’s lively design for the Mountain View, California, headquarters of software behemoth Symantec not only provides a 12,000-square-foot setting for all the exercise offerings staffers could desire but also generates plenty of energy itself.

Symantec initially had something a bit less ambitious in mind. The company reached out to Gensler, a long-time collaborator, because it had outgrown its old fitness center and wanted to create a larger one in another building on campus. But when the planning stage coincided with bigger-picture discussions about long-term workplace strategy, Symantec realized the gym could become a signature feature—an expression of brand DNA as well as a recruiting tool. “Something innovative to represent an innovative outlook,” says John Scouffas, Gensler principal and design director of the project.

The undertaking required partially gutting the ground floor of the chosen building, a two-story tilt-up concrete structure of the sort that’s ubiquitous in the Valley. Out went open-plan work areas, conference rooms, and restrooms, not to mention the ceiling and the concrete slab floor (so plumbing could be redone to accommodate locker-room showers). In went SYMfit, a dynamic exercising and socializing space characterized by jaunty angular forms, sporty graphics, and a liberal use of bold yellow—one of Symantec’s brand colors, which the Gensler team enthusiastically embraced as appropriate for a workout space. The hue beckons at the entry, demarcated by a large-scale inverted steel L. “We added a portal to make the entrance visible” in the sea of parking spaces, explains project manager and principal Christine Laing. “And to signal this isn’t just an ordinary office space.”

It surely isn’t. Just inside the door, a lounge that doubles as a meeting area and work space has a wall of bike racks mounted on an aerial map of Mountain View, with cycling routes highlighted in red. Employees swipe in at an angular oak reception desk, then proceed down the main corridor, its polished concrete floor stenciled with numbers—a nod to the fact that in sports and fitness everything is measured and quantified.

On one side of the corridor, a large, open workout area is outfitted with equipment that goes beyond the standard treadmills and elliptical machines. TRX, anyone? Opposite, the locker rooms are tucked into a core wall composed of yellow-painted gypsum board that has sections jutting out, “adding movement to the space,” Scouffas says. Playful stick figures sprinkled throughout are appealing graphic elements that also help guide gym-goers to their destinations; one denoting the spin room pedals on a stationary bicycle, for instance. “The pictographs serve both a wayfinding and place-making function,” Gensler environmental brand manager Kerra Macdonald explains.

The team took special precautions to ensure that music pumping from the spin room and group exercise studio doesn’t disturb those hard at work in the offices adjacent to and above the gym. In both spaces, walls were beefed up with layers of insulation and a suspended ceiling comprised of double-layered gypsum board on spring isolators was installed. Baffles of upholstered red foam hang on the walls. Elsewhere, acoustic foam was added to the exposed ceiling.

The most unusual design feature is the angled canopy over the main corridor. Made of MDF and clad in engineered-oak flooring evocative of a basketball court, the structure adds the warmth of wood to the space, and its dynamic shape injects yet another jolt of energy. The complex feature certainly wasn’t easy to pull off, though. Computer modeling proved a spatial and technical feat. Installation was another challenge: “The flooring guy,” recalls Laing with a laugh, “said he wasn’t used to working overhead.”