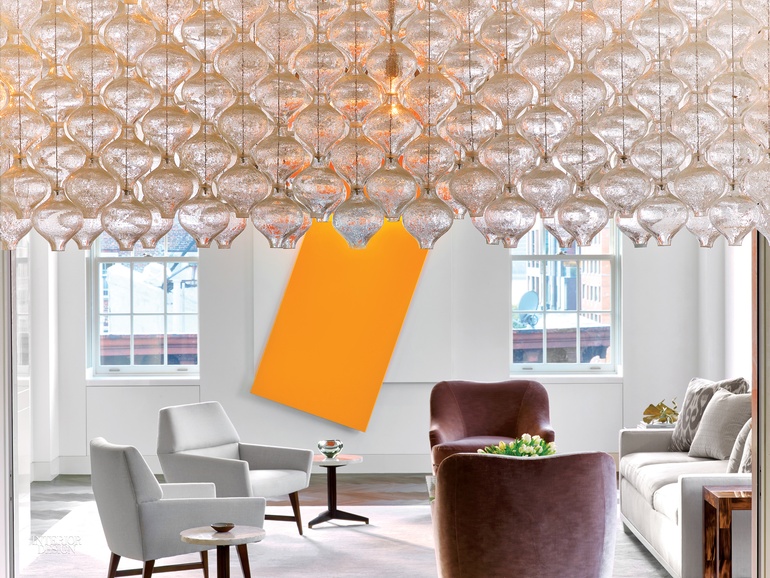 It sounds like a recipe for chaos. But when Eric J. Smith Architect teamed up with the interiors firm of Erik R. Smith on a New York pied-a-terre, the practically same-name team managed to produce an oasis of calm, a subtle backdrop for a rotating collection of contemporary art. Works by Andy Warhol, Roy Lichtenstein, and Ellsworth Kelly are shown off in surroundings that are architecturally immaculate. Yet there’s none of a gallery’s chill, thanks to an array of finishes that add a dimension sensed as much as seen.

The Messrs. Smith had worked with these clients before, both separately and together. Eric J. Smith—reminder, he’s the architect—had previously built the couple’s main residence, in Chicago, and their Colorado vacation house, projects typical of his “pared-down classical” style, he says. Erik R. Smith—yes, the designer—knew the couple well, too, having worked on their Colorado house and a previous New York apartment while employed by Interior Design Hall of Fame member David Easton.

The more contemporary approach for the current pied-a-terre was a departure for the couple—one that came with challenging technical demands during construction. “We just had to be dead-on with every joint and every transition. It’s not like having moldings at the edges,” architect Smith says. Meanwhile, designer Smith threw himself into finding artisans who could panel the foyer in parchment edged in nickel bands, cover the library walls in linen, and apply Venetian plaster in the master suite. “An enormous amount of time was spent procuring materials and completing the custom work,” he says.

Finishes aside, part of the comfort derives from existing virtues of the 1906 building, originally a seafarer’s residence and recently a home for the elderly. Among these are an abundance of sunlight and a generous 3,500-square-foot layout with a central hallway defining the enfilade of public areas on one side— living room, dining room, kitchen, library—as separate from the two bedroom wings on the other. This raw material, however, required shaping.

The Smiths considered themselves lucky to intervene while the upstairs neighbor was relocating some plumbing. As a result, a drain pipe could be removed from the central hallway’s ceiling to turn it into a smooth, flat surface befitting what was to function as a gallery. Today, a large-scale triptych by Christopher Wool lines a wall, and the long space terminates at an aubergine- lacquered wet bar presided over by a Jeff Koons monkey print. The kitchen and bathrooms could also be customized. A powder room got a shower, but it can disappear behind a sliding panel when there’s company.

The sliding panel and the rest of the walls were painted with a strie? technique, then buffed to a high gloss, a process that required the room to be constructed in pieces off-site, finished, and re-assembled. “Normally, I would do this only on furniture,” designer Smith says. For the kitchen, oak cabinetry was first wire-brushed, then stained gray and cerused to amplify the distressed look.

If the apartment had a drawback, it was the ceiling, as low as 8 feet in some rooms. Forgoing crown molding made the rooms feel taller, and several doorways were extended to nearly full height rather than surmounted with headers that would have made the openings look stubby. Recessed fiber-optic fixtures, installed instead of standard can lights in some areas, simultaneously allow greater height and bring flexibility. As artwork moves around, the fiber optics can be “re-aimed and refocused,” architect Smith notes.

Other lighting was chosen for decorative value. On the living room’s ceiling is a cluster of brass-ringed disks attributed to Gio Ponti. Even more eye-catching, suspended over the dining table, are the glass orbs of a vintage Austrian chandelier, bought from a dealer who claimed it came from the Las Vegas set of Martin Scorsese’s Casino.

For watching movies and sports, the clients did insist on a 50-inch television for the living room. In a formal space, intended for cocktail parties with art-world cognoscenti, how do you hide such a beast? In plain sight. Right above the fireplace—lit with a nontoxic, environmentally friendly chemical flame—one of the wall’s lacquered panels is movable, and behind lurks the TV. When it’s viewing time, the panel slides back, and the screen extends on a mechanical arm.