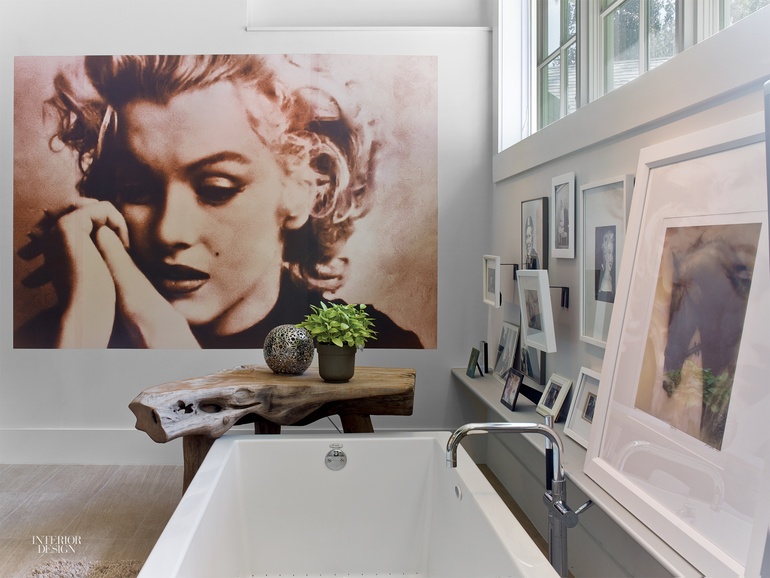 Earthy, straight-shooting gal that she is, Interior Design Hall of Fame member Laura Bohn cuts a striking and glamorous figure. The Texas native says she “plotted her escape at age 19,” completely sure, as only teens can be, that New York and design would be her life. She was right—after a detour that took her to Paris. Years later, as a doe-eyed interiors student at Brooklyn’s Pratt Institute, she embarked on her life’s true work. She studied under Joe D’Urso, whom she calls “the genius of the plan,” and John Saladino, a “master of color and reference.” Today, their insights remain lodestars for Laura Bohn Design Associates.

But back to 1978 for a moment. That’s when she found her personal destiny in Richard Fiore, a general contractor. He shared her love of renovation. Since meeting, they’ve redone their homes at least 10 times—one beauty is a 1907 beaux arts bank that they refashioned into apartments including an extraordinary penthouse. These kindred spirits also have a fetish for old stuff, such as unclaimed billiard tables and reclaimed wood, and find joy in mixing fine art and decor with mass-market objects, then tossing in what she calls “fakery with a purpose.” It’s a match made in heaven, Bohn and Fiore. A visit to their weekend house makes that instantly clear. For years, they had summered here and there around Pennsylvania’s Bucks County, a scenic region of rolling hills and horse farms along the Delaware River. Then, in the town of Ottsville, in an idyllic setting that called to mind Tuscany, the couple fell in love with a property that, best of all, could feed their shared addiction to nonstop remodeling.

“It was fall-down,rather than teardown,” she quips in signature deadpan, recalling the crumbling brick walls, the leaky roof, and the zero-charm interior, set on a concrete slab. Cue the demolition crew and bulldozers. The pair reasoned that, by excavating 4 feet while expanding, to 4,000 square feet, there would be enough height in the addition for more generous windows. As a result, the woody front yard appears at eye level from inside, where the floor steps up or down no fewer than 13 times—a cascade that reflects the exterior’s engaging tumble of metal-roofed volumes.

Such complex intersecting geometries bear witness to Bohn’s planning talent and Fiore’s building skills. Even the rafters, roof beams, and crawl spaces are perfectly finished and painted, Fiores’s deft handiwork. In place of traditional rafter ties, steel rods with turnbuckles span many rooms. That spare, industrial aesthetic carries through to the living area’s outsize stone hearth. Its exposed steel channel, highlighting the lintel, is actually nonstructural, a decorative flourish that she accented by gluing on ersatz bolts. As she reiterates, “I love fake.”

Think wood-look porcelain floor tile, too. But real wood is also everywhere. At least half the furnishings are wooden, among them driftwood side tables. Mahogany paneling, with horizontal battens, was salvaged from a football stadium, and other walls are beadboard. A slice of tree trunk, with bark intact, serves as a vanity counter in the powder room. Then there’s a trio of intact tree trunks reclaimed from a neighbor. They now emerge from the floor and disappear into illuminated ceiling recesses in front of the office alcove, setting it off from the living and dining areas.

With wood as the visual datum line, the materials palette embraces slate flooring, unfinished metals, and exposed concrete. Their quiet tones recede in favor of the framed views out the windows and the framed art on the walls, often delightful salon-style installations of smaller works. Some are new, some are borrowed, and still others come from Bohn’s colorful family album. She spent her Texas childhood surrounded by engineers— her father specialized in the dome stadium. One senses that this early exposure helped her conceive the many clever combinations and assemblages that make the Ottsville house unique. Eclectic curating is an essential part of her gift.

In short, her weekend place is equal parts inspired invention and clever juxtaposition. Imitation finishes contrast with exposed and weathered natural materials. Collector-grade furniture stands comfortably beside low-key items from popular retailers. “I like to mix high and low,” she says. “And there’s simply too much out there not to use synthetics.” The result is a comfortable home that feels zeitgeist-casual. A place to stay for a while, certainly. Maybe to expand or update a tiny bit more. Just for fun.