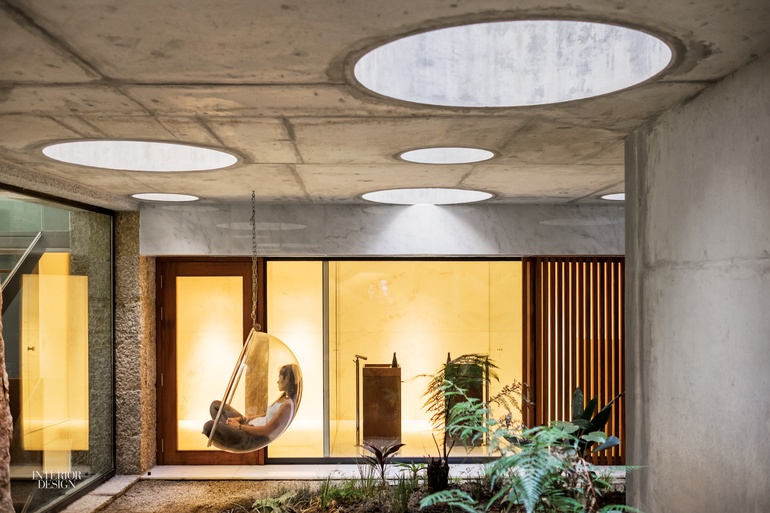 Two major strains of influence define design in Portugal. First is its rich architectural tapestry of dozens of stylistic epochs, reaching their apogee with the medieval Cistercian period. Second, recent forays into an elemental form of minimalism—led by the Pritzker Architecture Prize–winning masters Álvaro Siza Vieira and Eduardo Souto de Moura—have profoundly influenced the global design scene. When these two tendencies meet, the energy can be indomitable. A renovation in the countryside, a half hour’s drive from Porto, highlights this power while introducing the audacious, thoughtful talent of Elisabete Saldanha de Oliveira. In the very first project for her firm, ES1Arq, she used deft minimalist insertions, steeped in lessons from Siza and Souto, to transform an 18th-century granite farmhouse and its stable into a series of moments that are cinematic, at times surreal.


The property is on a hillside on the outskirts of Guimarães, which, it’s important to note, is a UNESCO World Heritage Site with a 10th-century castle hailed as “the cradle of Portugal.” Contemporary interventions are watched carefully here. And that certainly included Saldanha’s, a grueling seven years of labor from drafting board to punch list.

Because the farmhouse had been expanded several times over the centuries, and many parts had fallen into what she terms “an advanced state of decay,” she engaged historians and  archaeologists to help assess which elements carried the most significance, ensuring she met the municipal directives to preserve the original silhouette and primary materials. (And she budgeted accordingly in order to restore almost every major visible element.) Bureaucratic hassles aside, she waxes philosophical about how shapes or substances or techniques can be used to mediate and meld the past with the present, her main goal being to achieve a “special harmony with the existing fabric and surroundings.”


At the front, a crenellated tower and the roof’s clay tile dominate. The stable, to the side, became a garage for 10 cars, vintage and new. At the back, where the hillside drops away, she added a broad deck surrounding a swimming pool and built a pool house, a low volume clad in blackened-zinc panels. To fit in an indoor lap pool as well—plus a gym, a game room, a music room, and a winter garden—she excavated 5,000 square feet underground. This subterranean zone brings the house’s total square footage to 22,000.


These clean, elegant maneuvers create an admirable work of architecture as seen from the outside. Meanwhile, interiors are stunning and evocative. Dutifully rehabbing everything that had any historic value, she made an extra effort to maintain original lines as much as possible. She even selectively extended woodwork and masonry by replicating it, employing methods that date back to the 18th century. In part, that was to set the stage for her sculptural insertions. In the virtually all-white dining room, on the ceiling over a table long enough to seat 24, a new black ornamental carving appears. The intricately detailed wooden ceiling capping the tower is original, a striking counterpoint to the tower’s Donald Judd–esque staircase in dark Brazilian chestnut, painted steel, and glass.


Saldanha’s talents are most evident in the house’s many gorgeous staircases. In addition to the tower stair, there’s the entry’s spiraling white ribbon cast in re-inforced concrete, with marble steps. Guest rooms have their own stairs directly to the roof—these flights are angular and open, in white-lacquered steel shaped to form staggered treads. All have integral security gates, rather than the store-bought kind, for the sake of the three wee ones on the premises.


While the staircases are indisputably arresting, they are at peace with their place. “The contemporary elements fill in any voids in history, but they are made to interfere as little as possible with the spirit and character of the house. They let the existing style breathe,” Saldanha explains. Breathe indeed. Similar attempts, by lesser talents, can evince the struggle for balance. Here, the nuance comes easily. What one experiences is true harmony and resolution.

> See more from the November 2015 issue of Interior Design