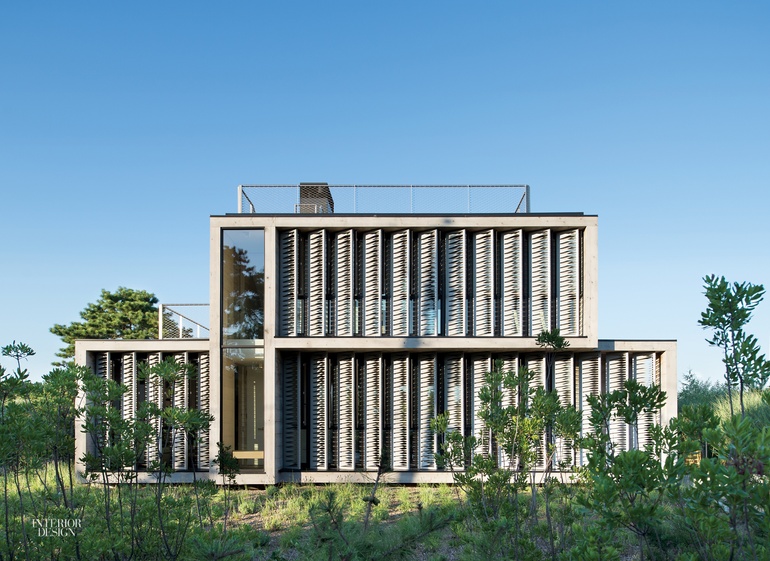 There’s a little pocket of Amagansett, New York, the last in the string of villages that make up the Hamptons, where the streets have names such as Seabreeze and Sandpiper, and diminutive cottages and capes are packed cheek-by-jowl on the sand, overlooking the Atlantic. Developed primarily during the 1960’s and 1970’s, the laid-back oceanfront enclave known as the Amagansett Dunes or Beach Hampton has avoided the area’s evolutionary continuum of modest structures being replaced by ever larger and grander manses. The pocket-size lots and the protected natural setting have kept real-estate developers at bay, as have the challenges of building at the beach: high groundwater, septic restrictions, NIMBYism, and the like. Still, plenty of buyers are willing to trade square footage for beach proximity. One city couple purchased a 1950’s cottage on a mere 1/7 acre with neighbors on one side and a 16-acre preserve’s huge sand dune, billowy beach grass, and windblown coastal pines on the other. The couple and their young son had spent a few summers in the cottage before hiring Bates Masi + Architects to build a new house there. Although zoning would allow only 1,700 square feet, Interior Design Hall of Fame members Harry Bates and Paul Masi made the effort worthwhile.

The design process began with their usual inquiries—from the movement of sun and wind across the site to the clients’ interests and lifestyle. “They are definitely of the generation that takes the environment into consideration, and that attitude had a lot to do with the design of the house,” Masi says. “We had serious discussions about whether or not we should have air conditioning or if it was necessary to have a dishwasher.” (A more typical Hamptons conversation would likely be about how many dishwashers.) Another focus was how to engage the preserve.

Bates and Masi discovered that it contained what is called a parabolic dune, sculpted by the prevailing wind over time. “The landscape looks the way it does because of the constant west wind,” Masi explains. “We then thought about how that wind should inform the architecture.” Figuring out a way to channel the cooling summer breezes but block the freezing winter blasts turned out to be the answer, accomplished with louvers that shield the west-facing front window wall. Set at an angle, they let the southwesterly summer wind flow past; northwesterly winter wind is deflected. They furthermore give the house its distinctive appearance and “provide a modicum of privacy,” blocking views from the street, Bates points out.

Developing the louvers was a painstaking procedure. An early decision was to make them canvas, twisted to leave diagonal apertures and stretched over rectangular aluminum frames. After refining the diagonal pattern in the studio, with the help of a CNC machine, Bates and Masi called on a sailmaker for a full-size mock-up—which he attached to the roof of his car and drove around for several months, testing the ability of the canvas to survive punishing vibration from wind. Impressively, the fabric did not shred.

The curtain wall behind the louvers also plays a significant role in controlling the volume and speed of airflow across the house in warmer weather. When the small operable windows set into the glass expanse are open, and the glass doors that compose the opposite, leeward, elevation likewise slide back, the pressure differential created promotes natural ventilation. Wind flows past the louvers, through the house, and out toward the dune. “You can get so much air moving through the louvers that they catch dust and sand—like a lint filter in a clothes dryer,” Masi says. More poetically, the breeze carries the scent of the lavender planted profusely in the front yard. More prosaic again: The reason the yard is raised is that it has accommodate a septic field, above the floodplain.

Other than the wafting lavender and the plays of light and shadow created by the louvers, the interior is extremely straightforward. Floors are bleached white oak, while accent walls are the same rough-sawn Western red cedar used for exterior siding. Most of the ground level is given over to the open living area, dining area, and kitchen. Alongside, the son’s bunk room and a guest room share a bathroom. Upstairs is the master suite—extending the full width of the house and thus receiving daylight from both east and west—plus a guest suite. Everywhere, built-ins maximize the openness. “It’s a study in efficiency,” Masi offers. He’s referring to spatial efficiency, but he might have been commenting on energy efficiency as well. Yes, Bates Masi installed a dishwasher and air conditioning. The couple does make use of the former. However, thanks to the house’s ability to harness the wind, they have yet to turn on the AC.