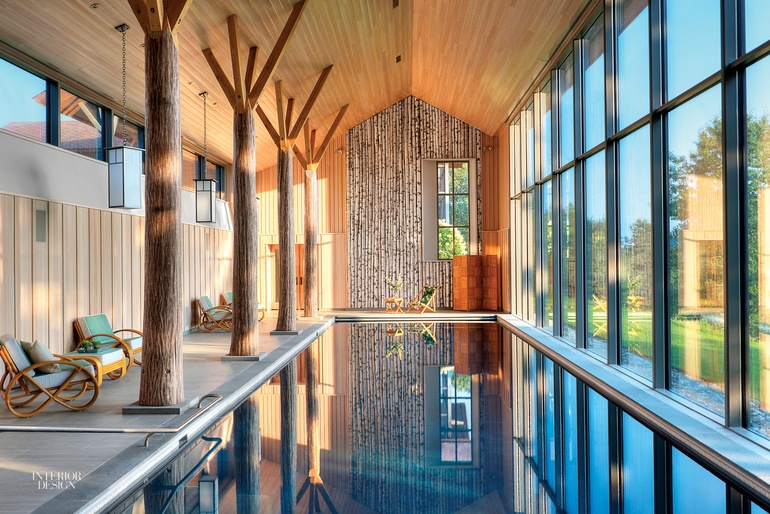 You could call it a secret pool house. Despite encompassing 2,750 square feet, it’s discreetly tucked into a hillside on a 115-acre estate in Chatham, New York. As seen from the handsome Adirondack-style main house, built years ago by Dennis Wedlick, the newcomer by his current firm, BarlisWedlick Architects, looks low enough to be a corncrib or a chicken coop, complete with a standing-seam gabled roof and board-and-batten siding painted a weathered red.

“Making the pool house an extension of the main house, in the same architectural style, would have ruined the proportions,” Dennis Wedlick says. “Looking like an extant agricultural building was the solution. As it settles in, it will actually appear older than the house.”

Although the pool house is essentially a separate structure, it’s reached from the main house by a passageway partially buried underground. So entering is a revelation. An enormous window wall, 18 feet high by 54 wide, bursts into view, framing a panorama of the Catskill Mountains. Equally breathtaking is the way materials are used to define a space that’s a contemporary riff on traditional rustic architecture, incorporating the firm’s expertise in Passive House principles.

Airtightness, enabled by the tunnel entry, is largely responsible for the building’s balmy temperature, 88 degrees year-round. “The fact that we are tucked into the earth on the north and east sides helps us thermally, too, while offering a sense of protection and enclosure,” Alan Barlis says. The window wall is triple-glazed and oriented westward to maximize solar gain. Ventilation from the ceiling prevents the glass from fogging up.

“It’s the fantasy of being outdoors,” Barlis continues. A tree-trunk colonnade, running the length of the 54-foot pool, literally supports the nature concept, augmented by the white birch logs lining the end walls. To add a retro resort vibe to the mix, the Paul Frankl rattan sofa is upholstered in a leaf pattern. That feels particularly tropical when there’s 3 feet of snow on the ground outside.


> See more from the Fall 2015 issue of Interior Design Homes