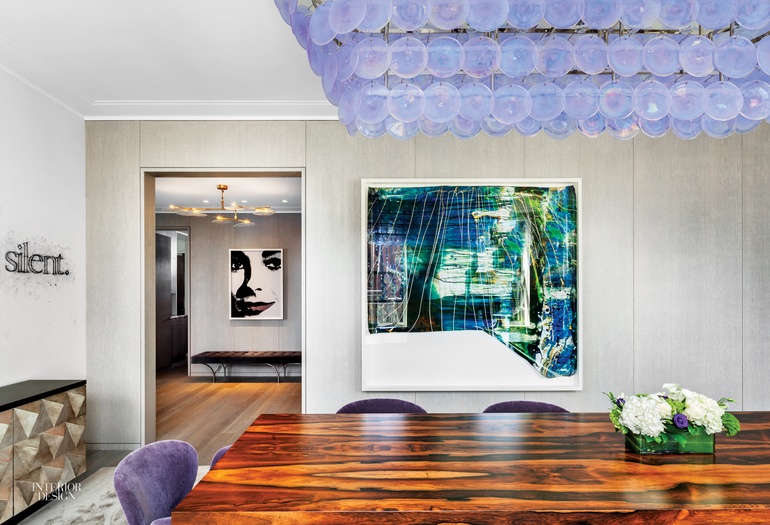 You don’t find a much better pedigree, in New York’s prewar luxury apartment market, than a 1916 building designed by Robert T. Lyons for the real-estate developer Bing & Bing. But the owners of this duplex were not hunting for provenance alone, architect Steven Harris says: “I looked at four or five apartments with them, including a floor-through in the building where Lee Radziwill lives. What appealed to them about this place was the light and the space to display art.”

However, the 4,500-square-foot duplex was in far from move-in condition. The decoration was the worst kind of faux Federalist, suburban auntie style, with hideous colors and too much chintz. “We know that two apartments were joined, probably in the ’80’s or ’90’s, and never touched again,” designer Lucien Rees Roberts says. Harris adds, “We took out everything.”

The two married Interior Design Hall of Fame members—who operate independently as Steven Harris Architects and Rees Roberts + Partners but collaborate on almost every project—made the upstairs of the duplex the public zone, an ensemble of dining room, living room, den, and kitchen. A guest room and bath are also here, but the other sleeping quarters are below. The master suite is particularly elaborate, featuring his-and-hers dressing rooms and bathrooms as well as a shared office. Adjacent is an additional guest suite, as visits from the couple’s two grown children are frequent.


“Domesticated modern” is how Harris describes the architectural approach. “There is a very shallow, abstracted cornice where the walls meet the ceilings. On the other hand, the baseboards are flush. There are casings around the doorways, but they are very minimal.” Windows, with no trim whatsoever, have only motorized shades. As Rees Roberts remembers, “Formal drapes and valances, which were here before, blocked the light and took up wall space.”


The couple had very definite opinions. They were not keen on color, for starters. “Black, white, and gray were basically it,” Rees Roberts says. So the walls are white, except for the softly cerused oak paneling in the entry gallery and the adjacent dining room and the limestone in the bathrooms. Floors are predominantly gray-stained white oak, sometimes topped by deeply silken neutral rugs.


In the kitchen, counters are honed limestone for the blackened-steel island and stainless steel for the wood-veneered lower cabinets. The uppers are particularly inventive. Mounted in front of a window that faces the building’s courtyard, they are etched glass, framed with more stainless, so sunlight shines through, but the view of neighbors is blocked.

“It took me a long time to grasp the clients’ sensibility,” Rees Roberts  admits. “Eventually I realized, for example, that they responded to Italian lighting from the ’60’s.” So he bought several chandeliers from that era. Even the newer chandeliers—notably by Lindsey Adelman Studio in the entry gallery and by David Weeks Studio in the den—echo the mid-century fixtures.

Furniture combines various un-usual mid-century finds with about half custom pieces. “For two reasons,” Rees Roberts explains. “One is the scale of the rooms. The other is the scale of the people who will inhabit those rooms. Most furniture on the market is too big for apartments. And our clients are more comfortable with sectionals that are narrower and lower than standard.”

He and Harris used quite a bit of jacaranda, a richly figured relative of Brazilian rosewood—and a favorite of theirs. Harris recounts, “We were once in São Paulo, in a little antiques shop, and found a cache of jacaranda paneling that had come out of a demolished Oscar Niemeyer house. We bought all of that and shipped it to New York. Then we bought a massive collection of veneers. Now jacaranda is protected. You can’t bring it into the States or ship it out.”

Another point of pride is found along the staircase of the duplex. On one side of the stairs, the more visible one, bronze frames an angular glass balustrade. On the other side, a bronze handrail is mostly wrapped in leather, stitched like a piece of art deco furniture by Jacques Adnet or something from Hermès. It feels great in your hand. “It’s the most beautiful handrail we’ve ever done in our lives,” Harris gushes. He has worked as an architect for over 30 years, with much of that time spent teaching at Yale University. About some things, however, he remains as enthusiastic as a schoolboy.

> See more from the Fall 2015 issue of Interior Design Homes