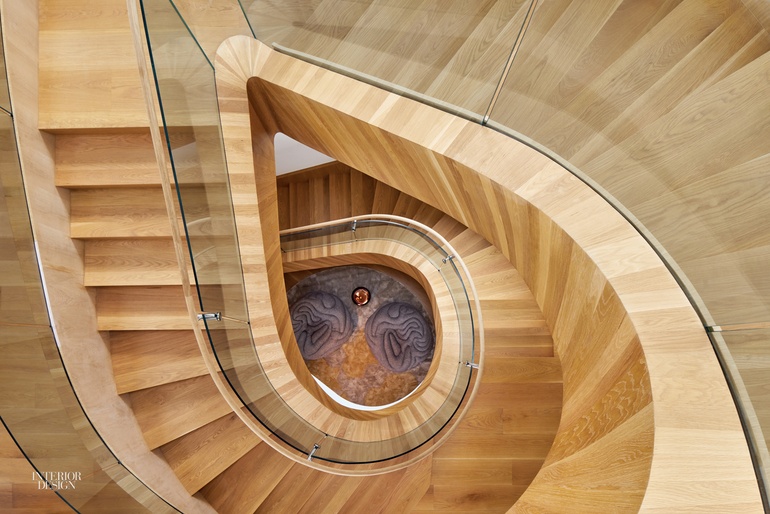 Almost 12,000 is ordinarily a daunting number of square feet to tame for a single-family house. But not when Interior Design Hall of Fame member Hagy Belzberg takes charge. Asked to site just such a behemoth on 4 acres of Los Angeles ridgeline, Belzberg Architects conceived the house as stacked volumes, basically a boomerang sitting on another boomerang, facing the opposite way. The innovative composition has, dare we say it, grandeur. At the same time, the complementary angles of the two volumes, with certain sections of the exterior screened by horizontal strips of limestone, create a tasteful sense of scale. The geometry of the boomerangs sets up the organization inside as well, particularly the ground level’s fluid space, with few dividing walls.

Geometry was not, however, the most important subject of conversation with the owners—she’s a surgeon, and he’s in finance. “Family, family, family. That was the big discussion,” Belzberg recalls. “The house needed to be a place where the kids want to be. And want to stay.” Talk eventually took physical form as three hangout spots: a family room off the kitchen, itself worthy of hanging out in; a playroom upstairs; and a sophisticated game room, complete with billiard table, in a basement that also boasts a gym and a sauna. The counterparts are a trio of work spaces: a study for the three children and his-and-hers offices for the parents, allowing them to integrate family into their professional lives. The husband’s study was to be large enough that the kids could come play while he crunches numbers. The wife’s was to be “command central,” Belzberg notes, around the corner from the study, during homework time, while overlooking the swimming pool.

Function zones determined, furnishings could be filled in. Those were the responsibility of Delta Wright, hired when the house was still under construction. (Then at Curated, a firm she cofounded, she now operates as Delta Wright Interior Design.) Everyone was on board with a vision that Belzberg describes as “lots of white with light wood floors” in keeping with the couple’s admiration for his fellow Hall of Fame member John Pawson—in fact, one of the few architecture books they own is on him. “My job,” Wright says, “was to bring nuance to the neutrals.” She accomplished that with combinations of vintage and contemporary pieces. The living room, for example, mixes Dutch armchairs, circa 1957, with an American leather-covered sofa from the ’70’s and a 21st-century one by Antonio Citterio. The dining area’s pentagonal table, a custom piece, draws inspiration from a ’60’s design by Joaquim Tenreiro, and Wright surrounded it with chairs from the ’70’s, having refinished their chrome frames in satin bronze. In the chillaxed family room, the kids watch TV from a generous, meandering sectional by Francesco Binfaré. They might as well learn early about good Italian design.


This being a Belzberg project, a staircase is, of course, the pièce de résistance. Rising through the core of the house, where the boomerangs overlap, the stair is a spiral. But not just any spiral. It’s asymmetrical rather than composed of perfect circles. “It goes from skinny to fat, narrow to wide,” he explains. “It forces you to pay attention.” Every single strip of European white oak cladding the spiral was hand-cut and hand-laid, and the balustrades are clear glass bent with heat. “The hardest thing I’ve ever done,” he states. Thanks to the glass and an oculus above, the stair furthermore doubles as a light well through all three levels, constantly reflecting and absorbing sunlight differently. Each trip up or down is a unique experience.

A simpler floating stair is a more direct route for the children to take from their study, the family room, or the kitchen to their bedrooms, each with an en suite bathroom, and the playroom, with its own deck. At the opposite end of the upstairs is the master suite, offering treetop views through glass walls. The bedroom’s sitting area features Paola Navone’s sprawling sofa and  ottoman, upholstered in a soft wheat-colored linen-cotton. The master bath-room, an exercise in simplicity, is lined in Italian white marble.


Wright must have felt she scored points with Belzberg on those restrained selections, because she suggested going a bit off-plan in the powder room—with a raspberry floral pattern, albeit an abstracted one. Belzberg’s initial response: “Wallpaper in one of my projects? Never.” From Wright: “Trust me.” And he did.