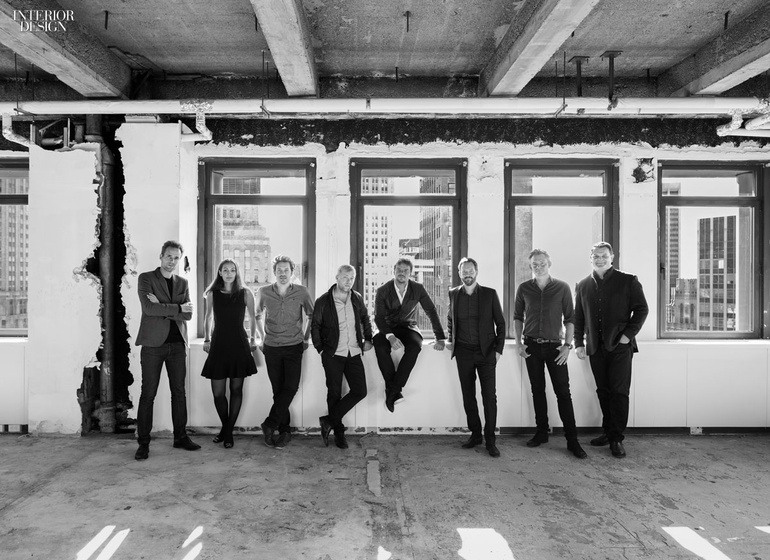 Celebrating its 10th anniversary, young for an architecture firm, the Bjarke Ingels Group has already been celebrated by a retrospective at the National Building Museum in Washington. That’s a long way from scrappy beginnings in Copenhagen. New York is now where the majority the staff works—on a wide variety of projects in North America. At the micro end, there’s a Kallista collection of bath fittings and accessories, Taper by BIG. At the macro end, currently on the boards are Google’s Silicon Valley headquarters, designed in collaboration with Heatherwick Studio, as well as a pair of notable New York projects: a swooping pyramidal apartment development and a World Trade Center tower, future home of News Corp. and 21st Century Fox.

A few blocks away from the World Trade Center, BIG’s new office occupies a high floor of a 1930’s building. “Our view is a real-life history of the evolution of the American skyscraper—the ideal location for an architect,” Bjarke Ingels says. The 22,000-square-foot interior is almost as raw as Ingels and his 11 partners first found it. “We’ve always been rather low-key,” partner Kai-Uwe Bergmann says. They added little more than a canteen, a shop where the foam models are laser-cut, a conference room, and a run of smaller meeting rooms. Seemingly multiplied by their glass fronts, BIG’s own pendant globes hang in rows like orderly planets. The concrete floor has been buffed, while the ceiling remains untouched. “You can see how bad the concrete work was,” Bergmann notes. “Because it’s so porous, though, the plus was that we didn’t need to add any acoustical material.” In the open studio for the 170 staffers, white worktables are organized by project. Other furniture is mostly Danish, whether Arne Jacobsen’s Series 7 chairs in reception or BIG’s chairs in the conference room.

The New York team keeps in touch with Copenhagen via the studio’s Skype-connected monitor. Nearby hang framed copies of magazine articles featuring BIG’s work across 20 countries. Printed on the wall covering are maps of the firm’s two home cities, downloaded from Google Earth.